Does there exist any relation between metallic property and oxidation potential?

I was having a revision on periodic table I was thinking about different properties I could connect most of I could not connect metallic property and oxidation potential .

The short answer is yes. The reason for this is that metals exhibit metallic properties because their electrons are relatively loosely bound to the atoms. A metallic bond is one in which the valence electrons are free to move throughout the lattice structure of the metal. Here's a schematic diagram from wiki commons: 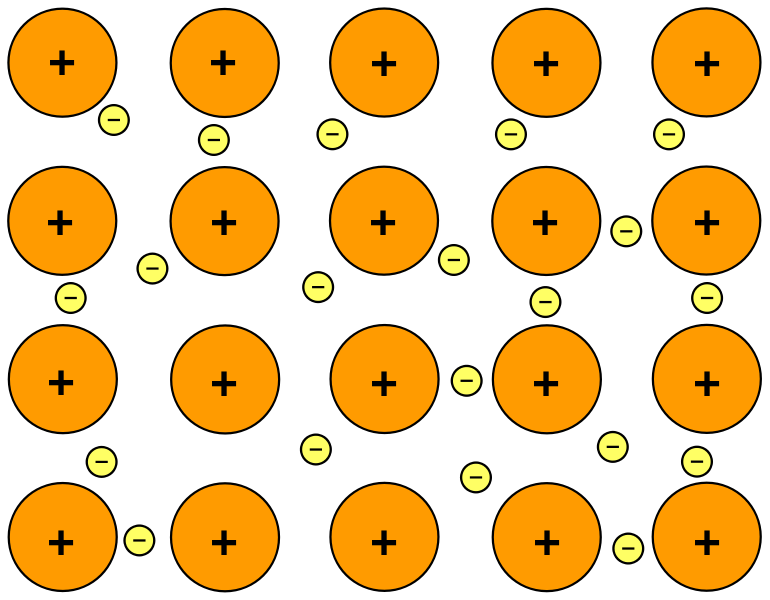 The idea is that the positively charged metallic "cores" (which includes the nucleus and the more tightly bound inner core electrons) are sort of suspended in a crystalline structure within a "sea" of mobile electrons.

This model explains most of the metallic properties we observe, from heat and electrical conductance, to malleability and ductility.

Of course, in chemistry, things are never that simple. There lots of details and it is tough to make general statements that are always true. For example, you can say that often times the more "metallic" an element is, the more easily it will be oxidized. However, when you compare elements using a standard electrode potential table (which gives us a way of measuring relative ease of oxidation) you find that it is easier to oxidize calcium ($-3.8 \space \rm{V}$) than it is to oxidize potassium ($-2.9 \space \rm{V}$), even though potassium is closer to the "metallic side" of the periodic table, it has a lower first ionization energy, and it is less electronegative.

This illustrates a limitation of thinking of elements in terms of metals and non-metals: it is really a shorthand way of describing all of the things that affect how tightly those valence electrons are bound to the atom, in comparison to how badly other elements "want" to remove them. With that amount of generalization, we lose too much detail to be able to make accurate predictions in every situation.

1) The complete, net removal of one or more electrons from a molecular entity (also called 'de-electronation').

2) An increase in the oxidation number of any atom within any substrate.

Therefore, it might be useful to examine first ionization energies of metals to determine their oxidation potentials.

Consider for example the oxidation of the alkali metals. Sodium has a highly positive oxidation potential.

This highly positive oxidation potential makes intuitive sense; a positive potential indicates a spontaneous reaction. The above reaction is definitely exothermic, thereby satisfying one criterion of spontaneity; solvated sodium ion is more stable than elemental sodium. The above reaction is also likely entropically favorable; solvated ions have more degrees of freedom than a solid.

Finally, note that the first ionization energy of sodium is $496 ~kJ/mole$.

The first ionization energy of potassium is $418 ~kJ/mole$.

As we can see, a lower first ionization energy seems to corresponds with a more positive standard electrode potential.

This makes intuitive sense; the oxidation half-reactions examined above are fundamentally ionization reactions. And the easier it is to strip an electron; the lower the first ionization energy, the greater the standard cell potential.

However, this trend doesn't necessarily hold in all cases. Consider, for example, the oxidation of lithium.

Lithium is the smallest alkali metal on the periodic table. Accordingly, it has the highest first ionization energy of all the alkali earth metals ($520 kJ/mole$).

Nonetheless, it still has the highest oxidation potential (greater than three volts!). So it seems that we can only use ionization energies as a rule of thumb.

Here's an example in which ionization potential can work:

Do you think that fluorine would rather lose an electron (be ionized) or gain an electron? Gain is the answer. By gaining an electron fluorine becomes isoelectronic with a noble gas. Sure, fluorine could also lose all seven of its valence electrons to be isoelectronic with helium, but that's obviously a more roundabout path to stability. Given this information, you can probably deduce that fluorine would rather be reduced than oxidized. And this is true; fluorine is a powerful oxidizing agent.

Not the answer you're looking for? Browse other questions tagged periodic-table periodic-trends or ask your own question.