Do the differential expressions of second law of thermodynamics imply a smooth increase in entropy? [closed]

Ask Question
Asked 7 months ago
Active 7 months ago
Viewed 34 times
5
$\begingroup$
Closed. This question needs to be more focused. It is not currently accepting answers.

Another statement of second law of thermodynamics can be formulated in terms of system properties and not properties + surroundings (isolated system). For a closed system at constant temperature and pressure:

Are $n_i$ constant during a process? We know that during a chemical reaction Gibbs free energy take its minimum value at equilibrium. But during the reaction the number of molecules $n_i$ change. So would it better the inequality to take the form of:

I have trouble in the interpretation of $dG \leq 0$. When I was introduced in thermodynamics I always thought of the spontaneity inequalities in the following manner.

In other words Gibbs free energy decreases until it takes its minimum value. And because we can plot $G$ as function of $ξ$ the reaction will proceed in the direction where $G$ is minimized as shown in the following figure (the left figure):

Although the above interpretation seems intuitive I have some problems.

$1$st Problem With the above interpretation is not clear if the equality should be interpreted as that the function have a constant value over an inteval or that it has reached a minimum value. For example if we were monitoring $G$ over time and we noticed that $G$ has a constant value would this imply that the system have reached equilibrium? Look at the following figure: 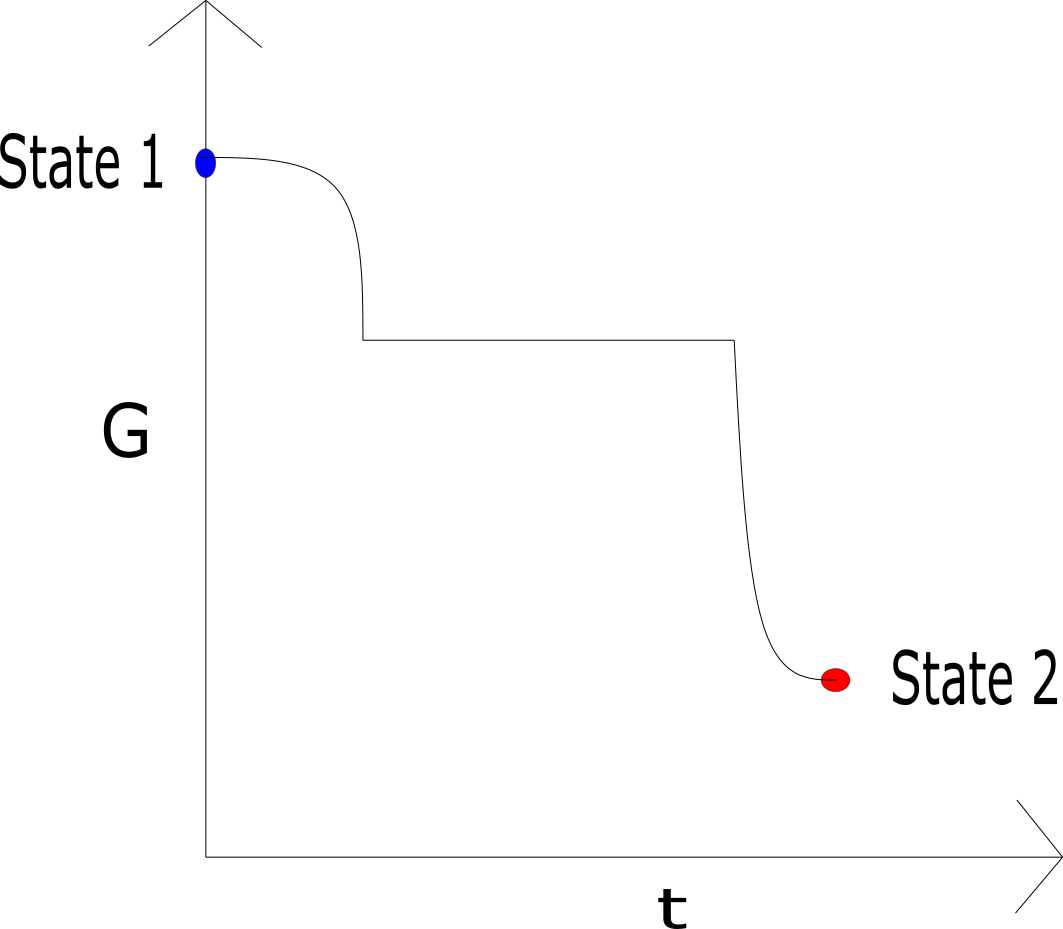 In the mid region of the function (where it is constant) the differential is zero. So how $dG \leq 0$ should be interpreted? In general we can't find a function $φ$ so that $G=φ(t)$ and this should be expected as Thermodynamics doesn't deal with how the state of the system varies with time.

$2$nd Problem In the first scheme I have drawn an alternative path (right figure) that the system could take in order to minimize $G$. In that case there is an abrupt change in the extent of the reaction but still the systems keeps decreasing its $G$. To be honest I haven't seen any reaction reaching equilibrium in that way but I can't find a reason why it should not behave this way. It should be noted that the line representing the path depicts the change in $ξ$ in an abrupt manner and it should not be confused with a continuous change (think it like a $5$ step process).

In summary I want to make clear how to interpret the differential expression of the second law. Is a smooth incease of entropy (of surroundings + system) over time assumed?

Browse other questions tagged physical-chemistry thermodynamics equilibrium or ask your own question.

6
How can we justify setting the affinity $\sum_i \mu_i \nu_i$ equal to zero at chemical equilibrium?
3
Does the free energy of the universe decrease for every process?
5
Why does the Second Law of Thermodynamics hold true?
2
Regarding the infinitesimal form of the First Law of Thermodynamics
0
Why isn't standard Gibbs energy zero at equilibrium?
2
Entropy Changes in Electrolytic/Galvanic Cell?
8
Why is standard state useful?