For the Tosylate ion, the negatively charged oxygen is stabilized via resonance with the oxygen atoms. But what are the orbitals of sulfur that are involved in the overlap? Is the sulfur $\ce{sp^2}$ hybridized and thus have a p-orbital for resonance?

If it is $\ce{sp^2}$, would that mean that it is possible for the electrons in oxygen to delocalise into the pi-electron cloud of benzene via the continuous overlap of p-orbitals in sulfur, carbon and oxygen atoms?

I hope you know the meanings of the terms $\sigma$ bond, $\pi$ bond and how to find hybridization of an atom. If not, you can get numerous good resources on Google.

To find the number of hybrid orbitals, we take the sum number of $\sigma$ bonds + number of lone pairs. Here, sulphur has six valence electrons, all bonded. So there are totally 4 $\sigma$ bonds and zero lone pairs. Resulting in hybridization $sp^3$, giving it a near-tetrahedral geometry (near because the aryl groups and oxygen atoms different, slightly distorting it from perfect tetrahedral). Since it is tetrahedral, the oxygen and phenyl group are not in the same plane, so the continuous overlap which you suggested is not possible. 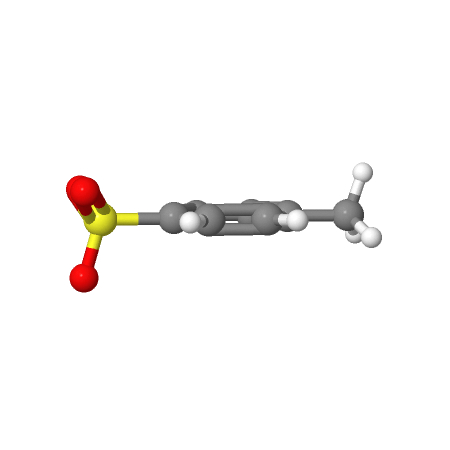 What you are asking is if the electrons of the oxygen atom can delocalize into the benzene ring. Firstly I need to mention that the negative charge is equally distributed on all three oxygen atoms, due to equivalent resonance. Now, from the canonical structure you have given in the question, there can be two cases of oxygen's electrons delocalizing into the benzene ring:

Hence in no case is it possible to have electrons from oxygen atoms delocalizing into the benzene ring.

Simply put, the oxygens' lone pairs are NOT delocalised into the benzene ring, and the stabilisation of the sulfonate group must be allocated more to ionic interactions(or loss of such; see below) than to resonance effects(the latter of which does not really matter that much, due to the instability of the "toluenide anion"-containing resonance canonical).

As many people have pointed out in many different answers posted on this site, there are no double bonds in sulfate groups and the like- the sulfur has a +2 charge while the oxygens have -1 charges each. These charges attract each other, resulting in the "double-bond-like" sulfur-oxygen distances. If an electrophile attacks and bonds to the oxygen, then the oxygen would not be able to have a negative charge anymore, resulting in destabilisation from the loss of an electrostatic attraction interaction.

Note: all of the above is true because the "toluenide anion" is unstable. In situations like the trifluoromethanesulfonate anion, the three oxygens' sp³ lone pairs, in the same direction as the carbon-sulfur bond, CAN delocalise into the sulfur-carbon antibonding orbital(which is mainly of sulfur 3p character; remember that one side of a 3p orbital has one node, just like the whole of a 2sp³ orbital), since the "trifluoromethanide anion" is relatively stable due to the inductively electron withdrawing fluorines. In support of this argument, optimisation calculations done on Mopac using the PM7 level of theory indicate that, while there is a charge <-1 on each oxygen in the toluenesulfonate anion(i.e. no delocalisation of the oxygen lone pairs), while there is a charge slightly >-1 on each oxygen in the trifluoromethanesulfonate anion(i.e. some delocalisation of the oxygen lone pairs).

2
Resonance stabilization and size of ligand atoms
3
Acidities of amines and carboxylic acids
2
Reaction an ROH-resonance-stabilized Group with Hydroxide/Acid-Base Reactions
4
Reactivity of thioesters with respect to nucleophilic attack
0
Generalizations regarding functional groups on benzene ring
4
Can a molecule be achiral whilst it's resonance form chiral?
0
Can a reaction have carbocation resonance followed by a hydride shift?
0
Role of 'p' Orbitals in Graphite Carbons