The multiplicity is fundamentally defined as $2S + 1$ where $S$ is the total spin.

From what I understand, the multiplicity corresponds with the number of unpaired/paired electrons. For example, in the case of $\ce{Cu^2+}$:

However, my professor has mentioned that the electrons that give the ion the final charge (positive or negative) can be considered as unpaired, thus in the case of $\ce{Cu^2+}$, there are 2 unpaired electrons giving it a triplet $M=3$. I am having trouble understand how this arises, both physically and mathematically.

In addition, in the case of polyatomic ions, how do electrons pair? For example, in the case of $\ce{SO4^2-}$, looking at the MO digram, all the electrons are paired, including the 2 electrons that give it the final charge. However, I was told that the multiplicity should be 3 as it should be treated as having 2 unpaired electrons. 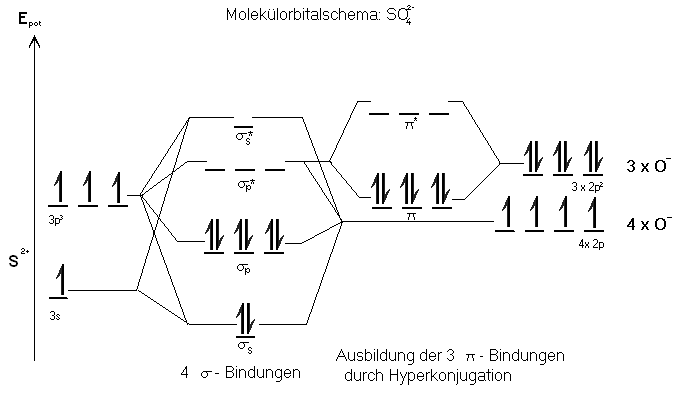 I am more confused with regard to positive ions, such as $\ce{Al^3+}$, as I was told that the positive +3 charge can be regarded as having 3 unpaired electrons and thus $s=\frac{3}{2}$ and multiplicity of 4.* Since the electrons have been removed, I am having difficulty understanding where unpaired electrons arise from.

From what I have read, coupling does not affect this, and I cannot seem to find any explanation or equations that might support this. May I know if anyone has an explanation for this? Thank you!

*more accurately, maximum spin where all electrons have parallel spin

Browse other questions tagged physical-chemistry computational-chemistry molecular-orbital-theory spin or ask your own question.

4
What accounts for the high spin state of the complex Tris(acetylacetonato)iron(III)?
4
Why do halogens have odd numbers as oxidation number?
4
Term symbols: counting electrons. How?
6
How do restricted open shell calculations mathematically proceed in the context of the self consistent field iterations?
7
When does Hartree-Fock fundamentally fail?
6
Molecular orbitals of the enolate ion
4
How to calculate S² value of a broken-symmetry wave function?
4
What repulsion keeps non-hydrogen atoms at a distance: between inner shells or between nuclei?