Why and how does ring expansion occur in the dehydration of (cyclobut-3-ene-1,2-diyl)dimethanol?

Can someone explain how does this ring expansion occur with the mechanism? I do understand that the hydride shift occurred because of carbocation stability but why did the ring expand? Can you please attach a mechanism if possible? 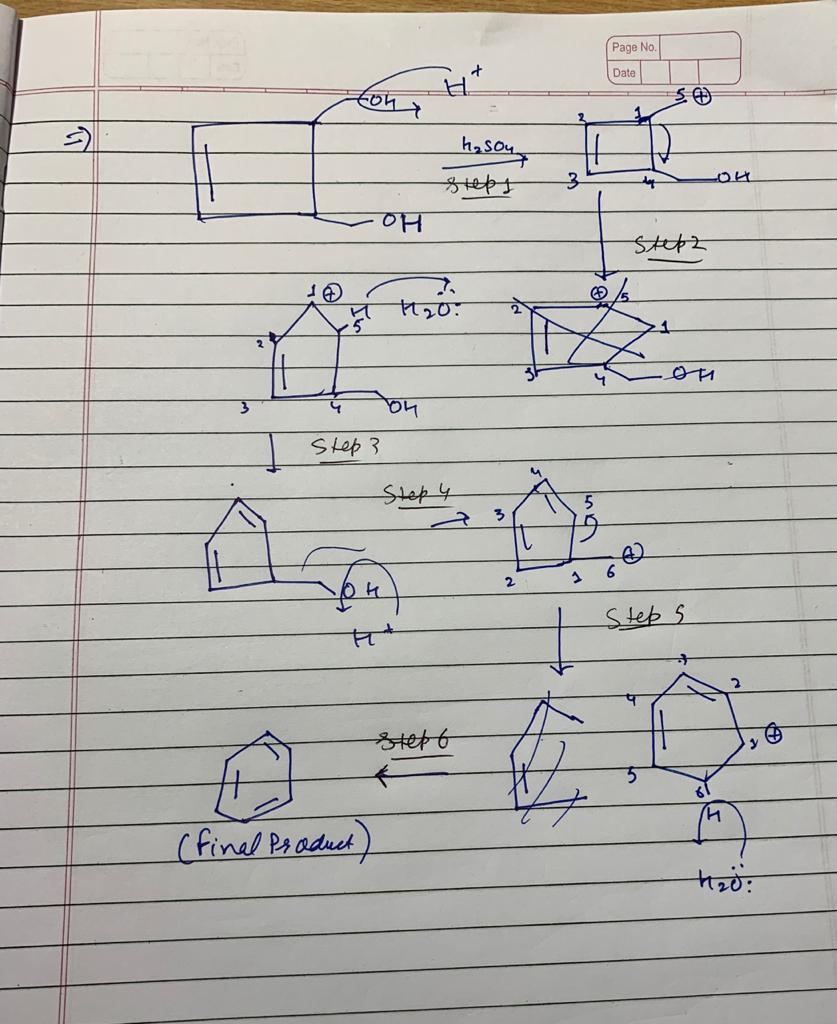 I tried writing the mechanism in my own way. Can someone verify if it is correct?

Now strain isn't one single thing but a combination of many different factors which are nicely summarized by this[1] paper.

Types of strain
... the total strain of a conformation is the sum of:

Different rings undergo expansion to overcome different types of strains. The major driving forces in smaller rings is the angle strain and the eclipsing strain.

Small rings are rigid and highly strained. They are characterized both by a large deviation from the ideal tetrahedral valency angle—a high angle strain, and eclipsing interactions—a high torsional strain.

For example, cyclobutane expands to cyclopentane because of reduction in angle stain and torsional strain.

Angles in a regular pentagon are 108°. That is very close to the ideal tetrahedral angle of 109.5° and, therefore, if cyclopentane were planar it would not exhibit any significant angle strain. However, in a planar cyclopentane there would be a high degree of torsional strain. All ten of the carbon–hydrogen bonds would be in eclipsing conformations.

Regarding the mechanism, the following reaction pathway is followed to obtain the product:

Later OP proposed a mechanism of their own and asked in the comments to verify it:

The mechanism you propose looks a bit incorrect. The arrows are pointing in the opposite direction. I have never seen an arrow hanging the $\ce{H+}$ to an $\ce{-OH}$ used to signify protonation.

The mechanism for the given reaction would be as follows.

Why does this happen? This is because a four member ring has a high amount of ring strain. Expanding itself to a 5 member or (if possible) a six member ring is highly advantageous as it helps alleviate some of this ring strain.

Now, in this case there is also the added advantage of the six member ring being aromatic (benzene).

A similar example has been discussed here: Formation of toluene from (cyclobutane-1,2,3-triyl)trimethanol using conc. sulphuric acid

Not the answer you're looking for? Browse other questions tagged organic-chemistry reaction-mechanism alcohols stability rearrangements or ask your own question.

2
Ring expansion in the reaction of (hydroxymethyl)cyclobutane and HBr
6
Formation of toluene from (cyclobutane-1,2,3-triyl)trimethanol using conc. sulphuric acid

10
Ring expansion from a given cyclic carbocation
11
Can a six member ring expand to achieve octet completion to stabilize a carbocation?
4
How do I decide whether ring will expand in this reaction or not?
0
Is 1,3 alkyl shift allowed in Cyclobutyldicyclopropylmethyl Cation?
0
Ring expansion in cyclo compounds