The question asks what nitrogen in the ring of histidine has the shortest bond length.

I was thinking that since it has resonance, the initial thought of the nitrogen with the $\pi$ bond is incorrect. However, I imagine the resonance structure shown in the figure below makes the greatest contribution to the resonance hybrid. Therefore making my first guess correct. The question also asks for a single line of reasoning so I am confused how to present my thinking concisely. 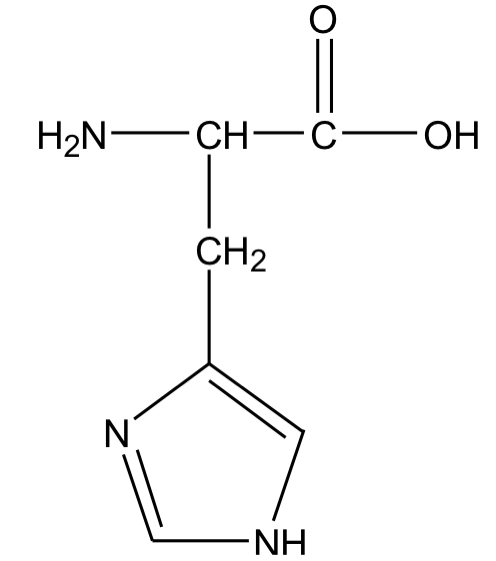 It is correct that the $\ce{N}$ with the double bond has a localized lone pair, because of its $sp^2$ hybridization, due to which the lone pairs are in the same plane as ring, and hence not conjugated.

However, the other $\ce{N}$ is clearly in conjugation, hence, if you draw the $5$ possible resonance structures, you would notice that each bond in the ring is a double bond for exactly $2$ of them. However, since there is a positive charge on electronegative $\ce{N}$ in all of them except the one you have drawn, this structure would have maximum contribution. Thus, the shortest bond length indeed would be the one you've shown as a double bond in your figure, although in reality it would have bond order $<2$ due to resonance.

Not the answer you're looking for? Browse other questions tagged organic-chemistry bond resonance aromaticity amino-acids or ask your own question.

9
Is the hybridization only related to atomic orbitals but not to the molecular orbitals?
9
Why and when are bonds broken
0
Strength of substituted Carbon Double Bonds and C-halo bonds
3
Do indigo and leuco-indigo have fully conjugated pi systems?
8
Why does HNO2 not have resonance?
1
Are the C-C bond lengths different in 2-methyl propene
2
Confused about identifying delocalized electron pairs in Isoniazid
0
Average bond energy of H−F and H−O hydrogen bonds
3
Why does delocalization (only) occur in molecules represented by resonance hybrids?