Whats the difference between unit cell and motif?

Conceptually, the unit cell is the larger object, the (if relating to 3D crystals), the parallelepiped containing the crystallographic motif. It is the unit cell which, by mere translation along $\vec{a}$, $\vec{b}$, and $\vec{c}$ builds the crystal. In an analogy, unit cells stash like shoe boxes next to / on top of each other.

In addition to the outer shape and apparent symmetry of the unit cell (the Bravais classes; i.e., triclinic, monoclinic, orthorhombic, tetragonal, rhombohedral, hexagonal, or cubic) the unit cell contains symmetry operators in its inner (the proper rotation axes, mirror planes, centres of inversion, screw axes, rotoreflection axes, glide planes) which act on the crystallographic motif. In an analogy, these symmetry operators are instructions how to copy and paste the motif within the unit cell. The motif itself is a smallest representative design pattern within the elected unit cell.

As an example, the illustration below shows how the $c$-glide plane relates two molecules of maleic acid in respect of their position within the unit cell, as well as in respect to their orientation relative to each other: 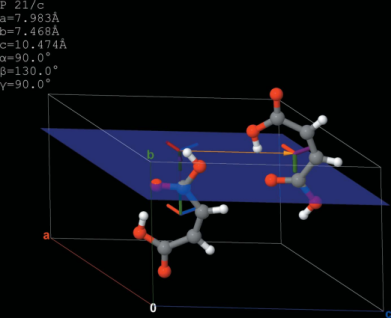 Depending on the the space group symmetry within the unit cell, the position and the symmetry of the molecules within the unit cell, you may encounter motifs which on first inspection might look like incomplete. For example, if a centre of inversion (molecular level) coincides with a centre of inversion (unit cell level). The molecule then still is fully described in its geometry, because of the exact completion by the symmetry operators. As an example, see the following triptych:

Here, the left image depicts the crystallographic motif alone. In the centre, you recognize the triazine molecule, «complete» as if you would draw it in a reaction scheme; but it has been «completed» by applying the symmetry operator of the unit cell. In the right image, using the same perspective (i.e., again the same direction of observation) you see the complete unit cell when all symmetry operators are applied. It depends on the software used how (if possible all three of) these levels are visualized with ease.

Not the answer you're looking for? Browse other questions tagged crystal-structure crystallography lattices or ask your own question.

1
Unit cell of CdCl2
2
Bravais Crystal Lattices and Voids
1
Why lattice constant (unit cell) is always a parallelepiped?
3
Does a molecule need to be placed symmetrically in the unit cell?
0
How can I find the smaller symmetric structure from big crystal unit cell?
1
Unit cell structure of ionic crystal