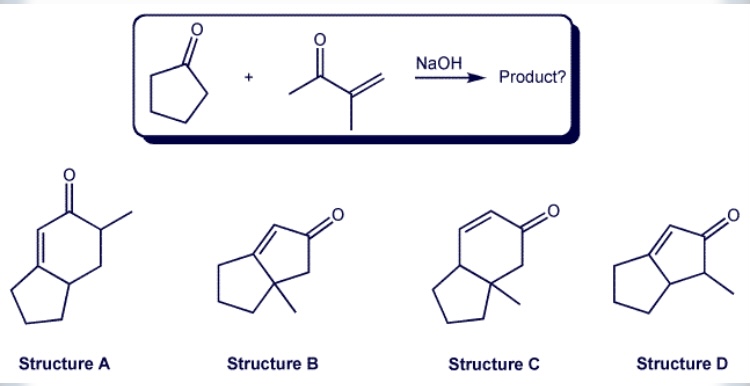 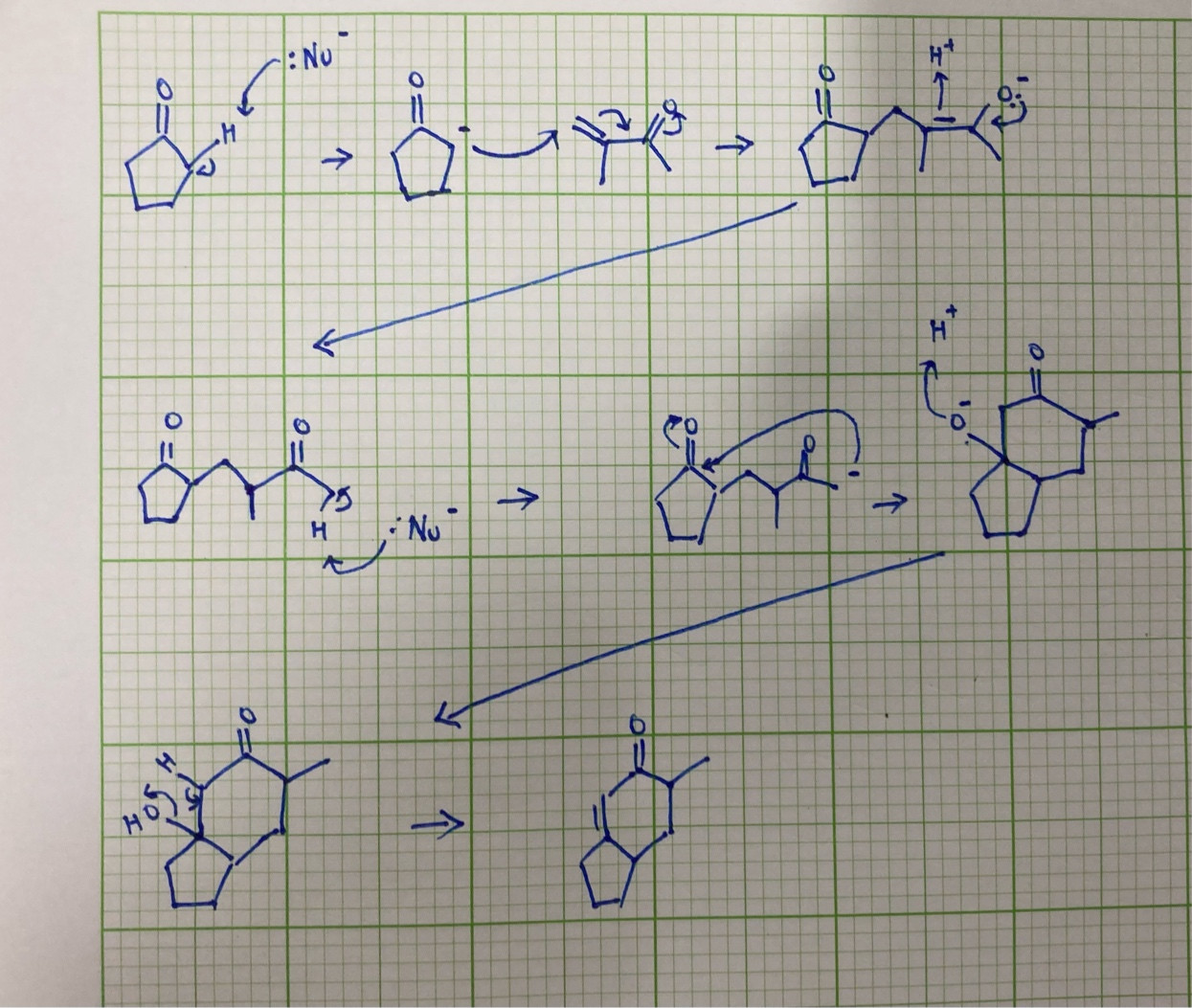 I am interested in why the most right alpha hydrogen is removed to form the carbanion prior to intermolecular aldol condensation (2nd row first molecule).

Why is it that the alpha hydrogen from the secondary and tertiary alkyl substituted carbon is not removed instead?

I would think that in deciding which alpha hydrogen is removed, the most acidic is removed. Considering that a more stable conjugate base would result in a more acidic alpha hydrogen, wouldn’t the tertiary and secondary substituted alpha carbons be more acidic then? Since the carbanion formed has better charge dispersal than the non substituted alpha carbon on the right (I carried over the idea of charge dispersal from acidity in halogens where a bigger volume can stabilise a charge). also since the carbanion is not electronegative, the alkyl groups would not donate electrons towards the alpha carbanion to destabilise it.

I'm interested in the OP's curiosity. I'd agree with Waylander about disfavoring to make 4-membered rings. Yet, it is possible to have two six-membered ring products. The first $\alpha$-proton abstraction followed by Michael addition resulted the first intermediate as OP suggested:

Now, this newly formed intermediate contain 4 types of eligible $\alpha$-protons, namely, $\ce{H_a, H_b, H_c,}$ and $\ce{H_d}$. Amongst them, only $\ce{H_a}$ is primary, while $\ce{H_c}$ is tertiary and the rest, $\ce{H_b}$ and $\ce{H_d}$, are secondary. The base would abstract each proton in rates according to the dissociation energy of each (e.g., the fastest rate with tertiary and the slowest with primary) but all abstractions are in fast equilibrium as shown in the scheme below: 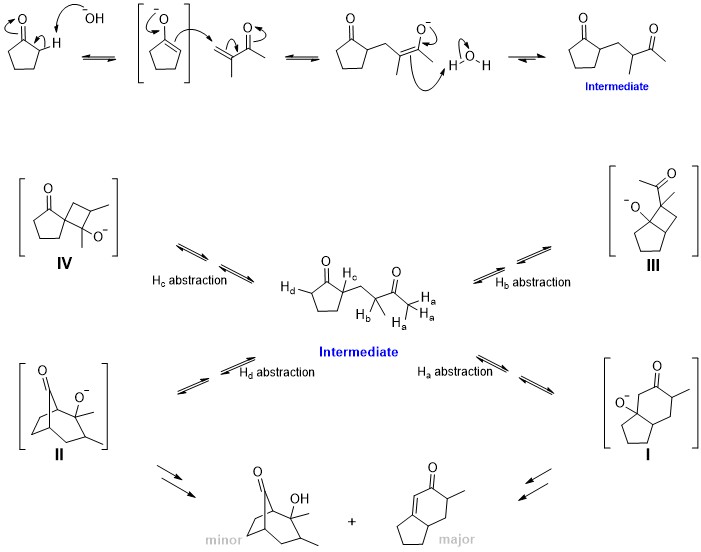 $\ce{H_a}$ and $\ce{H_d}$ proton abstractions resulted the formation of intermediates $\bf{I}$ and $\bf{II}$, which would abstract from a proton from water to give the corresponding aldols. Intermediate $\bf{I}$ is the most stable among others and resulted aldol would undergo further dehydration to give the corresponding $\alpha,\beta$-unsaturated ketone as the major product (as correctly suggested by the OP). Meanwhile, formation of the intermediate $\bf{II}$ is slow compared to that of $\bf{I}$ due to greater ring strain (even though it is a six-membered ring formation, the resulting intermediate is a bicyclic product with a bridged-head). Nevertheless, some would form to give the corresponding aldol as a minor product, which would not undergo dehydration because $\alpha$-hydrogen is locked in a position that restrict the elimination.

On the other hand, although abstractions of $\ce{H_b}$ and $\ce{H_c}$ protons are possible and in fast equilibrium, the formation of intermediates $\bf{III}$ and $\bf{IV}$ are very minute depending on the corresponding activation energies. The rates of these formations are very slow or not exist compared to other two, mostly due to very unfavorable 4-membered ring formation.

The two deprotonated species are in equilibrium (along with the neutral parent molecule). The deprotonation you suggest will occur, but the forward reaction cannot because it would be forming a [4] ring which is dis-favoured. The reaction moves forward through the other anion even though it may be the minor component of the equilibrium mixture.

Not the answer you're looking for? Browse other questions tagged organic-chemistry aldol-reaction enolate-chemistry or ask your own question.

4
Why are tertiary alkyl halides obtained in higher yield than secondary or primary during free radical halogenation of alkanes?
8
Does aldol condensation give different products in different conditions?
1
Why are the secondary alpha hydrogens more acidic than primary alpha hydrogens (keto-enol tautomerization)?
0
Arranging the phenol derivative in decreasing order of acidity
4
Acidity of aldehydes and ketones and enolate formation
8
What does the intramolecular aldol condensation of 6-oxoheptanal form?
2
Regioselective enolate formation, choosing major and minor products