I uploaded pictures on http://www.physicsforums.com/showthread.php?t=765106

I was looking at the answers in my textbook. They seem to make incongruent choices of solvents.

In e) and j), why choose EtOH and H2O/CH3OH? I would rather choose an aprotic solvent like DMF to better allow Sn2 to occur. Especially with j), there is a lot of competition with E2 because OH- is a strong base and because we are attacking a secondary carbon.

I see this again in k). Secondary carbon attacked: why not add DMF to prevent E2 and get best yield? 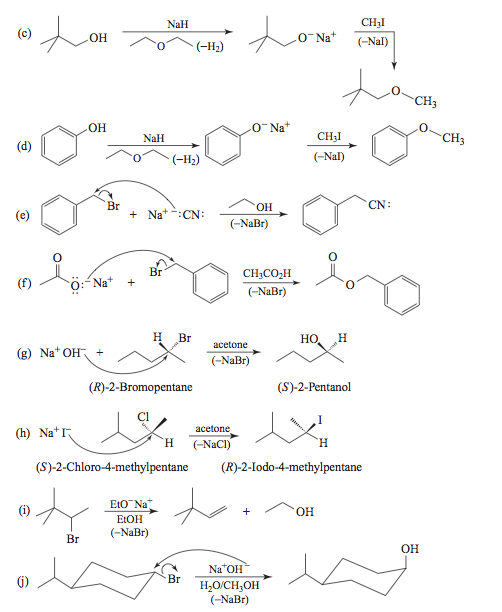 Your thinking is not wrong. For (e) DMF is a better choice of solvent - this doesn't mean that MeOH won't work just that DMF is better and is typically used in these reactions. For even better results you can use DMSO. If you dare, as DMSO/cyanide is a very toxic cocktail. (j) I don't think it is a practical synthetic reaction since it can possibly give you elimination and/or $S_N1$ (ie no inversion of stereochemistry) products.

For reaction (e), given the strength of the nucleophile, the primary benzylic leaving group, and the lack of any protons beta to the leaving group, SN2 is the only mechanism that can operate. The choice of ethanol as solvent likely has much more to do with getting everything into solution than influencing one pathway over another. According to Wikipedia, NaCN is soluble in EtOH but only slightly soluble in DMF.

For reaction (j), I would guess that the water/methanol mixture was chosen to get everything into solution. There might be some concern about hydroxide deprotonating methanol, and then methoxide carrying out the displacement. My answer would probably be to use a water/THF mixture, if you were really worried about that.

4
How to figure out if the reaction proceeds via SN1 or SN2 mechanism?
0
SN1 or SN2 reaction?
3
Does Wurtz-Fittig-reaction involves Sn1 or Sn2?
9
What are SN1' and SN2' reactions?
1
How to be able to tell if a molecule will react via SN1 or SN2?
1
How to determine if a reaction proceeds via SN1, SN2, E1 or E2 mechanism?
1
SN1, SN2 and enantiomeric excess
1
Why can't the N- end of the nitrile anion attack the alkyl halide in an SN2 fashion during an alkylation reaction when OH- can?