Mechanism of reduction by elemental sodium

How exactly does sodium form an alkoxide from an alcohol? I understand the general idea - sodium has a low first ionization energy. Sodium can thus give up its electron to something that'll take it. Sodium can therefore somehow cause hydrogen gas to leave.

How exactly does this mechanism work? I'm imagining that because alcohols are weak acids, that some hydrated protons exist in solution, and that sodium can donate an electron to these hydrated protons, which then can pair up with each other and form hydrogen gas. Is this accurate? 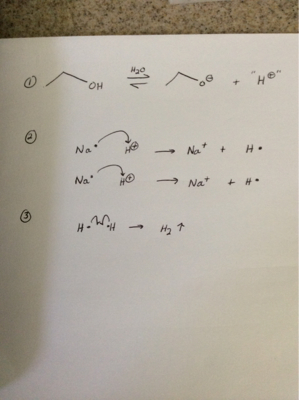 When alcohol molecules adsorb on the surface of the sodium metal, an electron can be transferred from sodium to the alcohol O-H bond with simultaneous disproportionation (homolytic cleavage) of the O-H bond thereby generating the alkoxide anion and a hydrogen radical. The hydrogen radical (probably still on or near the metal surface) can then go on to dimerize and produce hydrogen gas.

The mechanism proposed above involves a single electron transfer (SET) from sodium. This is based on the fact that:

Searching on-line I found that water can solvate electrons just like ammonia can. The chief difference being one of stability; in ammonia solvated electrons are stable for days, whereas in water they are stable for less than 1 msec. Given the preceding mechanistic evidence and the fact that solvated electrons can exist in water, it seems reasonable to suggest that the mechanism of alkoxide formation, when sodium is reacted with an alcohol, also involves the SET mechanism.

The alcohol splits like this: $$ROH\rightarrow RO^-+H^+$$ since the pka of alcohol is around 15-17 and then a redox reaction happens: $$2Na+2H^+\rightarrow 2Na^++H_2$$ Since $H_2$ is released it is entropically favourable and drives the reaction. Better, alkoxide is represented as: $$RO^-Na^+$$

The hydrogen atoms can then dimerise.

The chemistry of solvated electrons in various media has been studied at great length by pulse radiolysis, this is an experiment similar to flash photoylsis. Instead of a flask of light to start the reaction the pulse radiolysis method normally uses a pulse of high energy electrons from a LINAC.

This article in Chemistry World sheds some light on the reaction of sodium metal with water. https://www.chemistryworld.com/news/tamed-sodium-in-water-comes-out-of-the-blue/1017231.article

25
The acidity of boric acid
11
Mozingo reduction mechanism
4
Synthesizing 2-methyl-2-butanol
7
Is metallic sodium a strong base?
12
Role of methanol in NaBH4 reduction
2
Ester as a side product in the synthesis of bromoalkane from alcohol. Is it correct?
3
The intrinsic electron-withdrawing nature of alkyl groups
7
Identification of the organic compound