Does rearrangement take place in the reaction between ethenylcyclohexane and iodine chloride?

I am stuck at the point if a non classical carbocation should be formed on the 2nd Carbon of the side chain.

One of my friend gave me the following suggestion:

I guess $\ce{ICl}$ will break in the form $\ce{I+/Cl-}$ so considering this if $\ce{I+}$ gets attached to the lower side of the chain then the carbocation formed on the 2nd element of the chain will not be a non-classical carbocation (because $\ce{I+}$ won't give a lone pair to the carbocation as it is electron deficient itself). A simple carbocation will be formed, and the rearrangement will be possible.

After rearranging it will get its most stable position on the carbon joining the ring and the chain so there the $\ce{Cl-}$ attacks and the requires molecule is formed.

I suspect this is wrong, What is the solution to this problem?

organic-chemistry reaction-mechanism c-c-addition
Share
Improve this question
edited May 29 '21 at 16:28

The closest reaction to what you have drawn that I could find on SciFinder is this:

The paper is mentioned below in the reference. In the paper, the researchers performed similar reactions of alkenes with $\ce{I-Cl}$ and in cases where there is a possibility of a rearrangement to a tertiary carbocation, the by-product similar to $\text{(C)}$ is generated (for example in case of the cyclohexane ring being replaced with iso-propyl, the percentages are $\text{(A)=55%; (B)=2%; (C)=38%}$).

For the reactions drawn above, the researchers did not mention the A:B ratio, however, in most cases A is the major product, which is expected (Markovnikov's rule). Nevertheless, the product formed from the rearrangement is not the major one in any of the reactions.

The mechanism is not mentioned in the paper, but my guess is that it will not be much different from the usual carbocation rearrangement mechanism. Only in this case, the hydride shift will break the iodonium ring, while creating a tertiary carbocation. The Cl can then attack the carbocation and form the product.

This is my proposed mechanism: 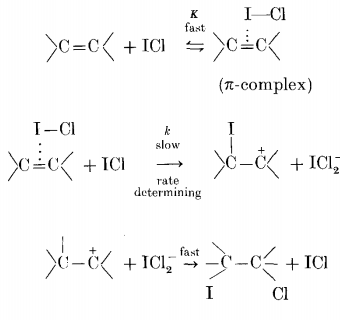 Another proof that rearrangement does in fact take place in case of $\ce{ICl}$ addition comes in the following review of $\ce{ICl}$, Encyclopedia of Reagents for Organic Synthesis 2013, 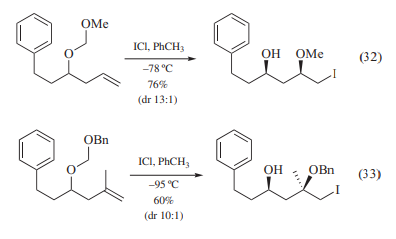 Methoxymethyl-protected homoallylic alcohols can be activated by ICl in toluene at low temperatures. The initial adduct is rearranged by a methoxy transfer, through a chair-like transition state, to yield a chloromethyl ether

Therefore, when it comes to $\ce{ICl}$ addition to alkenes, if carbocation rearrangement is possible, I would say it would be possible. Thus, the given reaction is correct.

The reaction you mentioned is indeed, as you suspect, incorrect.

Iodoniums do form but not as easily as bromoniums though. The formation of a planar carbocation in this case is unlikely. We do get iodonium like in the case of bromonium. It is to be noted that few of the haloniums ions, synthesized/discovered, are stable enough at specific conditions to remain unreacted and X-ray crystallography backs this up. In chemistry, obtaining an X-ray crystal structure of a molecule is considered to be near-definite “proof” of its existence. In fact, recently even fluoronium ions have been synthesized though they are very rare and difficult to isolate.

The point I am making is that electron deficiency of $\ce{I^+}$ is not an absolute base to knock out its formation. Firstly, $\ce{I^+}$ doesn't exist separately; haloniums are of the form $\ce{R-X^+-R}$ where X is a halogen.

In our purpose here, it only acts a reaction intermediate which exists for a very short time. The above reaction proceeds with iodonium ion formation and anti addition of the nucleophile (in this case $\ce{Cl^-}$). Chloride will add at the Markovnikov carbon. In conclusion, rearrangement not possible as no distinct planar carbocation formed.

37
What is a non-classical carbocation?
2
Interhalogen with alkene