Comparing the rates of hydrolysis of different haloalkanes

The title may not completely explain my exact doubt so I'll explain it here:

My teacher gave me the following problem during a lecture about SN1 reactions and I had to determine the order of the rate of reaction ($k$): 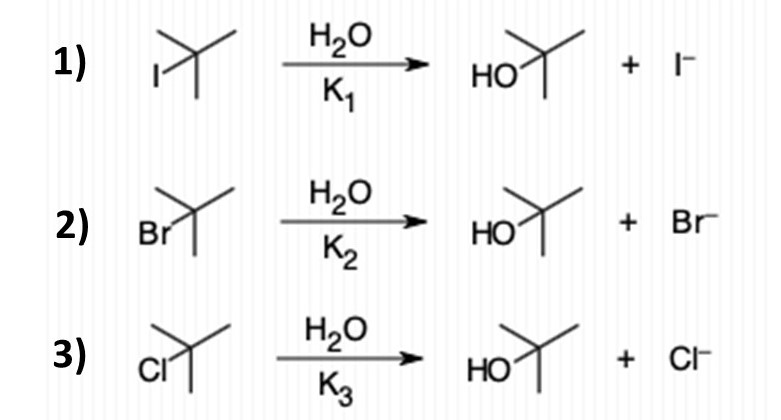 As in the rate determining step of an SN1 reaction, the halogen (leaving group) would leave to form the carbocation. I simply looked at which $\ce{C-X}$ bond would easily break and concluded that:

Which was correct as my teacher further explained. But he mentioned some more points, which I think, weren't suitable to be talked about but it still confused me.

He mentioned the solvation of the respective halide ions ($\ce{X-}$) in a polar protic solvent (here, $\ce{H2O}$):

as the iodide ion is larger in size, the water molecules don't surround and 'trap' it as much as they surround the chloride or bromide ion.

But here's where things got a bit confusing. Technically, if the chloride ion is solvated the most, it is trapped by the solvent and isn't a naked nucleophile anymore while the iodide is. So Iodide would have more tendency to attack the substrate back.

Looking at it this way, the chloride ion was seeming to be a better leaving group which it obviously isn't supposed to be.

So changing the way of looking at this is changing the conclusions as well. The former approach leads to the correct answer, which is:
$$k_1 > k_2 > k_3$$

Yet, the latter seems to indicate:

What's going on here? I would really appreciate if someone could clear out this confusion.

This confusion arise because OP did not look at the energy profile of $\mathrm{S_N}$1 mechanism. The first order kinetics of $\mathrm{S_N}$1 reactions (e.g., reactions given in the question) suggests a two-step mechanism in which the rate-determining step consists of the ionization of the substrate (here, it is an alkyl halide), as shown in the following diagram: 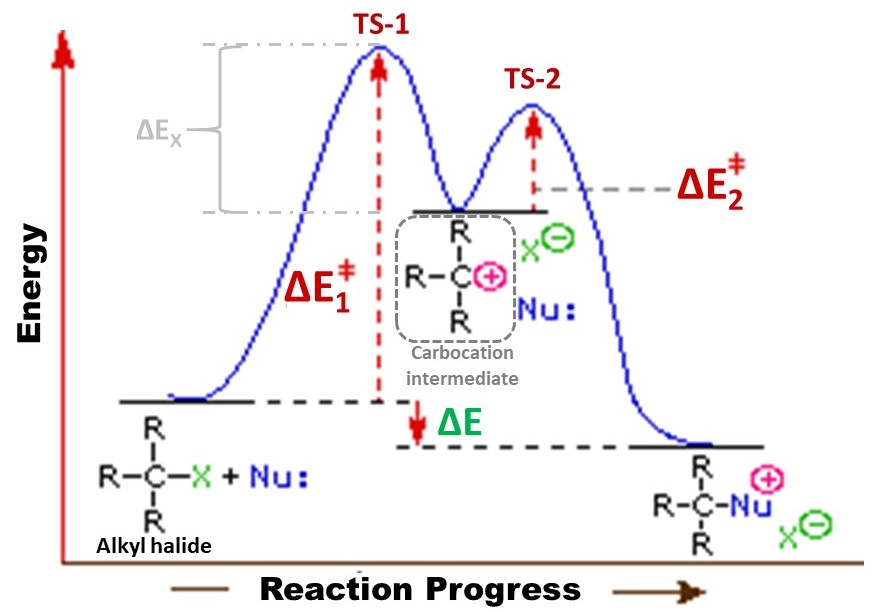 The first step, $\ce{R3C-X <=> R3C+ + X-}$, which is the ionization of alkyl halide, is the slowest and the rate determining step. It is true that this step is reversible and is in equilibrium.

However, the next step(s), $\ce{R3C+ + H2O <=> R3C-O+H2 -> R3C-OH + H+}$, is fast and gives the intended product(s). As shown in the energy profile of this mechanism, a carbocation is formed as a high-energy intermediate in first step, and this intermediate bonds immediately to nearby nucleophiles (either $\ce{X-}$ or $\ce{H2O}$ in this case). The rate of this latter reactions would be depends on the values of $\mathrm{\Delta E_\ce{X}}$ (reversible reaction of first step) and $\mathrm{\Delta E_\ce{2}}$ (the second step, $\ce{R3C+ + H2O <=> R3C-O+H2}$), respectively. The value of $\mathrm{\Delta E_\ce{X}}$ may depend on how fast $\ce{X-}$ could take away from the electrophile, meaning the rate of solvation of the respective halide ions come to play here. However, since this is an example of hydrolysis reaction, protic solvent molecules are much more around the electrophile than halide ions, and this competitive reverse reaction is minimal. It is also worth noting that final step, $\ce{R3C-O+H2 ->[X-] R3C-OH + HX}$ is irreversible (not shown in the profile) and would have gone towards to give products eventually.

Therefore, the rate is only depend on the first step. Such reactions would be considered unimolecular and would follow a first-order kinetics. That is the reason to call it $\mathrm{S_N}$1 reactions and having undergo with relevant mechanism. The first step depends on the leaving group ability of the halide. As you learn in the subject, the leaving group ability increase in halogens when going down in the periodic table: $\ce{I- \gt Br- \gt Cl- \gt F-}$ similar to $\ce{C-X}$ bond dissociation energy. Thus, rate of hydrolysis of alkyl halides are:

One way to interpret the solvent effect in this particular problem is that, as you mentioned, the iodide could attack the carbocation if it weren't trapped as much as the other halides were. But, that doesn't necessarily occur because the step-2 of $\mathrm{S_N}$1 mechanism is the fast step where the $\ce{H2O}$/ any other nucleophile attacks the carbocation immediately. Hence, the second solution that you arrived at: $K_3 \gt K_2 \gt K_1$, stands invalid.

But, it is to be remembered that the action of polar protic solvents, does increase nucleophilicity as we go down the periodic table, which doesn't happen otherwise.

Also, though the trapping of iodide is less compared to the other halides, it still remains 'trapped' for it to attack the carbocation back.

The rate law for the SN1 reaction is rate = k[substrate] as the rate-limiting step is formation of the intermediate carbocation.

In terms of leaving group ability, I- > Br- > Cl-. This is due to the polarizability of the leaving group and the ability to "spread out" the negative charge over a larger electrostatic area.

Intimate ion pairs may happen to a small extent but do not play a large role in determining the kinetic here; this would be more useful to explain inversion versus retention of configuration here, but with a trimethyl-substituted carbon, the point is moot.