Three Phases in TFM test instead of two

I am currently trying to perform the Total Fatty Matter (TFM) test on soap and for some reason I am getting three phases instead of two.

The surfactant used is SLES and other reagents include hot water, HCl, petroleum ether.

I have no idea as to what could be causing the 3 phases and my knowledge in organic chemistry is very little. Any help would be greatly appreciated. Below is the procedure:

I dissolve soap in hot water and then I transfer the cooled solution to a decantation flask. I add concentrated HCl (37% stock solution) and then petroleum ether to increase extraction ratio.

I repeat this extraction two more times (and after this I am getting 3 phases) and then I purify the organic phase twice using hot water to eliminate any HCl.

I then heat the organic phase to vaporize ether and calculate TFM %.

The surfactant used in the soap is sodium laureth sulfate (SLES), and I think that it may relate to why I have 3 phases but I can't tell why. What is the reason for this?

Soap is a fatty acid salt of an alkali metal, typically sodium or potassium. The fatty acid itself is always insoluble in water, and therefore acidification of the soap solution produces two layers, a lower aqueous layer with the alkali salt of the acid and an upper layer of fatty acid laced with aqueous material. This can be treated with an organic solvent to dissolve the fatty acid and expel the aqueous material, giving two immiscible layers.

I suspect that your soap is a combination of fatty acid soap plus SLES.

Sodium laureth sulfate is not a soap, it is a surfactant, and it is so constructed so as to be more soluble in water than sodium laurate (which is a soap) or sodium lauryl sulfonate (which is a surfactant) by addition of typically 3 -OCH$_2$CH$_2$O- (ethylene glycol) groups. This complicates the precipitation and extraction; another variable is the solvent: while petroleum ether is organic, it has poor solvent power, and long chain acids are not well dissolved. That's why you have to do the extraction many times.

I visualize your experiment to go this way: 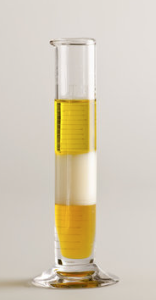 So instead of dealing with a soluble/insoluble situation, you have a significant but incomplete precipitation of HLES, and what doesn't precipitate out manages to emulsify with some of the pet ether and create the third phase.

A possible way to improve your separation is to add NaCl to the mixture after adding the HCl to maximize the salting-out effect. Another adjustment is to minimize excess acid (add just enough acid to precipitate the HLES - measure pH with paper) or add NaOH to adjust pH to near neutral (pH 6-8), when you get the third phase. This minimizes acid solubilization of the HLES, but keep the aqueous layer saturated with NaCl by adding solid NaCl if necessary.

You could also substitute toluene for the pet ether, but there is somewhat more hazard. Diethyl ether would be the extractant of choice many years ago, but alas, we must emphasize safety.

25
What can I do if I don't get a phase separation between my organic and water phases?
3
How to prevent losing solvent into the vacuum pump in rotovap solvent collection?
5
Role of hydrochloric acid and sodium hydroxide in isolation of citric acid from lemon juice
0
What are potential sources of low recovery in this acid-base extraction experiment?
7
How do phase transfer catalysts bring anions to organic phase?
5
The Boiling or Evaporation of Diethyl Ether
1
Function of 'organic' vs regular pipe cleaner
2
Potassium carbonate vs. Potassium hydroxide in Wood Ash