Also I have my doubts about hydride anion even being able to open an epoxide; I am told by Clayden that hydride anion never acts as a nucleophile because its 1s orbital is too small.

in acidic media, the nucleophile tends to attack the more substituted side of the epoxide due to electronic reasons

This is an $\ce{S_{N}1}$ like reaction. First we would protonate the epoxide oxygen. If we examine the case of an unsymmetrical epoxide and draw the resonance structures for this situation (see below) we would expect the secondary carbocation structure to count more towards the actual structure than the primary carbocation structure. Therefore, we would expect a nucleophile to react preferentially at the tertiary epoxide carbon, quite selectively.

in basic media, the nucleophile attacks the less substituted side of the epoxide due to steric reasons.

This would be a traditional $\ce{S_{N}2}$ reaction. Attack at the least substituted (sterically most accessible) carbon would be expected.

The hydride anion is not free, but complexed, so it has reasonable steric bulk - enough for stereoselective reactions to occur. Further, the reaction between LAH and epoxides is quite facile, no doubt accelerated by the release of steric strain in the 3-membered epoxide ring system. A traditional $\ce{S_{N}2}$ reaction takes place. In the figure below, the alcohol shown is formed in ca. 90% yield. Because of the "backside" attack nature of the $\ce{S_{N}2}$ reaction axial attack is strongly preferred in cyclic systems. 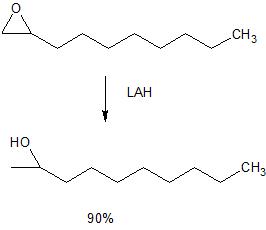 There's much detail to it beyond the scope and nit necessary but the final result is:

2
Nucleophile attack on Epoxy rings
8
Can NaH open the epoxide ring to form alcohol? If so, how?

5
How do Gilman reagents open epoxides?
10
Why is the less substituted alkene favoured in Hofmann elimination?
5
Regioselectivity of bromination of alkenes
1
Reason behind markovnikov's rule in hydration of alkenes via mercury catalysis
8
Can NaH open the epoxide ring to form alcohol? If so, how?
4
Regioselectivity in the opening of 3-membered heterocycles