How to find the angle of emission of an X-ray during impact of accelerated cathode rays?

X rays are produced when accelerated cathode rays strike a metal target or a metal anode.

How can we find the angle at which the X-ray is emitted from the metal anode or the target when the cathode ray strikes the metal perpendicular to the surface?

Does anyone know how?

physical-chemistry experimental-chemistry electrons electricity
Share
Improve this question
edited May 24 '21 at 15:19
Amzal Rozan
asked May 22 '21 at 10:39

The question lacks to specify e.g, the type of X-ray radiation (energy of exciting electrons), or the nature of the target. In parts, arguments put forward by @Amir Kalashnikov may be misunderstood as if concepts of classical optics (e.g., for a reflection target, as if the angle between the incident ray and the surface normalwould equate the angle between the surface normal and the reflected ray) like seen with visible light as e.g., with the photoelectric effect would always suffice.

The short answer: Depending on the design and mode of operation of the X-ray source, you may have X-ray radiation in all directions around the target. What does not pass the window / collimators is leakage radiation to be attenuated by shielding by the X-ray tube, or its mount to protect an operator. The spatial distribution of this radiation around the the target may be mapped by a point detector, e.g., a counter tube, directed toward the source. 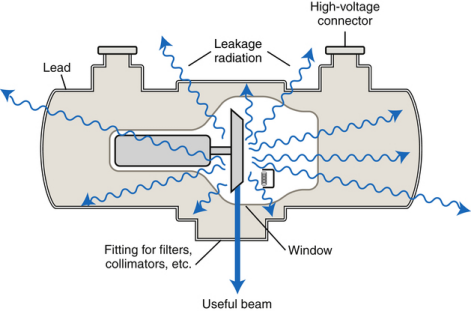 (example of an X-ray tube with rotating anode, image credit)

The longer answer: X-ray sources with a solid target typically either deploy a high electron acceleration to harvest X-ray radiation across a thin transmission target. Or, with much lesser electron acceleration, use a massive reflective / thick target. These design principles affect the spatial intensity of X-ray photons around the target.

Addressing the professionals of radiology, Kahn's The physics of Radiation Therapy outlines the physics of generation of X-rays. While the following quote focuses on bremsstrahlung, similar properties may be anticipated for the characteristic X-ray radiation, too:

"Since an electron may have one or more bremsstrahlung interactions in the material and an interaction may result in partial or complete loss of electron energy, the resulting bremsstrahlung photon may have any energy up to the initial energy of the electron. Also, the direction of emission of bremsstrahlung photons depends on the energy of the incident electrons (Fig. 3.9). At electron energies below about $\pu{100 keV}$, x-rays are emitted more or less equally in all directions. As the kinetic energy of the electrons increases, the direction of x-ray emission becomes increasingly forward. Therefore, transmission-type targets are used in megavoltage x-ray tubes (accelerators) in which the electrons bombard the target from one side and the x-ray beam is obtained on the other side. In the low-voltage x-ray tubes, it is technically advantageous to obtain the x-ray beam on the same side of the target, i.e., at 90 degrees with respect to the electron beam direction." (Kahn, p. 34)

(The emphasis was added.)

The diagram, drawn for thin transmission targets in mind, is the one below: 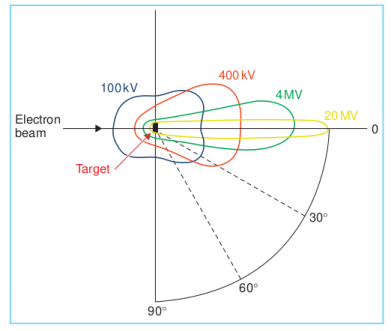 For reflection targets with a normal tilted to the incident electron beam, the heel effect may distort the angular distribution of the bremsstrahlung around the X-ray target. This is because the intensity of X-ray photons generated in deeper layers of the target may be more attenuated by this very material than the by X-ray photons generated closer to the target surface.

For the interested: Aiming for a high brilliance (i.e., high number of X-ray photons per time and beam size), both target designs are subject to modelling and simulation. This may be to identify an optimum for (electron) accelerator potential and target thickness: 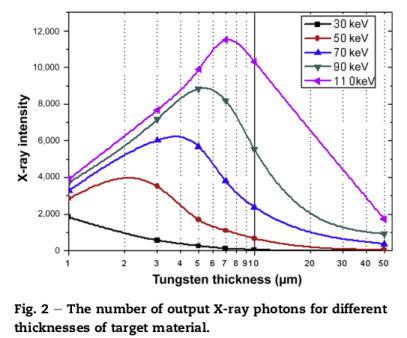 An other example -- after defining the target's design parameters -- may be about maping the space around the target: 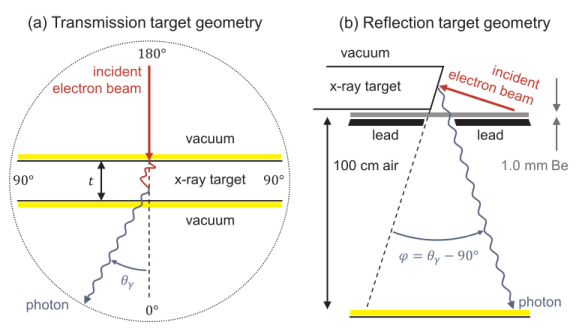 The angle of resulting X-ray radiation, product of the impact, is related to the amount of energy or momentum of the cathode ray. Bremsstrahlung relation will amount how much energy the produced photon has.

Back scatter the possible photon angles with the Compton effect equation,

A difference in kinetic energy is as difference in wavelength. Precise results should consider a vacuum and use imaginary numbers; also probability distribution on superposition.

For more details refer to the chapter 3 of Krane's Modern Physics [1].

Not the answer you're looking for? Browse other questions tagged physical-chemistry experimental-chemistry electrons electricity or ask your own question.

3
Why does the cathode ray tube only start glowing at low pressures?
9
How are cathode rays produced?
8
Smith Hieftje correction method
0
Oxidation Half Reaction Chemistry
3
Why don't all electrodes produce the same results in the electrolysis of potassium iodide?
0
Cathode ray discharge tube