Deciding locants of double bonds vs. other substituents

After having decided that the keto-group is the highest priority, this is a ketone. However, does the double bond become C2, or does the amino become C3? 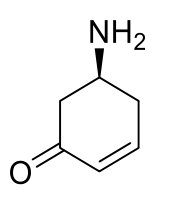 organic-chemistry nomenclature
Share
Improve this question
asked May 19 at 5:23

According to the current version of Nomenclature of Organic Chemistry – IUPAC Recommendations and Preferred Names 2013 (Blue Book) while numbering the parent chain, an unsaturation is preferred over a substitutent.

When several structural features appear in cyclic and acylic compounds, low locants are assigned to them in the following decreasing order of seniority.

.. (a) fixed numbering of a ring or ring system;
.. (b) heteroatoms in chains and in rings and ring systems;
.. (c) indicated hydrogen;
.. (d) principal characteristic groups and free valences (suffixes);
.. (e) added hydrogen;
.. (f) saturation/unsaturation (hydro/dehydro prefixes and ‘ene’ and ‘yne’ endings);
.. (g) detachable alphabetized prefixes, all considered together in a series of increasing numerical order;
.. (h) lowest locants for the substituent cited first as a prefix in the name;
..

As per the preference order the ketone will get the priority first as it is the principal characteristic group. Thus the name will end in an -one.

Now as the unsaturation is preferred over a substituent the numbering will be done in such a way that the double bond gets the lower number.

Thus the preferred IUPAC name of this molecule would be (5S)-5-aminocyclohex-2-en-1-one.