What can we say about the Gibbs free energy if it decreases or not?

[Sorry if the question looks trivial but I have thought about it for days and red a number of books all with no success.]

In almost every thermodynamics book that has something to say about chemical reactions there is a proof for the fact that at constant pressure and temperature the process is spontaneous in the direction in which the Gibbs free energy decreases. In some of the books it is also remarked that this conclusion is for when there is no "additional work" (beside the work of pressure in expanding the system), if there is an additional work then except for $dG=0$ the reversible process will yield into that additional work gaining its maximum value:

In this regard I have a question: When we have some additional works there in the problem (like electric work in an electrochemical cell), so that the second inequality holds and the maximum work is assigned to $dG$ as $dG=\delta W_{Add,Max}$, why still we feel free to use the first inequality and claim $dG$ should be negative?

In the case of electrochemical cells we have: $\delta W_{E,Max}=-n\,F\,E_{cell}\,d\zeta$ wherein $\zeta$ measure the advancement of the reaction. So we would obtain in a reversible (i.e. infinitely slow) reaction $\Delta_rG=\frac{dG_{p,t}}{d\zeta}=-n\,F\,E_{cell}$. But all the books then state that since the reaction is spontaneous in the direction in which $\Delta_rG\le 0$ so we would obtain $E_{cell}\ge 0$, while we know the inequality $\Delta_rG\le0$ is obtained from $dG\le0$ which doesn't hold here.

I think the confusion may be because you are conflating two ideas about Gibbs free energy.

The first is that Gibbs energy is a thermodynamic potential - this means that on a given surface in phase-space (the NPT surface), it is the "driving" force for, well, everything. Including chemical reactions.

The second idea is that the net change in Gibbs energy when going from reactants to products indicates the direction that the reaction will (eventually) go, and that its magnitude tells you the maximum amount of work that could be done by that reaction.

Imagine a hill representing the thermodynamic potential (in this case Gibbs energy): 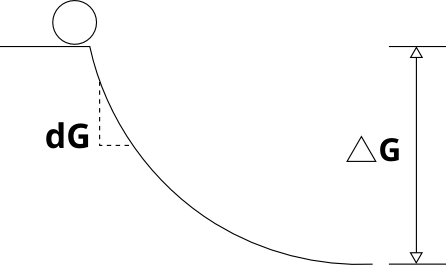 When you ask about $dG$ being negative, you are asking about the differential change - in other words, what is the slope? Obviously, if the reaction proceeds, the slope must be negative - "things roll downhill"

For your problem, the reaction involves moving an electron against a potential - the cell potential. The reaction can provide $\Delta G$ amount of energy with which to move that electron.

Not the answer you're looking for? Browse other questions tagged thermodynamics electrochemistry or ask your own question.

5
Express the maximum work from a voltaic cell
2
how is the relation between Gibbs free energy and cell potential?
2
On Spontaneity of the Redox Reactions
5
The spontaneity of a redox reaction
6
Gibbs Free Energy : What is it trying to say actually?
8
What is the precise definition of maximum work in the context of electrochemistry and thermodynamics?
2
Understanding Gibbs free energy
4
How come ∆G ≤ 0 is used for spontaneity in electrochemistry, not ∆G ≤ W(other)?
3
What is non PV work? How is it related to Gibbs energy?
0
Enthalpy of Reaction and Efficiency of Electrochemical Energy Devices