The given correct answer is (A). According to me there would be 2 enantiomeric pairs. 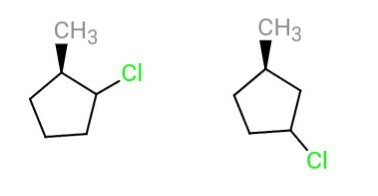 My doubt is that it does not react with NBS but it does react with Cl/hv though both have the same initiation step.

My guess is that this may be because Br is present in very small amount i.e. as an impurity so this may have something to do with it.

Initially, I wasn't going to give an answer to this question but suggested the choice A is the correct answer in my comment. However, since Random Quark hasn't give a satisfactory answer (yet I appreciate the explanation), it prompt me to give my thoughts as an answer.

As I pointed out in my comment to the question, the reaction given by OP is an example of Mozingo Reduction:

Thus, the final product is methylcyclopentane, which does not contain any acidic hydrogen because there are no carbonyl or double bond on the structure. Also, although the starting compound, (2S)-2-methylcyclopentanone is an optically active compound, it would loose its chirality due to reduction (gaining plane of symmetry).

Hence, the only incorrect statement is A and consequently, it is the correct choice as given.

Firstly, about (A), you are correct that two enantiomeric pairs are formed. You have misread the question, it says the INCORRECT option.

Then coming to why Cl2/hv reacts but NBS doesn't give its usual bromine substitution. As you already know, these reactions are free radical reactions that need a free radical initiator like light, peroxide, heat, etc. Cl2/hv has the presence of sunlight that is able to do the homolytic cleavage of the Cl-Cl bond.

The initiation step in allylic and benzylic bromination with NBS is the formation of a bromine atom by homolytic cleavage of the N-Br bond in NBS itself.

Wondering where the Br2 came from? The image doesn't show that but HBr formed reacts with NBS to give N-Bromosuccinamide and Br2.

The unique role of NBS is to maintain the very low concentration of bromine by reacting with HBr.The low solubility of NBS in CCl4 (<0.005 M) is important for bromination in NBS. Different solvents can show different reactions while it may be so that NBS all alone doesn't give any reaction until we have a free radical initiator. Hence, CCl4 must be used as the solvent in allylic or benzylic bromination (I mean not necessarily allylic and benzylic only) with NBS. During the reaction, the insoluble NBS, which is denser than CCl4, disappears from the bottom of the flask, and the less dense by-product, succinimide forms a layer on the surface of the CCl4. Possibly the further reactions occur at this surface (who knows!).

TL;DR NBS all alone won't give any reaction here. The presence of a suitable solvent is the key to its bromination.

This is Mozingo's Reduction, and product formed would be methylcyclopentane. The reason $\ce{Cl}$ free radical reacts with this compound, but NBS doesn't is because $\ce{Br}$ free radical is formed in low concentration in NBS, so it only reacts to form stable free radical, namely, allylic and benzylic free radicals only. Also, you are right, $2$ enantiomeric pairs would be formed, the question is asking for $\mathbf {incorrect}$ statements.

1
Free Radical Reaction of Methane and Chlorine
11
Does an acetal give a positive Tollens test?
9
What is the relationship between the two definitions of the difference between basicity and nucleophilicity?
7
Why does the light catalyzed radical addition of tetrachloromethane to an alkene produce only a single regioisomer?
1
Which of these functional groups is soluble in aqueous HCl and/or NaOH?
1
How do quaternary ammonium salts catalyse SN2 reactions?
0
Compare the boiling points of isobutane and 1-butyne
0
Effect of isotopes on H-Bonding