I came across a synthesis of centrohexaindane that has the following steps:

This is a Diels–Alder reaction that gives an aromatic ring. I know that alkynes will give this reaction as follows:

The sulfone is the only possible oxidizing agent here (toluene solvent doesn't seem like it would oxidize) and Wikipedia says on its page on sulfones that:

Sulfone is a relatively inert functional group, being weakly basic(compared to sulfoxides). They are non-oxidizing.

A few references into the rabbit hole and we have an answer. The major reference was given in the link mentioned by OP which was Chem. Ber. 1994, 127 (2), 409–425[1], in which the reaction mechanism of the synthesis is given as follows: 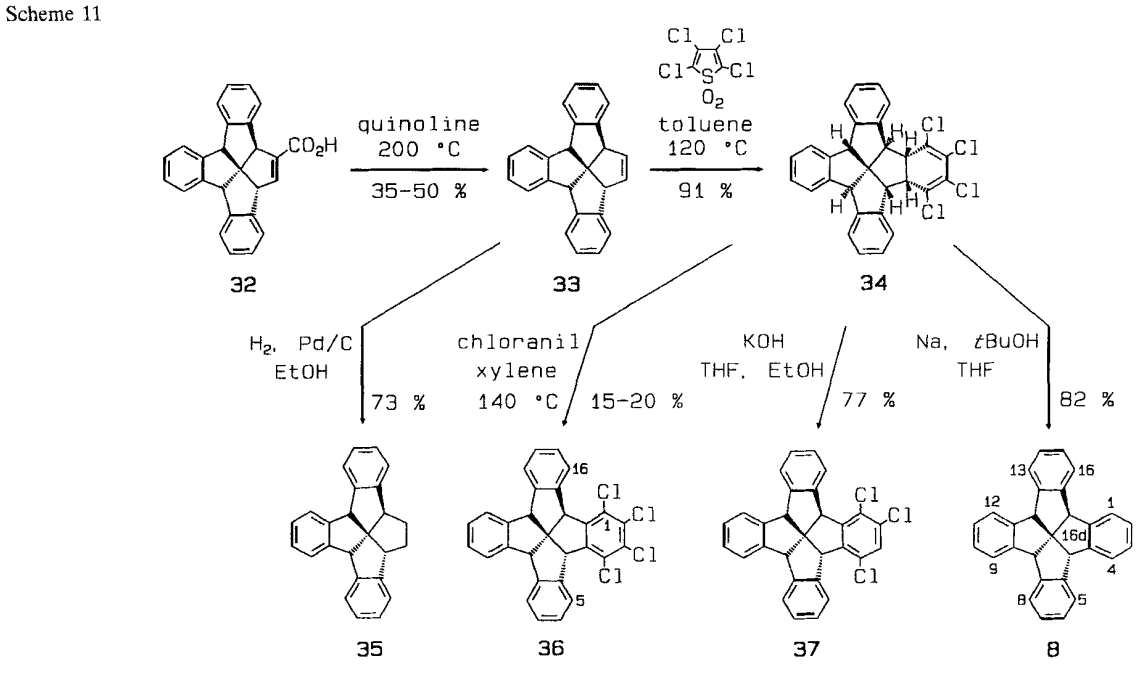 [...] Reaction of 33 with tetrathiophene-S,S-dioxide is performed by heating the reactants in highly concentrated toluene solution to $\pu{120 °C}$ for a total of 24 h. The cycloadduct 34 is obtained in high yield.

Now the question that has arisen in the step from 33 to 34 is the following, under normal conditions of Diels-Alder, there would only be one double bond in the final product. Here there are two. This can be answered going one down into the rabbit hole and using J. Org. Chem. 1980, 45 (5), 856–867.[2]

This paper deals with the specific reaction that causes confusion - the annulation using tetrachlorothiophene 1,1-dioxide. According to this paper:

The compound has a combination of stability and reactivity that makes it a useful synthetic reagent. It undergoes Diels-Alder addition with double bonds to form an adduct which spontaneously loses sulfur dioxide to leave the double bond annelated with a tetrachlorobutadienediyl group.

Furthermore, it talks about the reactivity to olefinic bonds and states the following:

Example 18, from l-hexen-5-yne, reveals the greater reactivity of alkene vs. alkyne. Reaction is exclusively with the alkene bond as far as NMR reveals. Thus, the kinetically favored product is formed rather than the thermodynamically favored one.

Not the answer you're looking for? Browse other questions tagged organic-chemistry reaction-mechanism synthesis erratum or ask your own question.

17
Why does the sulfone ring in tazobactam open when the lactam is hydrolyzed?
2
Diels Alder reaction with maleic anhydride. Reactivity of different dienes
4
Simple experiments involving enantiomer synthesis
15
How accurate is this polar mechanism for the Diels-Alder reaction?
2
Mechanism of Diels-Alder reaction
1
Why does two phenylhydrazine molecule react with glucose in osazone formation?
1
Dependence of primary alcohol oxidation on presence of water and "strong" or "weak" oxidants
7
Retro Diels–Alder reaction in synthesis of corallopyronin A