I was solving a bunch of reactions when I encountered the following:

So for the first question: 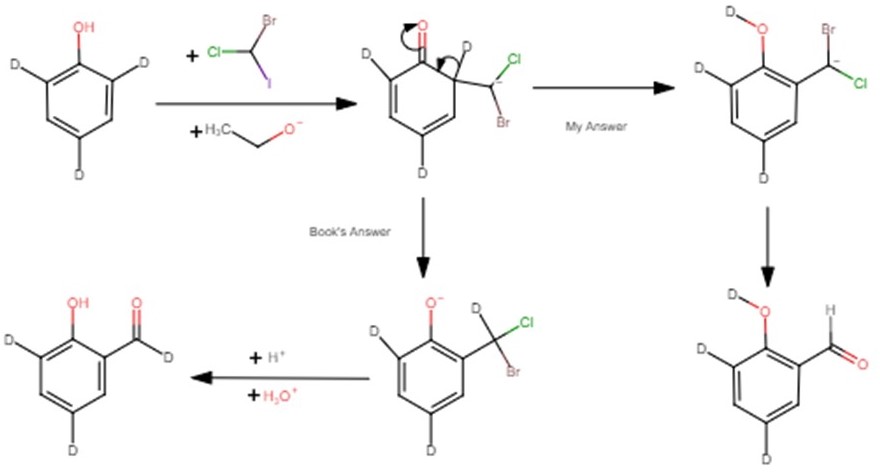 This is a Reimer-Tiemann reaction. I felt that the tautomerism would result in the deuterium getting attached to the phenolic $\ce{O^-}$. As it turns out, that was wrong. Oh well. Then I proceeded with the second question. Now this one is a Kolbe-Schmidt reaction, where the $\ce{CO2}$ liberated will react with the phenol. Going by the previous reaction, this time I decided not to add the $\ce{D}$ atom to the phenolic $\ce{O-}$. Consequently, this is how it panned out: 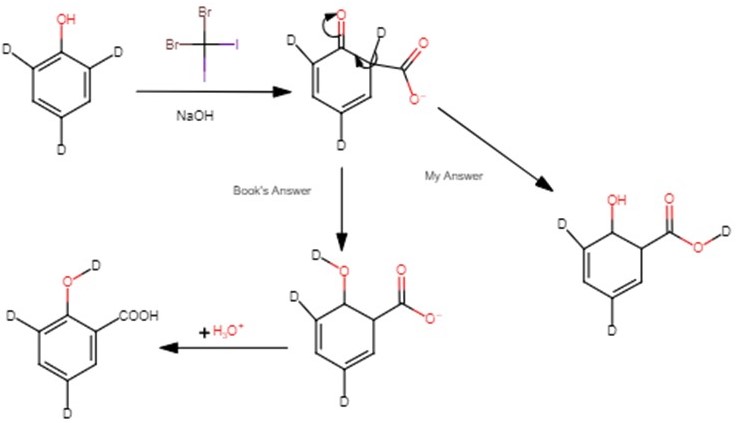 All of this has left me quite confused. So here's my question:

Why is it that the $\ce{D}$ atom during tautomerism adds on to the phenolic $\ce{O-}$ in the Kolbe-Schmidt reaction, but does not proceed to do so in the Reimer-Tiemann reaction?

I appreciate Waylander's answer. However, although the answer gives you the basic mechanisms for Reimer–Tiemann and Kolbe-Schmidt reactions, it does not address some question and OP's misconceptions such as:

The $\ce{CO2}$ liberated will react with the phenol.

Thus, I'd like to address these by using the same starting materials used in the question. Following is the step-by step mechanism of the first reaction: 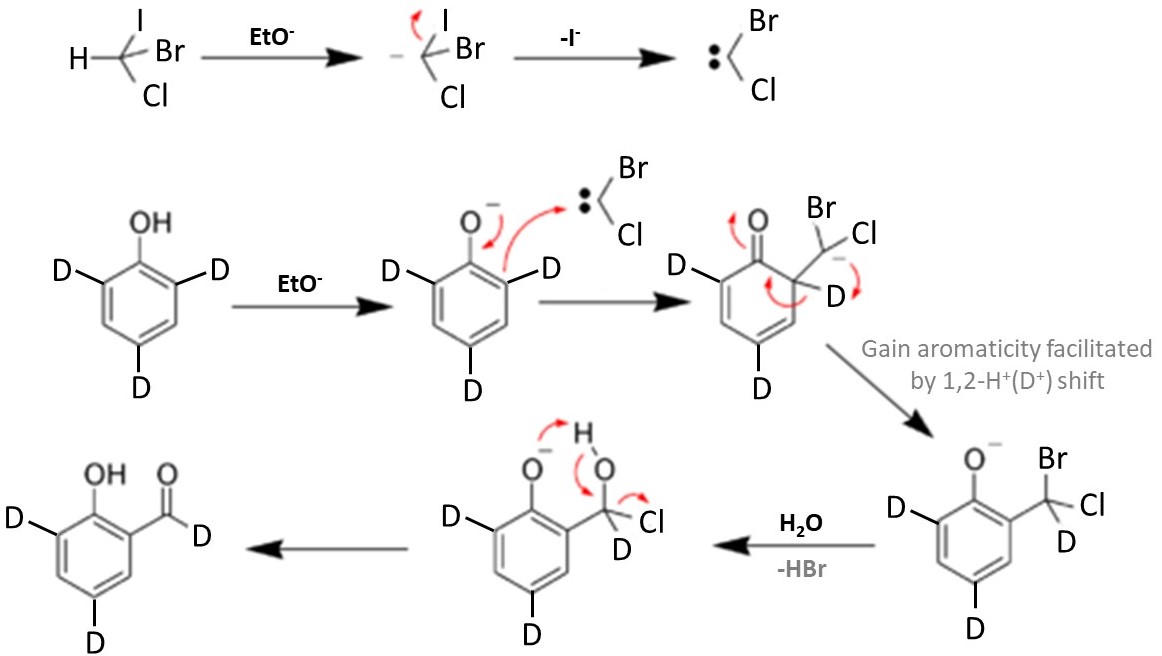 The ethoxide ion is a strong base, strong enough to abstract acidic hydrogen from the starting phenol and bromochloroiodomethane $(\ce{CHBrICl})$. After the proton abstraction, the iodide ion then leave from the resulting carbanion to generate relatively stable bromochlorocarbene $(\ce{BrClC\!:})$ in situ. This carbene is the active nucleophile that reacts with the phenoxide anion (generated by another ethoxide ion) to give an anionic intermediate with the negative charge transformed to the halogenated carbon (second step of the mechanism). Technically, this intermediate is the keto-form of the corresponding phenol. Thus, next step, the tautomerism to the enol-form to gain aromaticity, is thermodynamically driven, but a critical one, because the deuterium ion $(\ce{D+})$ can now transfer to two centers, either dihalo-carbanion or phenolic oxygen. Since phenoxide ion is more stable than the carbanion (negative charge is more comfortable with higher electronegative atom), 1,2-$\ce{D+}$ shift happens to give thermodynamically more stable phenoxide intermediate with deuterium on the dihalocarbon (bromochlorodeuteromethyl). The bromine of this intermediate is then replaced by a water molecule followed by a subsequent rearrangement to eliminate remaining chlorine to give the intended deuterated 2-hydroxybenzaldehyde product. Thus, deuterium is not lost but transformed during this reaction.

Now, let's look at Kolbe-Schmidt reaction with given starting materials. Following is the step-by step mechanism of the reaction:

The hydroxide ion is also a strong base, strong enough to abstract acidic hydrogen from a phenol or a starting material such as chloroform $(\ce{CHCl3})$. However, our starting material, dibromodiiodomethane $(\ce{CBr2I2})$ has no acidic hydrogen, but it can act as an excellent electrophile. Thus, the phenoxide anion (generated by reacting with hydroxide ion) reacts with $\ce{CBr2I2}$ replacing one iodide ion to give a neutral trihalo-intermediate (second step of the mechanism). Again, technically, this intermediate is the keto-form of the corresponding phenol. The next step, tautomerism to the enol-form to gain aromaticity is again, thermodynamically driven. However, the deuterium ion $(\ce{D+})$ does not transfer to the phenolic oxygen, because the reaction is still in basic medium. Instead, the $\ce{D+}$ would be abstracted by an another hydroxide ion to give the corresponding phenoxide as shown in the mechanism.

The Iodine of this intermediate is then replaced by a water molecule followed by the subsequent rearrangement to eliminate one of bromines to give the corresponding acid bromide, which subsequently hydrolyzed to give the corresponding benzoic acid. Thus, deuterium is lost during the transformation of this reaction. Also, keep in mind that $\ce{CO2}$ is not liberated to react with the starting phenoxide ion, but $\ce{COO-}$ is generated as a consequence of hydrolysis after the electrophilic substitution of $\ce{CBr2I2}$ to the phenol. 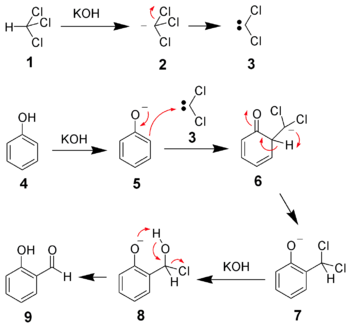 The polyhaloform reacts with strong base to create a carbene, a highly reactive species which reacts with the phenoxide anion through the alpha carbon to give an anionic intermediate with the -ve charge on the halogenated carbon. It is this species that picks up the deuterium.

In Kolbe-Schmidt reaction, the process does not proceed through a carbene. It is nucleophilic attack (through carbon) of the phenoxide on the polyhaloform (or carbon dioxide) and the deuterium shifts to the phenol oxygen as the product re-establishes aromaticity. Mechanism from Wikipedia here

Not the answer you're looking for? Browse other questions tagged organic-chemistry reaction-mechanism carbonyl-compounds phenols or ask your own question.