How do atomic orbitals interfere both constructively AND destructively to give two molecular orbitals?

I am an organic chemistry student learning how atomic orbitals interfere to give rise to molecular obitals. The image below suggests that each of the hydrogens' atomic orbitals interfere both constructively AND destructively. How is this possible? More fundamentally, how does the 1s atomic orbital of a hydrogen atom have both positive and negative phase in the first place? I realize that there is a similar question on this topic but I wasn't able to understand the answer to that post due to my limited background in quantum mechanics and was hence was looking for someone who could explain in simple terms. 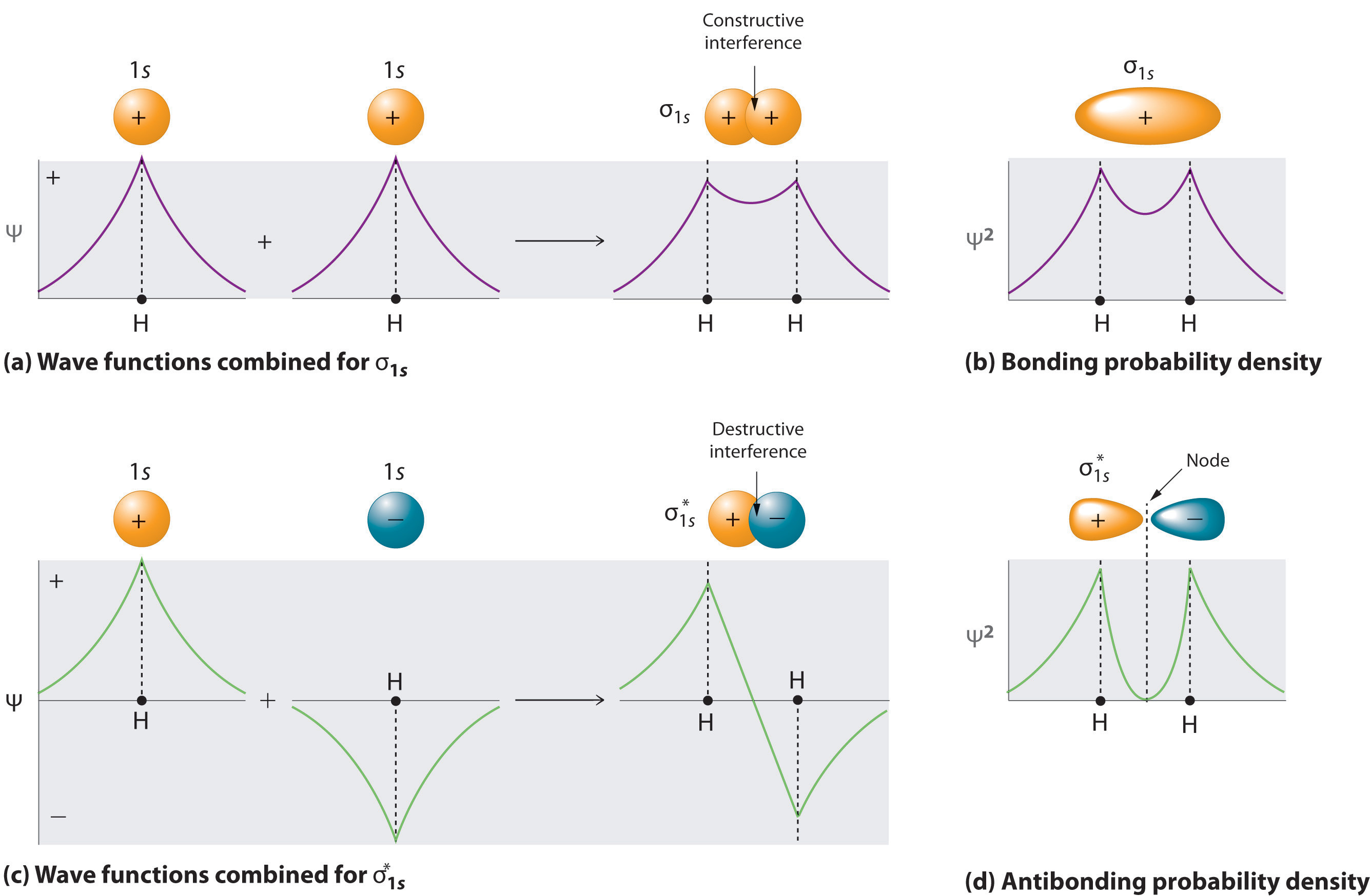 What does MO formation entail?

A very common misconception is that the formation of MOs involve addition, or subtraction, of two physical objects. And the confusion arises because, how can the same physical object have two different phases when added or subtracted? However, this is not an accurate picture. MO construction is not a physical process which occurs between two real objects which each possess a definite phase. There are at least two reasons for this:

So, what does it really entail? I think a better description is that orbitals are possibilities for where the electrons can go. Let's say you have a hydrogen atom with one electron. This electron can either be in a 1s orbital, or (if you excite the electron) it can be in a 2s orbital, or a 2p orbital, etc. etc. So, the electron has many different options as to where it can go. Of course, in ground-state hydrogen, the eventual choice is the 1s orbital.

In this regard, the orbitals are not objects or boxes to be inhabited by the electron, but they represent a set of choices. If we adopt this mindset, then it already becomes clearer how both bonding and antibonding orbitals form: these are simply the two "possibilities" which can happen. It is not a question of how can they both be true at the same time, because that isn't the point: the point is that MOs themselves are different possibilities for an electron to adopt, and it isn't necessary that both of them be true at the same time. Indeed, they can't be, because an electron can't simultaneously inhabit two MOs.

I hesitated to include this analogy in the original answer, but will include it now, since it may prove helpful to some. There are some problems with it, however, so don't take it as a literal description, but rather a conceptual one.

Consider, then, that you're standing on a hill overlooking a two-lane motorway which runs north to south. However, you don't have a compass on hand, so you don't actually know which way is north or south. (This is analogous to not knowing the actual phase of an orbital $k$: you can't tell whether it's $+1$ or $-1$, for example.)

Suppose you see two cars driving along the motorway, one on each lane. If you focus on one car at a time, what information can you give about each of the two cars? You can't tell which way they're headed, because you don't know north from south. However, you can tell which lane they are driving on: for example, because one lane is closer to you than the other. So you can furnish two pieces of information:

This situation is exactly analogous to having two hydrogen atoms, with one electron in each 1s orbital. In other words, this corresponds to the "pre-MO" description of the $\ce{H2}$ system:

Now, let's return to the cars. You might think that there actually is another way we can describe their movement, and that is based on not just zooming onto one of them at a time, but rather by comparing their relative motion. So, again we have two possibilities:

This is precisely analogous to the MO description of $\ce{H2}$:

Note that we didn't somehow physically stick the two cars together, or force them to travel in any particular direction. What we have added together are not cars, but rather possibilities: we combined the two "base" descriptions, of one car moving along each lane, into two "possibilities" where they are either going in the same or opposite direction. At any given point in time, whenever you see two cars going along the motorway, either of these possibilities can be realised.

The same is true of MOs. The MOs don't represent physical addition of two orbitals, but rather different possibilities of how these orbitals can combine: they can either combine constructively, or destructively. For any given electron, either of these possibilities can be realised, too: and unlike the motorway, it's not mutually exclusive, because one (or two) electron(s) can be in the bonding orbital and another can be in the antibonding orbital.

This is a more formal description of how MOs are constructed, and much closer to the truth. There are very few, and possibly no, quick and dirty ways to explain MO theory, in my opinion. However, if you have studied linear algebra before,* then the transition from AOs and MOs is the same as a change of basis. A basis refers to a minimal set of vectors, from which any arbitrary vector may be constructed through linear combination. If you have a vector $(a, b)$, you can express this as: $$\begin{pmatrix}a\\b\end{pmatrix} = a\begin{pmatrix}1\\0\end{pmatrix} + b\begin{pmatrix}0\\1\end{pmatrix}.$$

From this point of view, AOs and MOs are simply different bases.‡ The existence of both the bonding and antibonding MO is not only logical, but also mandatory in order to form a complete basis.

The familiar AOs that you have studied (1s, 2s, 2p, ...) are simply a series of basis states for the hydrogen atom. In the $\ce{H2}$ molecule, there are two sets of basis states, one for each atom. The transition from "2 sets of AOs" to "1 set of MOs" is just a change of basis: we go from two sets of atomic bases to one single molecular basis.

* The analogy I use above is slightly simplified, and might look slightly contrived, but the link between QM and linear algebra is actually very deep. QM is somewhat analogous to linear algebra but on an infinite-dimensional vector space (technically, a Hilbert space).

‡ "Bases" being the plural of "basis".

Unfortunately, in quantum mechanics there is rarely an explanation "in simple terms." Quantum mechanics is a mathematical construct that so far seems to predict the results of all experiments that have been done to test it, but explaining those maths in terms of anything we have learned from the larger-than-quantum scale "classical" systems has so far eluded us. In fact, attempting to understand QM by applying intuition from classical physics generally causes more confusion, as seems to be the case here.

It seems that you are considering the two H-atom 1s orbitals to be static standing wave systems that can only combine constructively or destructively, which would be the case if these were classical standing waves. But they aren't. They're quantum mechanical systems that live by different rules. When the two atoms come together, the whole system is changed, and the wave function describing the new system is not just an overlay of the previously separated "waves". Conceptually, it may be helpful to think of the new system as formed by constructive and destructive interference, but only in the vaguest conceptual sense. Pushing that metaphor too far gets you into the confusion you are in now.

As unsatisfying as it will be, it might be best at this point to accept that the conceptual description is qualitatively consistent with the mathematics and so is a guide to intuitively constructing molecular orbitals from atomic orbitals, but it isn't an explanation of why?. If you continue farther in your study of quantum chemistry, you'll learn how to construct these molecular orbitals more quantitatively, and you'll get better answers of how the math works to give certain answers, but you'll never get a good answer of why.

Now you have to use and combine the other half of these wave functions, without adding them. The only thing to do is to subtract them. But such a subtraction produces a point between the two nuclei where the obtained wave function is equal to zero. As a consequence, this molecular orbital is a antibonding orbital. And the integral of this antibonding orbital is also equal to $1$.

Hopefully the pure theorists will pardon me for having simplified the description of the problem. I should have spoken of the factor √2/2 instead of $1/2$. I should have said that it is the square of the wavefunction that should have been integrated. I have tried to be understandable to a beginning student

1
How can 2 molecular orbitals form simultaneously?
0
Does the 1s orbital have two different phases?
1
What does it mean for an electron to be in a bonding/antibonding orbital?

14
Is s-p mixing referring to hybridization or is it the mixing of one atoms s orbital with the other's p orbital?
5
How is a molecular orbital a 'quantum superposition' of the atomic orbitals?
4
Molecular orbital theory and the conservation of molecular orbitals
3
Phases of Atomic or Molecular Orbitals