Electron repulsion is quite clear. Filled (molecular) orbitals repulse each other. I have no clue however what is meant with steric interaction, my textbook makes a small remark about it saying it is a repulsive force when atoms come to close to each other. It notes that in the conformation of ethane this hardly plays a role because the hydrogen atoms are to small to interact. But isn't this the same as electron repulsion? What else makes (neutral) atoms want to avoid each other?

Then the last part of bonding and anti bonding orbital interaction (overlap) stabilizing the staggered conformation of ethane is also not so clear to me. How does partially putting electrons in a higher energy molecular orbital (anti bonding) make a molecule's conformation lower in energy?

what is meant with steric interaction

isn't this the same as electron repulsion?

I agree with you Jori, the basis of steric interactions is electron repulsion. When anyone stops to think about "why are adjacent bulky groups destabilizing" they'll soon arrive at the destabilizing interpenetration of electron clouds. However, the use of the term "steric" to denote interactions due to size and bulk has been around so long that it has simply become common usage - the way things are said. The following figure shows trans-1,2-di-t-butylethylene to be more stable than its cis counterpart. It's easier to say and understand that the bulky t-butyl groups produce steric strain in the cis isomer, rather than to say electronic clouds interpenetrate in the cis isomer. The word "steric" immediately creates a picture of sorts in a chemist's mind. Tetra-t-butylethylene has yet to be synthesized; attributing this to steric bulk around the double bond provides a clear image of the problem.

Then the last part of bonding and anti bonding orbital interaction (overlap) stabilizing the staggered conformation of ethane is also not so clear to me. How does partially putting electrons in a higher energy molecular orbital (anti bonding) make a molecule's conformation lower in energy?

First off, let's recognize that the orbital interaction you are referring to is a way to understand the effect of hyperconjugation in various conformations. Also, we are not putting electrons in a higher energy molecular orbital.

Here are some diagrams that may help explain this. The first diagram on the left doesn't relate to hyperconjugation, but since it is part of the picture, let's explain it. The Pauli Exclusion principle says that we can't have electrons with the same quantum numbers in the same orbital. In ethane, each pair of electrons in one C-H bond have the same quantum numbers as the pair electrons in any other C-H bond. Therefor, the closer we bring 2 C-H bonds, the closer we are to violating the Pauli Exclusion principle. This argument tells us that the eclipsed conformation should therefor, be higher in energy than the staggered conformation.

The figures in the middle and the right show the effects of hyperconjugation upon the eclipsed and staggered conformations of ethane, respectively. According to Frontier Molecular Orbital theory we examine the interaction between the highest occupied molecular orbital (HOMO) and the lowest unoccupied molecular orbital (LUMO) to see if stabilization or destabilization results. In the hyperconjugated resonance structure for ethane we have a proton and a pair of electrons in the carbon $\ce{sp^3}$ orbital, that $\ce{sp^3}$ orbital with two electrons is our HOMO. The only LUMO for it to interact with is the LUMO for the C-H (the $\sigma^{*}$ orbital) bond on the adjacent carbon atom. We can mix the $\ce{sp^3}$ and $\sigma^{*}$ orbitals to produce 2 new MOs, one bonding (no nodes between these 2 orbitals) and one antibonding (1 node between these two orbitals). What is pictured below is the bonding (in-phase, no nodes) combination of these two orbitals. We see that in the eclipsed (middle) conformation the interaction in this orbital is destabilizing, there is no constructive overlap. However, in the staggered (right) conformation the overlap within this orbital is now constructive - there is positive overlap. The hyperconjugation argument also favors the staggered conformation being at lower energy. 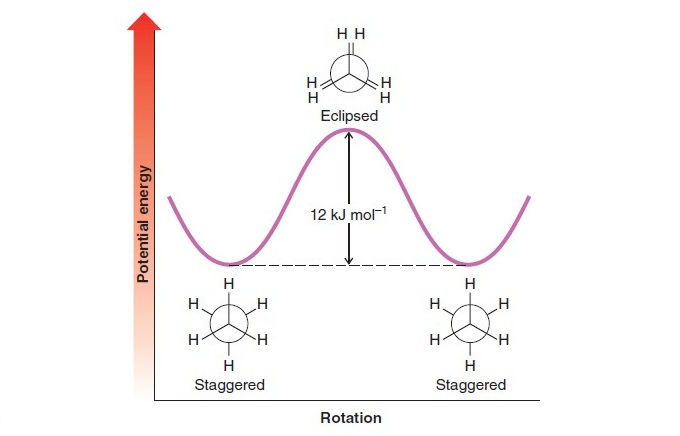 Not the answer you're looking for? Browse other questions tagged stability conformers or ask your own question.