The reaction of Alkyl Halides with sodium nitrite in DMF

How does the reaction of Alkyl Halides with sodium nitrite in DMF proceed?

I was aware of the reaction of alkyl halides with aqueous sodium nitrite which results in the formation of an alkyl nitrite but I came across the following reaction and was confused of how that would work?

DMF being the solvent here, I'm pretty sure it's safe to assume that it will be following $\mathrm{S_N2}$ path here but since I have never seen this reaction before, I'd appreciate if someone could enlighten me.

Also, looking at the reaction, I thought maybe DMF makes the sodium nitrate covalent somehow? (I know this is baseless but that's all I could think) which looks quite confusing.

I came across a post very similar to this but I think that didn't answer what's being asked. So I was hoping if someone could explain the mechanism of this (including if its $\mathrm{S_N1}$ or $\mathrm{S_N2}$)?

The $\mathrm{S_N1}$ or $\mathrm{S_N2}$ reaction of alkyl halide with nitrite ion is complicated one since nitrite is an ambident nucleophile. For instance, it was reported that silver nitrite reacts with alkyl halides to give nitrites while sodium nitrite gives more nitroalkane than alkyl nitrite (based on Hard Acid/Hard Base concept; Ref.1): $$\ce{AgNO2 + R-Br -> R-ONO + AgBr \tag1}$$ $$\ce{NaNO2 + R-Br -> R-NO2 + NaBr \tag2}$$ However, these results were contradicted by work of Kornblum who compared the reactions of iodoalkanes with $\ce{NaNO2}$ and $\ce{AgNO2}$ (Ref.2): $$\ce{C7H15CH2-I + AgNO2/NaNO3 -> C7H15CH2-NO2 + C7H15CH2-ONO + AgI \tag3}$$ It was shown by the work of Kornblum and coworkers that both primary alkyl bromides and iodides have given excellent yields of pure nitroalkanes (73-83% as major product) when $\ce{AgNO2}$ is used as the nucleophile (Ref.3). In contrast, primary chlorides are completely inert under the conditions $(\pu{0\!-\! 25 ^\circ C}/\ce{Et2O})$:

Based on the results obtained, the authors had concluded that this is a good method to prepare primary-nitroalkanes (Note that nitroalkanes, $\ce{R-NO2}$, are thermodynamically more stable than alkyl nitrites, $\ce{R-ONO}$; Ref.1). Some of the further work by Kornblum et al. have noted that use of tertiary alkyl halides to prepare corresponding nitro compounds is useless (0-5% yield) while those reactions with secondary alkyl halides have also given only less than 15% yield of expected nitroalkanes (Ref.4). After extensive work on synthesis of nitroalkanes and alkyl nitrites, declared that:

In the synthesis of saturated primary nitro compounds, silver nitrite gives nitroparaffins in about 80% yield as against about 60% yields obtained with sodium nitrite. While silver nitrite is, therefore, the reagent of choice here, the lower cost and ready availability of sodium nitrite, the not very large disparity in yield, and the shorter reaction time all combine to make sodium nitrite an excellent second choice*" (p.114, Ref.2; and Ref.5).

In their mechanistic studies, Kornblum et al. (Ref.6) have found that yield of $\ce{R-NO2}$ isomer falls progressively when substrate changes from primary to secondary to tertiary halide. In contrast, the yield of $\ce{R-ONO}$ counterpart increases with the same order of primary to secondary to tertiary. Although there is a steric effect in play, the authors conclude that the reaction proceeds via a transition state, which has both $\mathrm{S_N1}$ and $\mathrm{S_N2}$ character in proportions that vary gradually with the structure of the halide. The greater the $\mathrm{S_N1}$ character of the transition state, the greater is the preferences for covalency formation with the atom with higher electronegativity (e.g., $\ce{R-ONO}$). Conversely, the greater the $\mathrm{S_N2}$ contribution to the transition state, the greater the preferences for covalency formation to the atom with lower electronegativity (e.g., $\ce{R-NO2}$).

In this regard, I'd say the reaction, $\ce{R-X + NaNO2 ->[DMF] R-NO2 + NaX}$ would proceed differently under different conditions. Since the solvent is (assuming) anhydrous DMF, the condition is set for $\mathrm{S_N2}$ reactions. Thus, for instance:

I think that would be enough of discussion since very little information is given in the question. For example, we cannot decide whether reaction goes in ether $\mathrm{S_N1}$ or $\mathrm{S_N2}$ without knowing the nature of $\ce{R}$ group. Knowing the structure of $\ce{R}$ group is extremely important since even some specific primary halides such as neo-pentyl halide do not react under same conditions where other primary halides proceed rapidly.

Finally, it is noteworthy to mention following reaction, which play a significant role in the product ratio of $\ce{R-NO2}$ to $\ce{R-ONO}$: 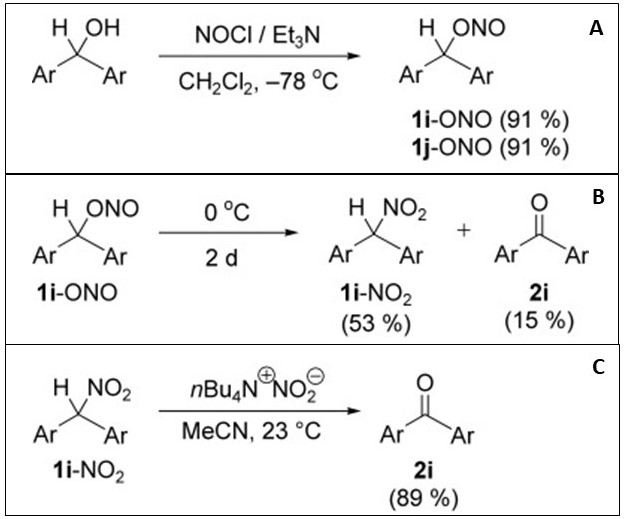 These experiments clearly suggest that preparation of nitroalkane is not simple as the reaction suggests, but rather complicated process!

3
Rate of SN2 reaction depending on following different conditions in case of primary halides
3
Deciding E1/E2/SN1/SN2 for cyanide ion
4
By which mechanism would azide react with alcohols or alkyl halides?
3
Relative reactivities of alkyl halides in an E2 reaction
6
Elimination reaction with 1,2-dibromo-4-methylcyclohexane
2
Confusion about the SN1 and SN2 Mechanism
1
SN1 reaction of alkyl halides