An initial reasoning of mine was that (Z)-stilbene were more hindered than the (E)-isomer, and thus less stable. Yet, this doesn't make sense to me.

organic-chemistry aromatic-compounds isomers
Share
Improve this question
edited May 7 '21 at 16:14

With the $\ce{C=C}$ double bond of the stilbenes as geometric reference, you may think of the phenyl rings as substitutents increasing the electron density of the former. This creates a small, locally constraint, dipole moment. Dipoles like dipoles differ from a scalar (like e.g., temperature) that they have a direction, which is why I drew little arrows in the simplified representation of either isomer in the illustration below:

In the case of (E)-stilbene, these vectors oppose each other; for symmetry reasons, they may cancel out each other as if there were no vector present. This contrasts to the case of (Z)-stilbene where the sum of the two vectors does not vanish; symbolized (the doodle is a concept, not at exact scale) by the dashed arrow: there is a non-zero molecular dipole moment.

The drawing of (Z)-stilbene's configuration however does not state (much) about the molecule's energetically preferred conformation(s). To lessen intramolecular steric hindrance of the hydrogens of the two phenyl rings, the following spatial arrangement is more likely to happen: 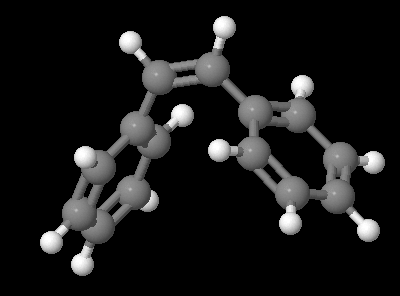 Note, regardless how the phenyl rings rotate around the bond between $\ce{C_{ar}-C_{sp^2}}$, the overall (molecular) dipole moment will not be affected from these local variations.

Equally note that to achieve an efficient recrystallization of the three constituents of your mixture, the isomers of stilbene and TPPO, you use a mixture of ethanol/water heated to reflux then allowed to cool slowly to room temperature. The addition of water is to attenuate the solution capacity of ethanol for each of the three compounds so that one preferentially crystallizes out. This is why this purification method is called fractional crystallization.

Not the answer you're looking for? Browse other questions tagged organic-chemistry aromatic-compounds isomers or ask your own question.