Where does the residue accumulate in the boiling point composition curve?

My teacher was teaching me the boiling point composition curve for fractional distillation and in the class notes he gave the following diagram (I have given below). It says that the residue starts accumulating at the point on the vaprous line just above the liquidus line (above $χ_{A},χ_{B}$). Note that $χ_{A},χ_{B}$ don't represent the coordinates, they represent the liquid composition of the two components $A$ and $B$. Similarly, $y_{A}, y_{B}$ represent the vapour composition of the vapour in equilibrium with the liquid with composition $χ_{A},χ_{B}$. But why does residue accumulate at that point? My teacher literally gave no explanation as to why. I am so confused. Please can someone explain. Please help. 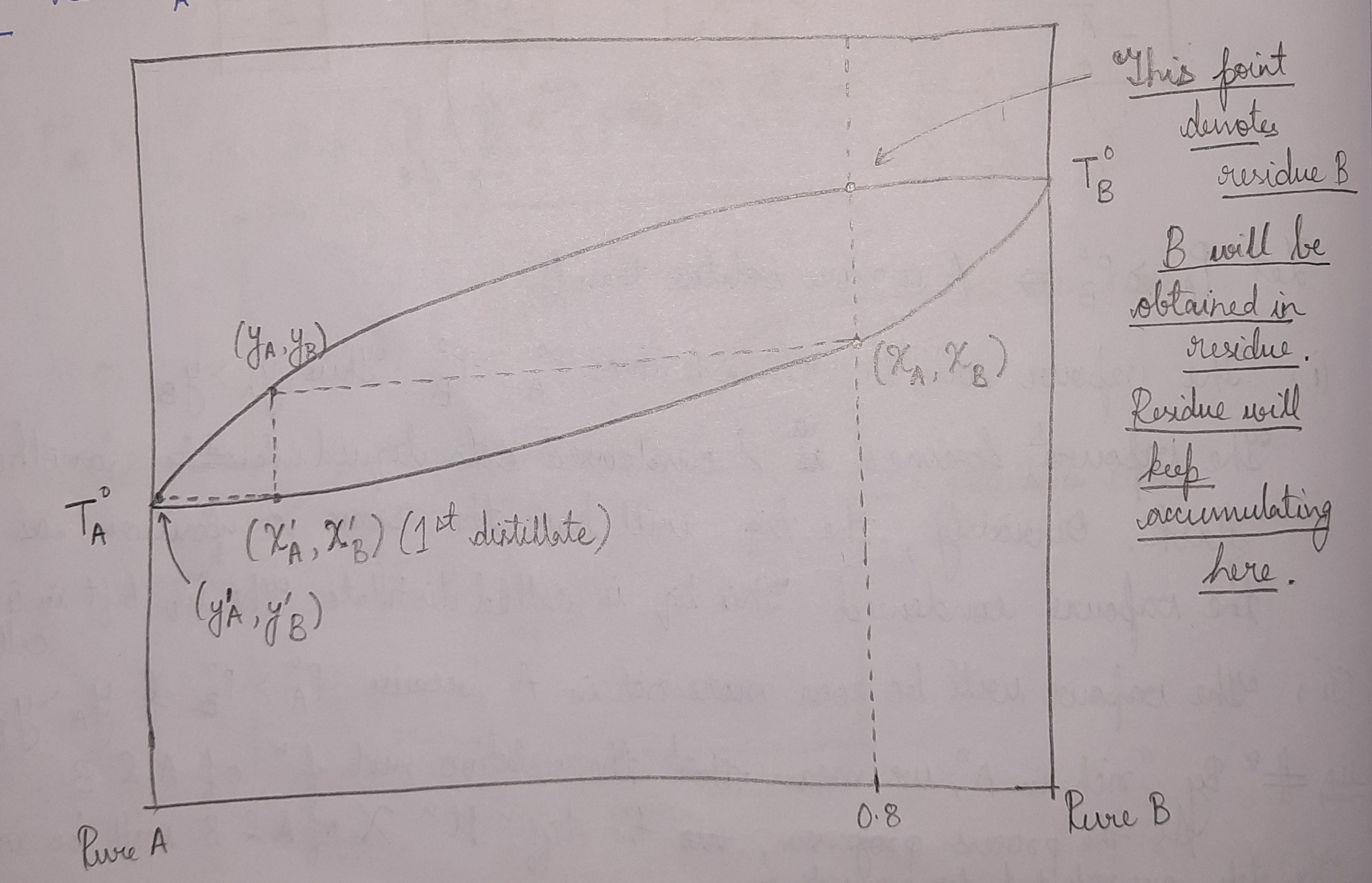 Let's start with the mixture $x_A$, which is made of 85% A + 15 % B. When heating this liquid, the first bubble vaporized appeared at a temperature just a little above $T'_A$, as given by the horizontal line. And the composition of the vapor is nearly pure $A$, with $1$% $B$. As a consequence, the liquid is loosing some $A$. its volume decreases, but as it does not loose $B$, its composition changes from $15$% $B$ to maybe $20$% $B$. As it has more B, it is necessary to heat the liquid to a higher temperature. The composition of the liquid is a point following the lower curve upwards to the right hand side of the graph. Meanwhile the composition of the vapor slightly changes and contains a little bit of $B$.

When the volume of the liquid has decreased by more than one half, the remaining liquid contains more $B$ than $A$. Its composition is $20$% $A$ and $80$% $B$. The boiling point of this mixture has increased : it is now about half way between the boiling temperatures of the pure $A$ and $B$ stuff. And the vapor gettin out of this liquid can be obtained in drawing a horizontal line from the point $0.8$ on the lower curve. This line cuts the upper line $y$ at a point $y_A$ = $85$%, and $y_B$ = $15$%. It is possible to continue heating the rest of the liquid. The amount of liquid is smaller and smaller, and the vapor has a composition following the upper $y$ curve.

Now, if you have a hot vapor containing the same proportion ($15$% B , $85$% A), and if you coli it down, the first drop of liquid happening at the beginning of the condensation has a composition corresponding the th horizontal line passing at $y_A, y_B$. So this liquid droplet contains $80$% $B$ and $20$% $A$.

2
How to determine the composition for a sucrose/ zinc nitrate solution from its freezing point?
8
Where does the Fe(III) ion go?
14
Justification for Freezing Point Depression & Boiling Point Elevation in Solutions?
1
How does the composition of a mixed solvent affect solubility?
3
Properties of azeotropes
1
Boiling point elevation and liquid solutions
2
Under what circumstances would azeotrope exist in non ideal solutions? (when would the dew point curve and the bubble point curve meet?)