Can fluorine ever have a positive oxidation state?

I know fluorine is the most electronegative element but can we humans ever synthesize fluorine in a positive oxidation state like +1?

halides oxidation-state
Share
Improve this question
edited May 23 at 1:45
Bruh Moments
asked May 5 at 0:07

As noted in the referenced question, fluorine is not in the +1 oxidation state in hypofluorous acid (which, incidentally, is the only hypohalous acid that has been isolated) nor in any other compound where its bonds give it a complete octet. Even where the fluorine has a positive formal charge, attaching it to less electronegative atoms will lead to an oxidation state of -1.

However, it is possible for fluorine to show a zero oxidation state and for a fluorine atom to apparently show a positive charge. As one might expect, this occurs in one of the most unusual compounds in all of chemistry.

Striking gold -- and a lucky 7

That compound is "gold heptafluoride", $\ce{AuF7}$, whose unusual structure is reflected in the IUPAC name: instead of gold(VII) fluoride, it is officially called difluorinegold(V) fluoride. It is more accurately formulated $\ce{AuF5\cdot F2}$. It has been isolated at liquid nitrogen temperatures [1].

Himmel and Riedel [2] give calculations showing that unlike other heptafluorides, not all seven fluorine atoms are bonded to the central (gold) atom. Rather, the gold is bonded octahedrally to five individual fluorine atoms and a difluorine ($\ce{F2}$) ligand, the latter attached end on and rotated so that in the most stable conformation (according to most of the several optimization schemes used), the remote fluorine atom is eclipsed with one of the other ligands as if attracted to it (a, below, picture from [2]). The staggered arrangement one might expect (b) is instead a transition state in this fluxional molecule. If we assume that the individual fluorine ligands are negatively charged as usual, this interaction indicates that at least the remote fluorine atom, labeled $\text{F}_b$, is positively charged. 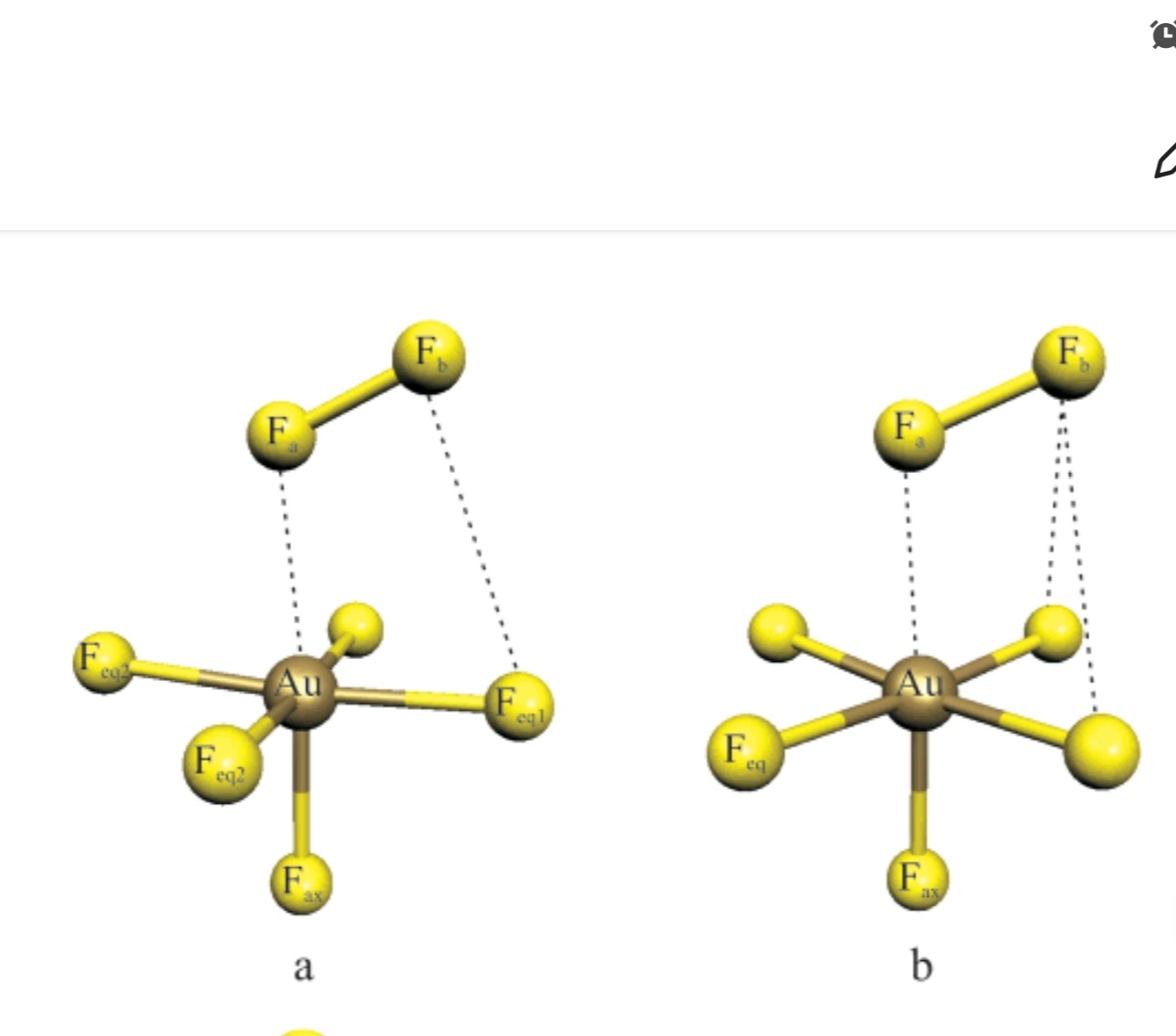 And indeed, Table 2 of the paper shows the following charge distribution:

To sum up, difluorine gold (V) fluoride has:

Not the answer you're looking for? Browse other questions tagged halides oxidation-state or ask your own question.

25
What should be the oxidation state of oxygen in HOF (hypofluorous acid)?
14
Does fluorine in FNO3 have +1 oxidation number?
5
Are there stronger oxidizing agents than fluorine gas?