This might be just an "everyday life science" question. I am a university professor but not in Chemistry so please educate me. Today I was adding some floor cleaner formula to water as instructed by the label. In the beginning, the solution became cloudy. However, as I added more formula, the solution became clear. I am curious why this can be and whether there is a name for such a phenomenon in Chemistry.

Just a little bit of formula added to the water; the solution was cloudy: 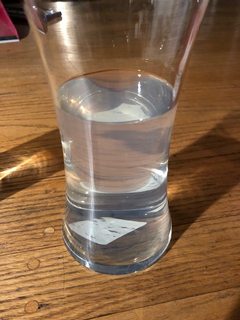 Then I added more formula; the solution becomes clear: 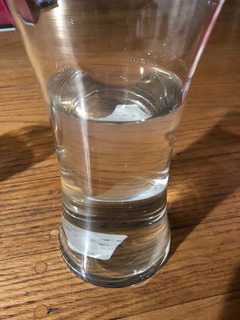 The cleaner is called "HOOVER FloorMate Grout & Tile Plus".

Out of curiosity, I checked its data sheet which states that it is a :

At very dilute concentrations, the solvating power of water overcomes the natural tendency of surfactant molecules to agglomerate into a separate phase. The shear numerical excess of water molecules just about totally dissociates the bulk surfactant and dissolves it as separate molecules. So a mixture of surfactant and water can be a true solution - clear and homogeneous.

However, as the concentration of surfactant increases, aggregates form (micelles) which can absorb oleophilic molecules (e.g., the polymers in the formula). With sufficient surfactant, the polymer is dispersed enough and into small enough micelles to appear clear. In the second graph, the knee of the curve is at the CMC; at this point, the aqueous phase is saturated with single molecules and some are beginning to stick together, starting to be able to contain polymer. 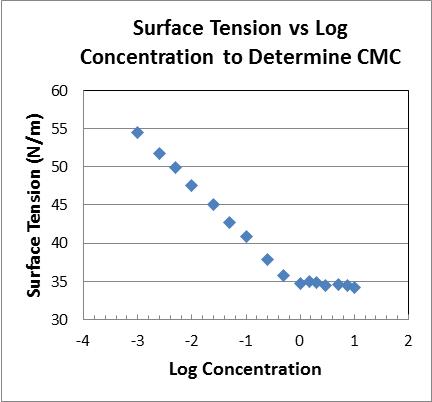 To get to the point: Your floor cleaner needs to be concentrated enough to work well. This suggests that there is enough surfactant to exert a solvent effect on the polymer, dispersing the chains, separating the molecules, making the smallest dimension significantly less than a wavelength of light. The original floor cleaner product could appear clear to the eye. Addition of a little of the product to a lot of water reduces the micelle formation of the surfactants by favoring dissolution of single surfactant molecules: the polymer chains then have fewer surfactant molecules to surround them. Polymer molecules escape, agglomerate and become visible - but only a little, since you can reverse the process.

A more delicate detection method is to use the Tyndall effect: in a darkened room, shine a narrow beam of light through a liquid (say from a single LED flashlight). The beam may be visible, much like a flashlight beam in a smoky room, and can detect some materials at levels in the ppm range (e.g., milk in water). 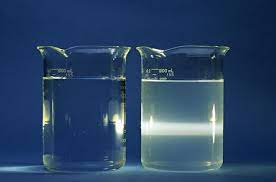 I suspect your floor cleaner would be represented by the middle test tube in the series of five. Small micelles are present but the liquid seems clear, and will seem to have a small or negligible Tyndall effect. The polymers will be dissolved in the many micelles, which are too small yet to be very visible. When you dilute, you go to the left one step, the surfactant becomes more dispersed into single molecules, exerting less solvent power on the polymer. Either the micelles grow so large as to become visible, or actually collapse, allowing the polymer molecules to agglomerate.

Adding formula back to the mixture increases the surfactant (the solvent power), redisperses the polymer molecules into tiny micelles, and the liquid becomes clear again. The key (hypothesis) is that the pure polymer dispersion would be cloudy by virtue of its large particle size (~1 micron?), but a high enough surfactant concentration makes the formula essentially clear by generating micelles much smaller than the wavelength of light.

In the opposite direction, when dissolving more and more aluminum sulfate into water, a turbid solution is first obtained, as the reaction is pushed to the right hand side. As more and more product is dissolved, the equation is pushed in the opposite direction, so as to decrease the number of ions in solution, which also destroys the $\ce{Al(OH)3}$ precipitate, and makes the solution transparent.

Not the answer you're looking for? Browse other questions tagged everyday-chemistry water solutions mixtures or ask your own question.

5
Standard solution and extracted solution : same concentration?
1
A substance that is immisiscible with water and that can be made cloudy
2
What made my solution cloudy?
3
Why did a former emulsion of oil and water precipitate after heating and cooling when heat made it originally?
0
Why sugar solution/sugarcane juice becomes sour when kept for certain time?
0
How to make foggy and cloudy plastic fully transparent?