I'm attempting to answer a question from my textbook, however the answer that the textbook provides doesn't make sense to me.

Laura, a VCE chemistry student, loves graphs and wanted to represent an equilibrium reaction by using graphs. The reaction she chose was:

Draw the rate-time graph for the reaction when the system is diluted at constant temperature.

Given my assumptions I drew a graph where the forwards and reverse reaction both dropped vertically then continued on at the same, lower rate of reaction in equilibrium.

But the answer provided by the textbook is as follows 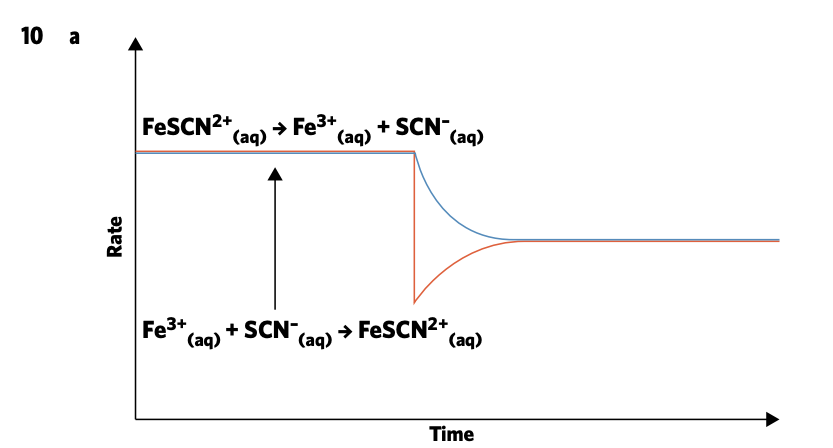 I just came across another question similar to this, and supposedly the system partially opposes the increase in concentration by favouring the reaction that produces the least amount of particles (in the same way as a change in pressure would cause the system to react). But if this is the case, and the concentrations are still balanced after the dilution, wouldn't it change the equilibrium constant? Which I have been told only temperature can change.

I'm assuming then that my understanding is flawed somewhere in regards to the system remaining balanced after the dilution, but I can't seem to see how diluting the system would unbalance the concentrations as they're all being decreased by the same factor.

Is the answer provided by the textbook wrong? Or is there something that I'm missing?

equilibrium kinetics concentration
Share
Improve this question
edited May 18, 2021 at 14:17

The rate forwards and back are the same at equilibrium and differ before this is attained. Let the reaction be $A+B=C$. If each concentration is suddenly halved then the reaction is not necessarily any longer at equilibrium and in this case the rates forwards and back differ until a new equilibrium is reached. The figure shows this. The red curve is the forwards rate $k_1[A][B]$ and the green one $k_{-1}[C]$ the reverse. As you see the new equilibrium takes a short while to re-establish. (You can ignore the scales they depend on the particular rate constants and concentrations used but the behaviour is general.)

The figure you show is not fully supported by the calculation. The red curve (forwards rate) agrees but the blue one does not. If you do not halve the product concentration you get the blue curve in the figure. 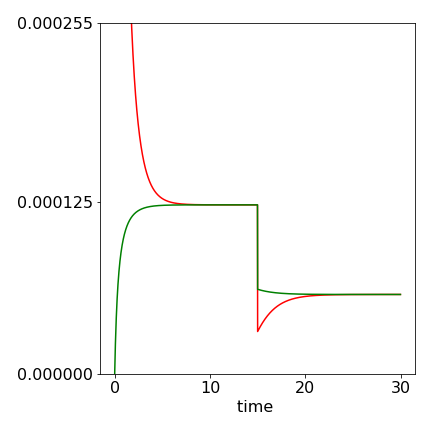 Not the answer you're looking for? Browse other questions tagged equilibrium kinetics concentration or ask your own question.

10
Which graph shows Chemical Equilibrium?
3
How do you calculate the equilibrium constant with the absorbance of a substance and the absorbance constant?
0
Why does increasing the available surface area of a pure solid not effect equilibrium?
0
Effect of removing the product from equilibrium
6
Equilibrium between barium carbonate, and barium oxide and carbon dioxide
10
What is the difference between chemical equilibrium and dynamic equilibrium?
1
How does the rate equation account for solids and liquids?