What is the difference between a coefficient and a subscript in a chemical equation?

Observe the following parts of an electron transfer equation:

The first equation says $\ce{Li}$ with a small subscript 2, however the second one says Al with a coefficient 2 instead of $\ce{Al2}$.

Can someone please explain this discrepancy and inconsistency I'm seeing? Why is lithium in the first reaction written with a small $2$, while in the second one aluminium is written with a big $2$? Why can't both of them be written in the same way? Does it matter? Is there a difference? How do I tell which one to use?

Why can't both of them be written in the same way? Does it matter? Is there a difference?

Yes, there is a difference, and it does matter! The placement of subscripts and coefficients tells you how the substances are put together on the atomic level.

Let's look at the first equation:

This one indicates that two moles of lithium combine with one mole of sulfur to form one mole of lithium sulfide. $\ce{Li2S}$ is called a formula unit or empirical formula, and tells you the smallest whole-number ratio of atoms that make up a "building block" of the compound. In this case, the smallest building block of a lithium sulfide crystal would contain two lithium ions for every one sulfide ion. Here's a picture from wikipedia to demonstrate: 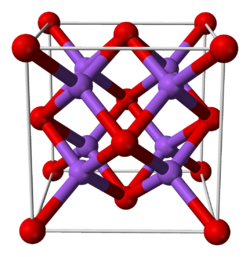 From this, we can learn that:

Coefficients tell us the number of moles, molecules, or formula units of a species

Now if we look at the second equation:

So to answer your question:

For your final question:

How do I tell which one to use?

You would have to know what the formula of the product is. In these examples, you can predict it by assuming that they are ionic compounds and balancing charges. You would get the correct answer, even though this assumption is not true for the second equation (it is actually a covalent compound, and you would just get the right answer by luck).

The question is quickly answered when you consider the ionic forms of the elements you present. It is easy if you break down the reaction into simple oxidation and reduction reactions:

I put the last step in parentheses because usually we give formulae of ionic compounds with the smallest integer amount possible, which would be $\ce{AlBr3}$ and not $\ce{Al2Br6}$. This should answer your question about which one to use.

Is there a difference?

Yes. For example $\ce{AlCl3}$, a lewis acid, can dimerize to $\ce{Al2Cl6}$. Which one you mean depends on the formula you give and can be a barrier of understanding in a conversation.

1
What is the difference between 'particles', 'molecules' and 'chemical species'?
2
Disproportionation Reactions of the Halogens: Writing balanced net ionic equations for four reactions. See details
9
What is the chemistry behind cleaning silverware with aluminium foil
8
How to calculate the pH of an acetic acid/ calcium acetate buffer?
2
Understanding how to calculate the pH of a buffer with ice tables
2
Coefficient in front of molecules in a chemical equation
8
What's the difference between reactant, excess reactant and limited reactant in a balanced equation?
0
The reaction of iron with sulfur to produce Iron(II) sulfide is inconvenient (for me)
0
Multiplicity prefixes for complex compounds with organic ligand