Update: possible duplicate: What is the precise definition of Ramachandran angles?. Question modified.

The conventions we have adopted for the standard configuration ϕ = ϕ' = 0°) and for the positive sense of rotation for the two angular parameters ϕ and ϕ' are indicated in Fig. 1.

Also they had adapted a very different values, 0 to 360 degrees for ϕ and ϕ'. They provided the Ramachandran plot like this: 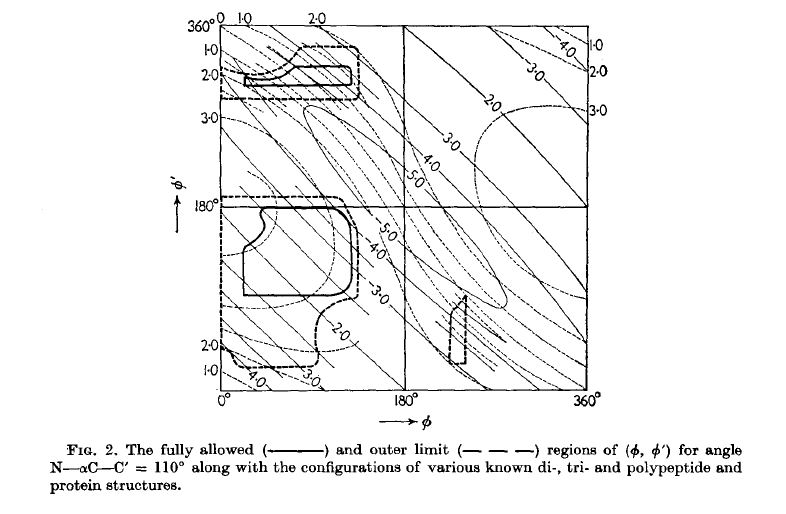 This looks very different from the Ramachandran plot we see nowadays because:

So my question is basically:

On todays convention; how we define the zero value, positive value and negative values of phi and psi dihedral angle? and how does the new and old convention relate?

I did not find anything on intensive internet search. I got one graphic without any reference

I am doubtful about this diagram because its Zero degrees seem to be the zero degree of Ramachandran's original plot.

Many thanks in advance

The meaning of angles with value of zero is the same. 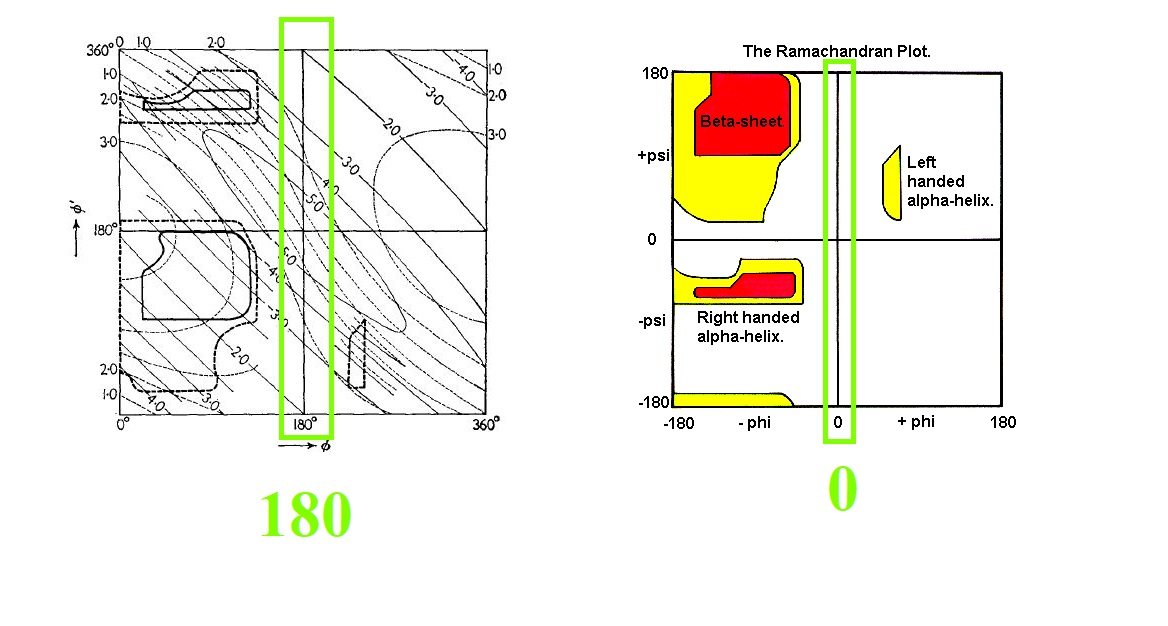 Evidently the old $\phi$ is measured from an angle oriented $180^\circ$ relative to the new convention. This implies that the amide H ($H_N$) rather than carbonyl carbon was used as the reference fourth atom used to define the dihedral, since these atoms are related by a $180^\circ$ rotation. The old choice of atom is opposite on the chain to the modern convention of using the heavy backbone atom (carbonyl carbon). You can obtain angles in the new convention by subtracting $180^\circ$ ie $\phi \rightarrow \phi - 180^\circ$.

By the way inspection shows that this is the correct interpretation. See for instance the following diagram. The extended (beta/turn/pII) region is usually larger than the alpha region. The beta region sits at large values (below $180^\circ$) of $\psi$, whereas the narrower alpha region is close to $0^\circ$ (at negative angles): 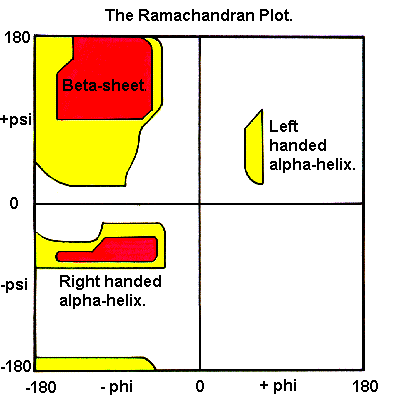 In Ref. 1 Ramakrishnan and Ramachandran explain the differences in the conventions:

At a recent conference of some of the representative workers in this field held in Bethesda, it was decided to denote the two dihedral angles about the bonds N-Ca and C.-C' by $\phi$ and $\psi$ respectively, the sense of rotation being the same as that adopted here. The fully extended chain, with N-H and C'=O trans with respect to one another, is to be taken as the standard conformation with $\phi$=$\psi$=0.

This paper was finalized well before this meeting, and so the older conventions are adopted here. However, it is proposed to use the new notation in the following papers in this series. 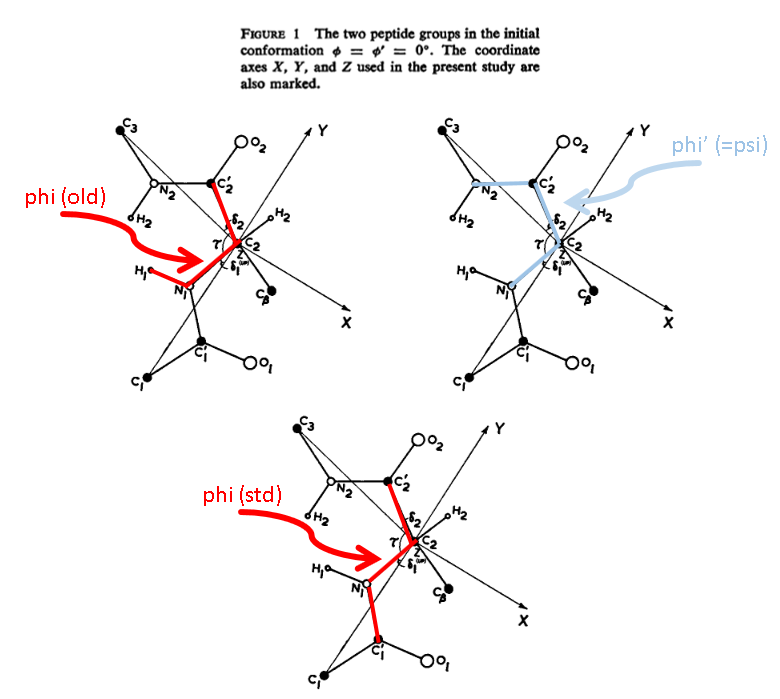 I've attached a figure to show the dihedral angles. Hope this helps.

Part of a peptide chain. The four atoms defining the $\psi$ (N to N) and $\phi$ (CO to CO) torsion angles are shown on the right. As these chains are drawn as if completely extended, the angles are $180^\text{o}$. When the main chain atoms are eclipsed, the angles are zero. The 6 atoms in the shaded areas are in the same plane.

Ramachandran plot together with the structure for bacteriorhodopsin. 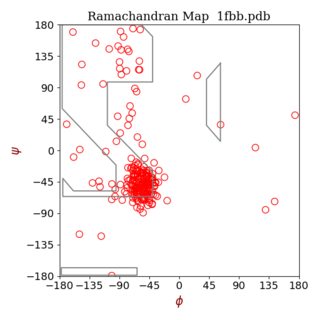 The structure of the protein shows extensive helical structure. The retinal chromophore, which is positioned in the centre of the column of helices, is shown also. 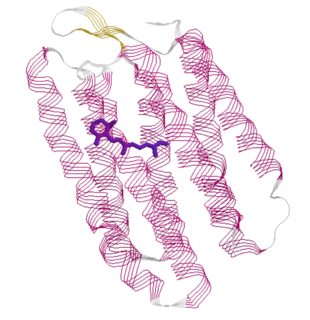 This is not really an answer. This is some conclusions or assumptions.

It is quite clear that the graph look is unchanged along horizontal axis. 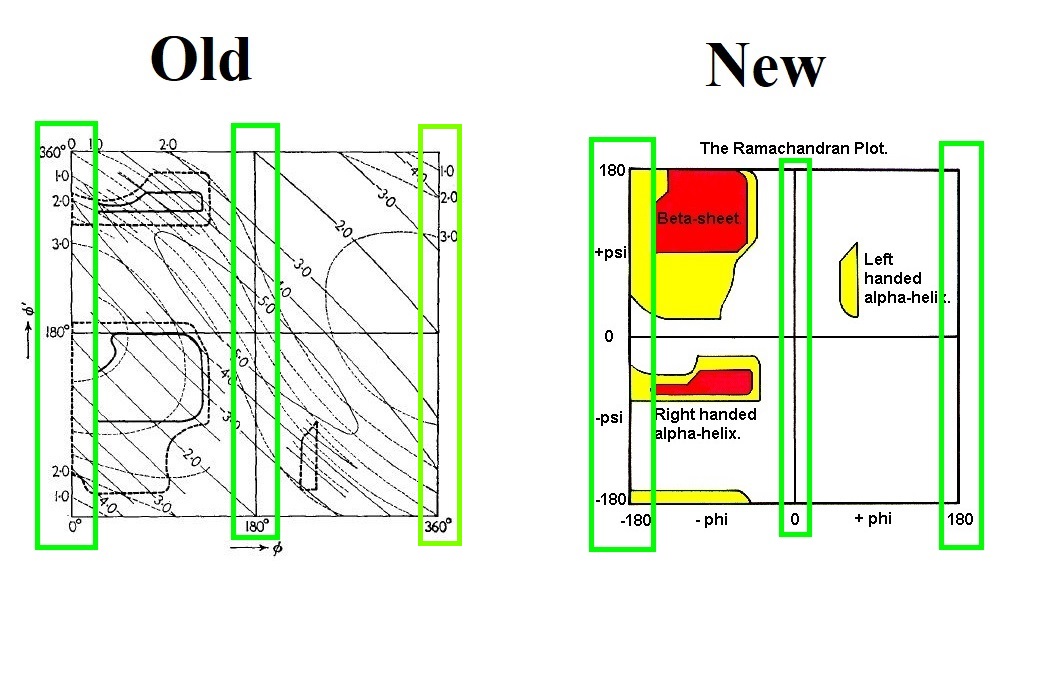 Where ϕ (old) corresponds to ϕ (new) as follows:

Note that diagram is scroll shifted. 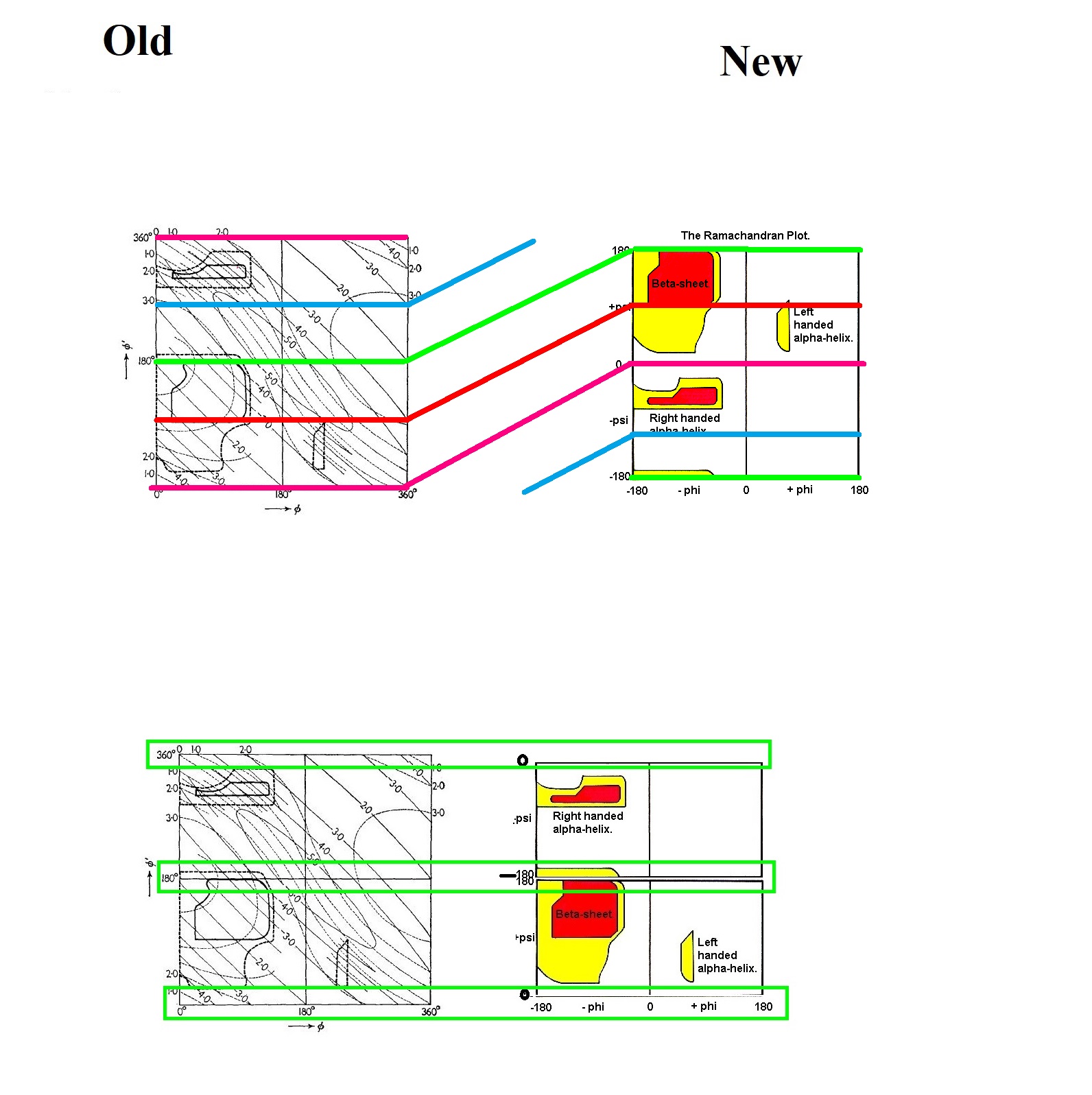 Where ϕ' (old) and ψ (new) are related as followes:

It means we do not have a frame shift between ϕ' (old) and ψ (new) , although there is the difference in direction of counting the angle, from where the negative sign comes.

[OP] On today's convention; how we define the zero value, positive value and negative values of phi and psi dihedral angle?

In general, you have four atoms (1, 2, 3, 4) in a chain to define a torsion angle. You rotate around the bond connecting atom 2 with atom 3 to change the torsion angle (bond angles and lengths stay constant). The conformation where 1 and 4 are closest is called zero degrees (cisoid). The conformation where 1 and 4 are furthest apart (transoid, extended conformation) is called 180 degrees. In both cases, all four atoms are in a single plane.

For a mathematical treatment with figures, see https://www.math.fsu.edu/~quine/MB_10/6_torsion.pdf

For the protein main chain, there are multiple ways to define a torsion, e.g. N-CA-C-N or N-CA-C-O. Switching the definition will lead to a shift of torsion angles by 180 degrees. The current convention, however, is to use N-CA-C-N and C-N-CA-C, and this is reflected in the current version of the Ramachandran plot.

The authoratative reference for the definition of torsion angles in general is the IUPAC gold book, citing DOI:10.1351/pac199668122193. 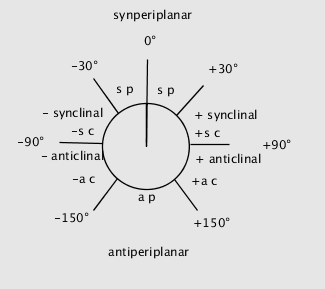 The authoratative reference for which atoms are used to define phi and psi seems to be Richardson, J.S. (1981). "Anatomy and Taxonomy of Protein Structures". Advances in Protein Chemistry. 34: 167–339.

Not the answer you're looking for? Browse other questions tagged biochemistry stereochemistry proteins or ask your own question.

6
What is the precise definition of Ramachandran angles?

6
What is the precise definition of Ramachandran angles?
0
Ramachandran Plot for Phi and Psi angles of peptides