Why can't the energy of an electron exceed 0 eV?

I couldn't understand, or comprehend, how or why the energy of an electron can't exceed $\pu{0 eV}$? What is the reasoning behind it; why is it not possible and what is the physical significance of it.

For the sake of the argument, what would it look like if the total energy of an electron were to exceed $\pu{0 eV}$?

The value of the energy in the Bohr model is zero when the quantum number is infinity because that is the limiting value of the Coulombic potential at large distances, and because the electron is assumed bound to the nucleus (the atom is stable), which constrains the value of the total energy.

where $r_n$ is the allowed orbit radius in the Bohr model, which illustrates how the energy becomes more positive (goes to zero) as the average distance between the nucleus and the electron increases.

The Bohr model assumes the universe consists of just one electron and nucleus. It is implicit in the model that the electron is bound (the electron and nucleus can never get far enough apart to escape their mutual attraction). According to the virial theorem the total energy in the above equations is one half of the Coulombic potential energy and the negative of the kinetic energy. That means the expectation values of the potential and kinetic energy for a given quantum number are fixed, and that the value of the total energy is bounded by the value of the potential energy (see Eq. 1):

In addition, in practice external fields might interact with the atom, contributing to the potential. It is possible for instance to superimpose a uniform linear potential on the Coulombic potential. The solutions (wavefunctions) for the new perturbed atom are not identical to those of the original isolated atom. Suffice it to say that if you now pull the particles apart far enough they will eventually be free to follow trajectories that are no longer bound.

The following figures illustrate (roughly) the energies of an atom (for Z=1) before and after superimposing an external linear potential, plotted against the quantum number or the orbit radius in the original Bohr model. In the case of particles starting at rest, what determines whether particles will remain bound or fall apart is relative values of the potential. It is the slope of the potential that determines forces that drive particles together or apart. In the last figure, the (slight) downward slope at large r as the radius increases indicates that particles at rest starting at this internuclear distance are no longer bound. 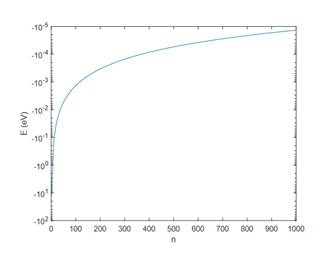 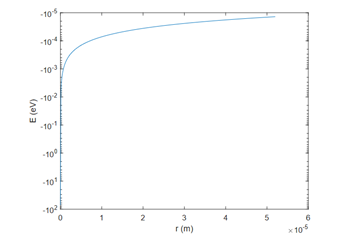 ... and perturbed by linear potential 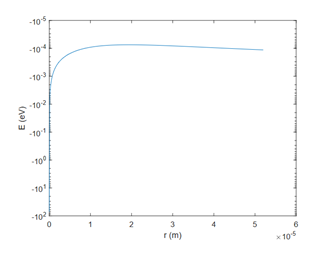 An electron can also be excited by a photon into the continuum of non-quantized states with energy greater than zero, but then the energy is no longer described by the Bohr model. The excess energy (greater than the ionization energy) amounts to the kinetic energy of the dissociated (nonbound) state (which is alluded to in the other answer).

You might also want to read these other posts.

The OP can understand, mathematically, why the energy of the electron in the Bohr atom is zero at infinity, so let's avoid the mathematics in order to assist the imagination.

In the (small?) universe which consists of just a single hydrogen atom (plus all necessary equipment to measure potentials and distance), it is necessary to cause a separation of the electron and proton, but this equipment is never described. It consists of two very tiny tweezers each connected to a remote controlled motor which grabs the electron and proton and moves them slowly apart so their attractive force and energy can be measured. Of course, when the separation gets to infinity, nothing further can be done, and the energy equals zero, or the ionization energy of a hydrogen atom, whatever you have selected as reference.

However, if you are inclined to be somewhat mischievous, and adjust the separating device to speed up, you could supply so much energy to the electron (the proton will be the center of mass of your tiny universe) that its velocity does not trend toward or decrease to zero, but continues to carry it away from the proton. Where to? Well, it could just bounce around in that universe, totally unbound to the proton, or it could penetrate into the next universe (you know, like photoionization kicks an electron totally out of the metal it started from).

The question resembles Zeno's Paradox (Achilles and the tortoise https://en.wikipedia.org/wiki/Zeno%27s_paradoxes) in that it only considers the range of energies up to the unbinding or ionization of the electron.

6
Energy required to remove an electron from He
2
Why does increasing orbital energy mean an electron can be more easily lost?

7
Atomic emission spectra: classical vs. quantum mechanics
9
Trying to understand the necessity of orbital approximation or the independent electron model
8
Significance of phase of atomic orbitals
6
Why is there an orbital angular momentum if the electron isn't properly revolving around the nucleus?
14
Why does the exchange interaction in Hartree-Fock theory lower the total energy?
1
Effective nuclear charge and electron repulsion
0
Finding excited stage of electron from its potential energy