Find the structural compound from carbon and proton NMR spectrum

The proton and carbon NMR spectrum datas for compound W (201 g/mol) are shown below. Based on Diagram 1 and Diagram 2, draw the structural formula of compound W according to the type of hydrogen and carbon. 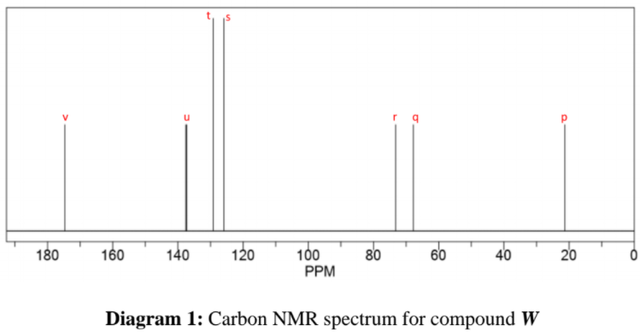 I have extracted the information from the NMR spectrum into a table.

Wow. This is a very bad question (the exam/assignment, not the OP's). There is no way that you can categorically determine the structure of this based only on the information given. This would have to be open-book providing access to chemical shift tables in the very least. Peaks are poorly labelled and what's more, I believe the molecular mass is incorrect. Anyway, let's break it down into a thought process and see what we come up with based on the information given.

What we know from first inspection: these are simulated spectra - no solvent is defined (this makes it very difficult to make predictions on labile peaks). No field is defined, so coupling constants cannot be used. Either we have to use chemical shift mapping only, or are expected to make some guestimates based on peak heights and linewidths to determine numbers of C/H. But we assume that the information provided can lead to a definitive structure.

From the 13C spectrum- we have 7 labelled sites - but is the peak labelled u actually two closely adjacent peaks?? It's a lot thicker than the other lines. I think so, and the gut feeling looking at the aromatic region of the 1H spectrum suggest a 1,4-disubstituted benzene. So I'm going to say 8 sites. The intensities (one of the joys of simulated 13C spectra is that peak intensities are quantitative) show that t and s each contain 2 equivalent carbons. So, we get 10x carbons.

Now, let's work out a molecular formula based on C10H13XnYm... yuck. I'd like to think that for a problem question like this, any inclusion of a non-standard nucleus would be made abundantly clear. You can work out a range of formulae based on this mass by hand, but it's quicker using a tool like https://www.chemcalc.org/mf-finder. Whack in 201, limit it to C10H13, and you come up with junk. Add some flexibility around numbers of C and H, and you come up with mostly non-integer DBE, so alarm bells are ringing. So, let's leave the molecular mass and look closer at the NMR fragments.

From the 1H spectrum: peaks at c, d and g are labile, and in slow exchange, so probably not connected to 13C. Chemical shift information is largely useless without knowing the solvent for labile peaks. For instance, an -OH peak comes at about 1.6 in chloroform, but around 3.5 in dmso. For -NH2, the differences are even larger.

So, now let's pair up the carbons and protons to see what fragments we might have:

g could be just about anything, but in the absence of any other information I'm going with something simple like a carboxylic acid. That would tie in with the chemical shift of v. the key map pairs are b/q and e/r, as they have quite distinct 13C/1H shifts with (probably) vicinal coupling. It looks small enough to be vicinal. So, this to me looks very like a 1,2-diol. But the broad peaks in the 1H spectrum suggest a ratio of 1:2, so perhaps a 1,2-olamine.

So, I think we've got the following groups:

How do we put them all together. Well, honestly, if you've got no other information to go on, then you could put them together any way you like and it would be close enough. I think it's too close to know whether the olamine is Ar-C(OH) or Ar-C(NH2). But we can probably guess that we have Ar-CH3 rather than Ar-COOH because the quaternary peak would shifted upfield if it were a benzoic acid (due to increased elecrton density on that quaternary). So, armed with that, I plugged in the following molecule into ChemDraw and got it to spit out a 13C prediction:

Well, at least I know what prediction software your examiner uses. Identical to your question. The 1H prediction is not identical, giving the following in dmso:

You'll notice the labile peaks are indeed all over the place. But as 1H chemical shifts are not good guides for accurately determining structure alone, I am happy to ignore these. Structure determination software uses 13C chemical shifts and connectivities to determine structure, and rarely even considers 1H chemical shifts. So we have a molecular formula of C10H13NO3 with a mass of 195. I believe this is an error in the paper, although will be very interested to see another answer that can map the 13C shifts and get a mass of 201.

Hope this is helpful.

Interesting Problem and quite a nailbiter.

I will try to sort some of my ideas, even thought this won't be a full answer.

I can throw in some suggestions but they are realy wild and you need to look in deeper.

Hope this brings the project forward.I am very happy to hear, what the compound was when you get a result.

Not the answer you're looking for? Browse other questions tagged organic-chemistry analytical-chemistry nmr-spectroscopy or ask your own question.

11
Why are all the phenyl protons in benzyl alcohol equivalent in the ¹H-NMR spectrum?
5
Proton NMR Spectrum for Nicotinic Acid
0
What is the identity of the unknown compound using GCMS and NMR?
4
The carbon-13 NMR for 1,1,1-trichloroethane
0
How to identify the structure of an organic acid based on its reactivity, mass and NMR spectrum?
4
Am I using these spectra to identify the compound correctly?
1
Determining structure from C-NMR spectrum, is my answer correct?
6
Sensitivity of Carbon NMR Compared to Proton NMR