What is the difference between "vapour" and "gas"?

I have read the definition of vapour on Wikipedia, but I don't seem to have a clear idea about the difference between a vapour and a gas. I know what it means when it says, "gas at a temperature lower than its critical temperature". 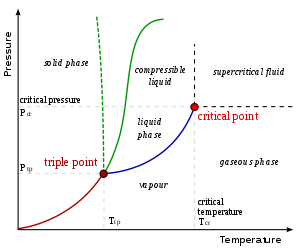 In this graph, the blue curve, means the part where gaseous and liquid phase coexist, so did the scientists coined the term Vapour for only this reason so, that we can have orderly fashion of different states of matter ?

Vapor is a much older word alluding to dampness and it was not coined by scientists. It is in use since the 1300s. The actual meaning of meaning of vapor is "Matter in the form of a steamy or imperceptible exhalation; esp. the form into which liquids are naturally converted by the action of a sufficient degree of heat. This is the original 13th century meaning of vapor. The German equivalent of vapor is Dampf (which is relatively clearer in terms of feeling- imagine entering a basement which is damp from water vapor). Gas is relatively a new word as per the unabridged Oxford English Dictionary, and it entered English in the 1600s.

In fact, the OED mentions the distinction "Gas: A substance in a state in which it expands freely to fill the whole of a container, having no fixed shape (unlike a solid) and no fixed volume (unlike a liquid); spec. (distinguished from a vapour) such a substance above a critical temperature such that it cannot be liquefied by the application of pressure alone"

You can also think of the general meanings of vapor in scientific usage:

A substance which is a liquid at room temperature or under ambient conditions, and if it is heated enough so that the liquid evaporates (same root of word), you can call that as vapor of that substance.

Examples: Mercury is a liquid metal, when it is heated enough in a an electric bulb, it becomes a gas, hence the name mercury vapor lamp. It is not called a mercury gas lamp.

It is not necessary that heat be involved. You will find the usage "cold vapor method for Hg analysis" again for mercury which means that Hg was a liquid in a sample but by blowing a gas over it, it has been evaporated.

The recent meaning of vapor from OED, "Vapor: In modern scientific use, a fluid that fills a space like a gas but, being below its critical temperature, can be liquefied by pressure alone."

The normal use distinguishes "vapour" from permanent gas

At normal lab conditions there is a (fairly obvious) distinction between things that could exist as liquids and things where no liquid phase is possible. Oxygen, for example, is a permanent gas, but dichloromethane is not. But the vapour pressure of dichloromethane is pretty high and there will be a fair amount of it above the liquid in a flask of the substance.

In this sense it is useful to distinguish between a vapour and a gas.

But the distinction is sometimes a little blurry. Butane would normally be called a gas but will liquefy under moderate pressure; Nitrogen is a gas but is commonly used in laboratories as a very cold liquid.

But, under normal lab conditions both butane and nitrogen would be described as "gas" but the "gas" above boiling dichloromethane during a distillation would normally be described as a "vapour".

So the terms are a little useful, but not very precise in any technical sense.

The chart in the question uses a more stringent criterion for the regions called gas and vapour that only labels a region gas at a temperature above the critical point where there cannot be any distinction between the two at any pressure. I think conventional conversational use by many chemists is broader than that and considers normal atmospheric pressure as well as temperature which is more useful and pragmatic at lab conditions.

I'm surprised the OED has such a strict definition for gas. I could not find a strict definition in the IUPAC color books (certainly not in the gold book). Presumably these words are in such common use that their definition is assumed understood or easily found. The analytical compendium (orange book) and physical chemistry book (green book) mention vapour (or vapor) in entries for the meaning of the abbreviation g:

The green book (physical chemistry) also has an entry for vapour pressure and for the abbreviation vap:

and definitions for a variety of acronyms that include the word vapor.

There is no suggestion there that gas should be restricted to the description of substances in their supercritical phase.

Curiously the IUPAC books do not adopt a uniform spelling convention. Some choose the spelling vapour, others vapor.

In common usage, a vapor is a gaseous substance emanating from a condensed phase. The scientific meaning is roughly consistent with common use. Vapor implies the existence of a condensed phase that is the source or destination of the gas, or with which the gas may be in equilibrium; while gas does not make such an assumption.

The origin of vapor is presumably Latin with earlier roots in Ancient Greek.

The origin of the word gas appears to be the Greek word chaos by way of Dutch:

It's a bit misleading for a state-diagram to label a region "vapor" in a manner that might imply that a vapor's not a gas.

State-diagrams should refer to "gas", not "vapor".

These aren't alternatives; something can be a gas or/and a vapor. Examples of each combination:

State-diagrams are primarily about states-of-matter, i.e. the gas/liquid/solid thing, so usually a state-diagram should label things as "gas", not "vapor".

We can talk about "vapor" to stress a relationship with a condensed phase.

Often we talk about

etc., in terms of "vapor", rather than "gas", to stress the relationship with the condensed phase.

To be clear: once something vaporizes, it's a gas. That said, we might continue to refer to it as a vapor as well, stressing the physical closeness to the condensed state.

Discussion: Where would vapor be on a state-diagram?

Since "vapor" isn't a state-of-matter, it doesn't really have its own region in a state-diagram. Instead, it'd overlap with the gas-state near boundaries with condensed states (such as liquid and solid states).

A gas would be most vapor-like right at a boundary with a condensed state. The further a state is from a transition between a condensed-state and gas-state, the less vapor-like it'd be.

In college, I had a thermodynamics teacher who was awesome. He had a way of explaining things that were accurate and easy to understand. He explained this difference to us this way:

A gas will not condense into a liquid with an isothermal compression. (i.e. an Ideal Gas)

A vapor will form liquid when isothermally compressed.

His example: When you boil water, you get vapor. Hold a spoon over the kettle and it will get water droplets on it.

Steam is heated to a much higher temperature. "If you hold a spoon in from of a steam jet, there will be no condensation. Although, I suggest you not do that because you will be burned." (He tried to have a sense of humor.)

Vapor (or steam for H2O) can be used for the gaseous form of a particular substance which at normal T and P are solid or liquid. They are all gases although not always ideal (steam is certainly not ideal below its critical T).

21
Why must both the critical temperature and pressure be exceeded to achieve the supercritical phase?
3
How accurate would be the following conclusion on 'Critical Temperature'?
0
Vapour pressure and equilibrium constant
2
Why do gases coexist as liquid and vapour?
2
What happens when a super-critical fluid is compressed?
4
Can we compare the vapour pressure of solutions whose concentrations and temperature is known?
4
Will addition of inert gas change the vapour pressure of a liquid?
1
Is it appropriate to say "solid-in-gas solution" and "liquid-in-gas solution"?
1
Can vapor pressure be defined for permanent gases?