Why do I see two peaks for methyl salicylate in my GC–MS spectrum? 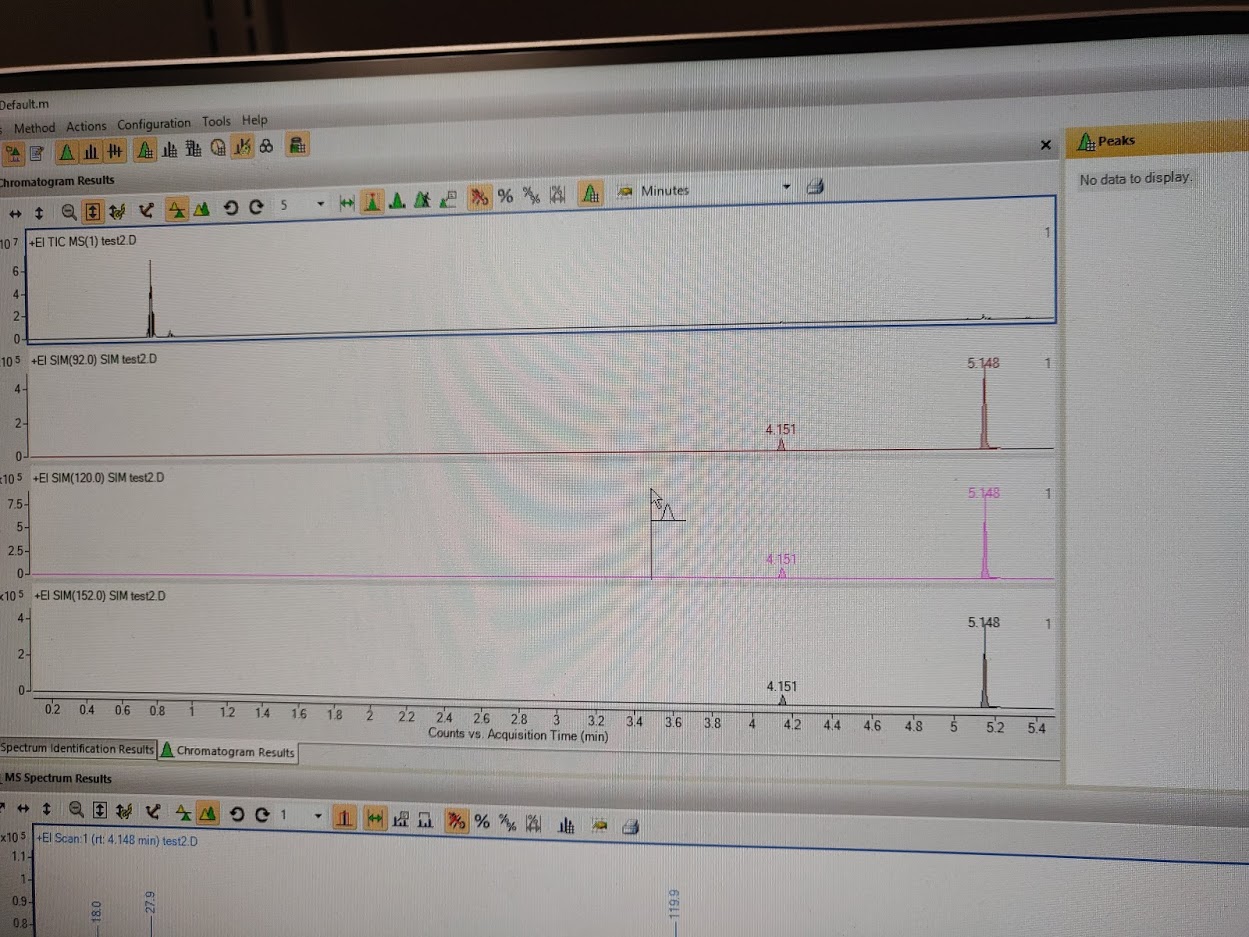 Both peaks are identified by the NIST spectrum database as that of methyl salicylate. Considering this is a neat sample and is not contaminated or diluted, why do I see two peaks in my spectrum?

The short answer: Do not rely on the SIM trace alone. Amplify the representation of the trace about the TIC (total ion current) until you see a reasonable peak intensity at the same retention time as in your SIM traces (perhaps a time spectrum, but not a mass spectrum). Then integrate with the peak-shaped cursor (currently shown in the magenta coloured trace of one SIM) in the trace of the TIC and equally consult the then displayed EI scan at this time interval (in part already seen at the lower part of your photo) to assess the mass spectrum. Compare this to a trustworthy reference spectrum; e.g. an authentic sample; your spectrometer's library; NIST, SDBS, etc.

The longer answer: Your experiment coupled a separation technique, either GC, with an analytical, MS. Often, the mass resolution of these simpler, less-boxy bench-top MS hyphenated to the chromatography (i.e., not a tandem MS-MS detector) is low compared to, e.g., a sector field mass spectrometer. Thus, observing the SIM traces alone is more like asking «tell me if whatever ion passes the detector with a $m/z = 119.2$», or even worse «tell me if any ion passes the detector in the range of $m/z = 119 - 121$. You will see this approach often used (sometimes misused) in HPLC-MS if one is not sure about the setup's sensitivity for $\ce{M+}$ vs. an adduct like $\ce{[M + H]+}$. Or because the software allows you to check for an $\ce{NH+_4}$-adduct after the chromatography run is recorded because your eluent included an ammonium buffer.

Only if you couple the information by the SIM with the integration in the TIC to yield a complete mass spectrum you may collect additional evidence that the peak in the SIM may belong to your target compound. Otherwise, it could be (but need not to be) caused by an ion which accidentally shares the same ratio of $m/z$ within the setup's resolution in time (think elution of chromatography, scan rate of the MS), and mass (the MS) to your fragment in question; but shows up regardless if it belongs to the defragmentation pattern of your target compound, or not. Without additional inspection of the spectra it equally may be an impurity, e.g. the sample just before yours was too concentrated and some is eluated (and subsequently characterized by the MS) now altogether with your sample.

Without the separate inspection of these integrated spectra around $t_R = \pu{4.1 min}$ and $\pu{5.1 min}$, the present form of your question does not allow to answer if one of these peaks (and if so, which one) safely may be attributed to methyl salicylate. A mixture of isomers of compounds, e.g. (cis)/(trans) dienes may elute at different times and -- depending of the $m/z$-ratio you set for the SIM -- equally yield two peaks in the SIM but distinctly different mass spectra.

I offer the following explanation for the fragments of the mass spectrum of methyl salicylate (1, m/z 152). Loss of methoxy radical affords acylium ion 2 (m/z 121). Subsequent loss of a proton from 2 gives rise to the base peak 6-oxomethylidenecyclohexa-2,4-dien-1-one (3). Loss of carbon monoxide from 3 produces carbene 4, which rearranges to cyclopenta-2,4-dien-1-ylidenemethanone (5). 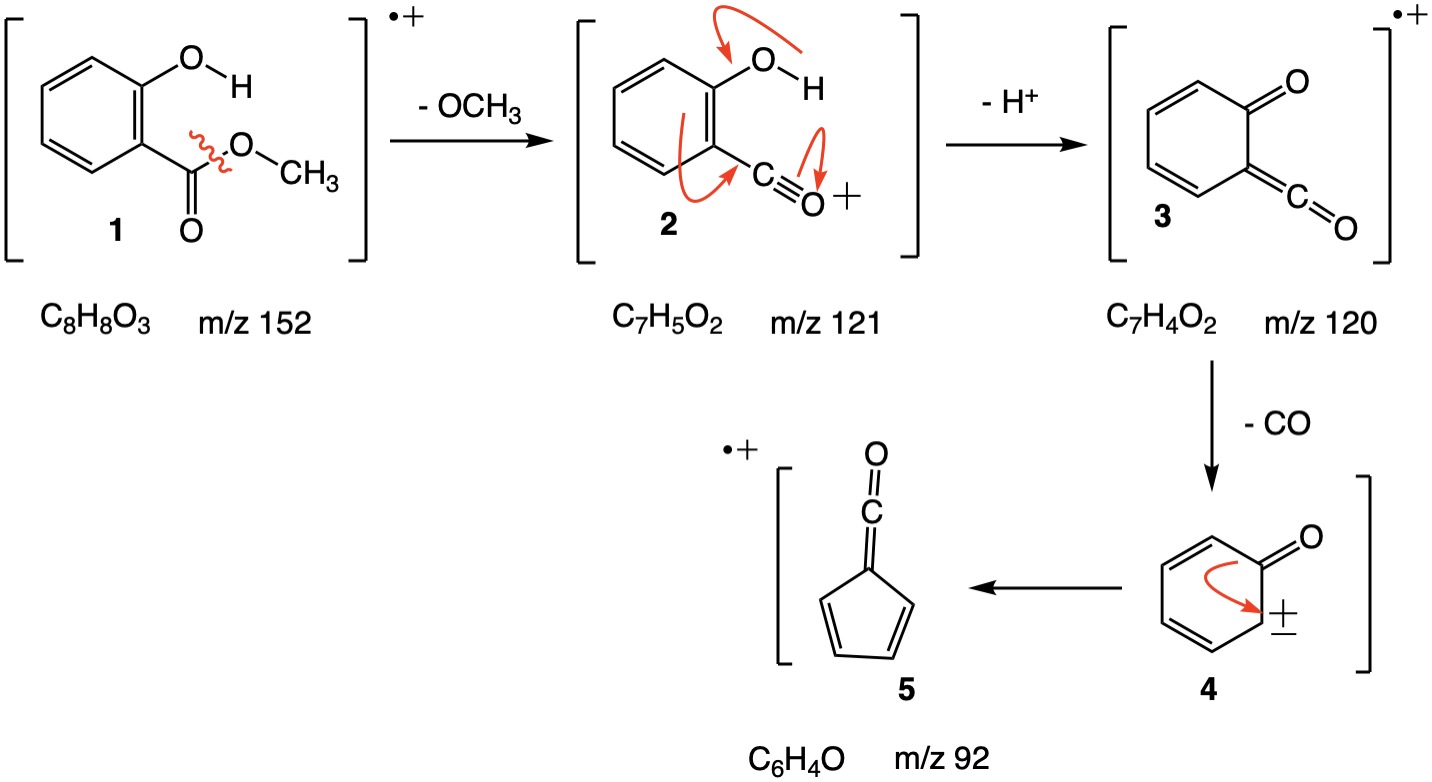 Neat or pure for organic chemists has a different meaning for analytical chemists. What does your manufacturer label say? 100% pure methyl salicylate? That is not possible. It must have closely related impurities. Did you try a thin layer chromatography experiment with this sample?

There is no concept of 100% pure substance in analytical chemistry, especially if you are doing GC. MS is so sensitive that it can detect parts per billion level of impurities.

I gather you are concerned about the two peaks in the total ion chromatogram (TIC, top), between 4 and 6 min, almost invisible in your picture?

It seems that a very closely related impurity is generating the same fragments and this is the source of two peaks.

Some more things to worry about: a) Did you wash the injection needle very well? b) Did you run the blanks, inject air (possibly)? c) Are the peak positions reproducible in retention time? Sometimes there are carry over problems or peaks appear from the previous run if you did not wait long enough.

Not the answer you're looking for? Browse other questions tagged organic-chemistry analytical-chemistry chromatography mass-spectrometry or ask your own question.

4
UV-Vis Spectra: Multiple peaks for one component
3
In a mass spectrum, are there peaks corresponding to a combination of 13C and bromine isotopes?
2
How many peaks of HCl are found in a mass spectrum?
3
I am seeing Doublet of Doublets peaks when I should see just a doublet