Determining whether a compound is ionic or molecular in nature [closed]

Ask Question
Asked 5 months ago
Active 4 months ago
Viewed 370 times
1
$\begingroup$
Closed. This question is off-topic. It is not currently accepting answers.

$\ce{NH4NO3}$ is an ionic compound because there is an ionic bond between $\ce{NH4+}$ (an ammonium ion) and $\ce{NO3-}$ (a nitrate ion) even though all the atoms comprising the molecule are non-metal.

Then, which of the following is true?

How do you tell if a bond between the two ions are molecular or ionic? (regardless of whether they are polyatomic or monoatomic ions)

In principle, when studying a structure like HCl, CH3COOH, or any other compound, the first thing to do is drawing the symbol of the atoms in a reasonable geometry on a sheet of paper. Then consider the outer electron layers : put enough points around each symbol to get a reasonable Lewis structure. For example, one point near $\ce{H}$ and six points around $\ce{O}$. Then try to join atoms with their neighbors to make covalencies (or doublets). When all atoms are joined to neighbors, count the number of electrons around each atom, taking into account that the two electrons included in a covalence between A and B are at the periphery of both atoms A and B. Check all atoms. If an atom respects the octet law, don't modify it : its structure is covalent. If an atom A does not respect octet law, try to remove one electron from its outer layer, and send this electron to the B atom, which becomes negatively charged. The covalency disappears from the region between A and B, and the bond AB becomes ionic with a positive charge on the A atom, which becomes $\ce{A+}$, and a negative charge on $\ce{B}$ which becomes $\ce{B-}$.

Using this method, you will see that $\ce{HCl}$ and $\ce{CH3COOH}$ are both made of covalencies, because all their atoms are respecting the octet rule. You will also see that $\ce{NaCl}$ may first be drawn in a covalent structure. But then the sodium atom does not fit the octet rule. It will if an electron is removed from the sodium atom, to be given to the chlorine atom, producing then $\ce{Na+}$ and $\ce{Cl-}$ ions.

Oxygenated acids are a special case. They may get two sorts of bonds between $\ce{A}$ and $\ce{B}$. For example sulfuric acid $\ce{H2SO4}$ can be drawn with this method to give first a covalent structure with two bonds $\ce{H-O}$, two bonds $\ce{O-S}$, and two double bonds $\ce{S=O}$. This is OK for all atoms except the central Sulfur atom, which is surrounded by six doublets or six covalences. At this point, some chemists are thinking that it is a case of hyper valence. Some think that the octet rule may be obtained by removing the second bond from each double bond from the sulfur atom, and sending it to the outer Oxygen atom. This makes a central sulfur atom charged $2+$ (respecting the octet rule) and two oxygen atoms charged $1-$. Both theories can be discussed.

The only problem with this reasoning is the fact that it does not work properly for atoms of the third column. For example, $\ce{BF3}$ should be ionic making $\ce{B^{3+}}$ and $\ce{F-}$ ions. Indeed $\ce{BF3}$ remains covalent, and it is hard to justify. Maybe, on may admit that Boron atom prefers to stay covalent rather than to loose three electrons. Three is probably too much.

Compounds consisting of non-metals are usually considered molecular (or covalent compound). The given compound $\ce{H3C−COOH}$ is acetic acid (or ethanoic acid) and consists of only non-metals, i.e, Carbon, Hydrogen and Oxygen. There is a difference of less than 2.0 in electronegativity on Pauling scale between the Carbon and Hydrogen. This difference results in an electrons being shared between the non-metals. The shared pairs or bonding pairs is covalent bonding. 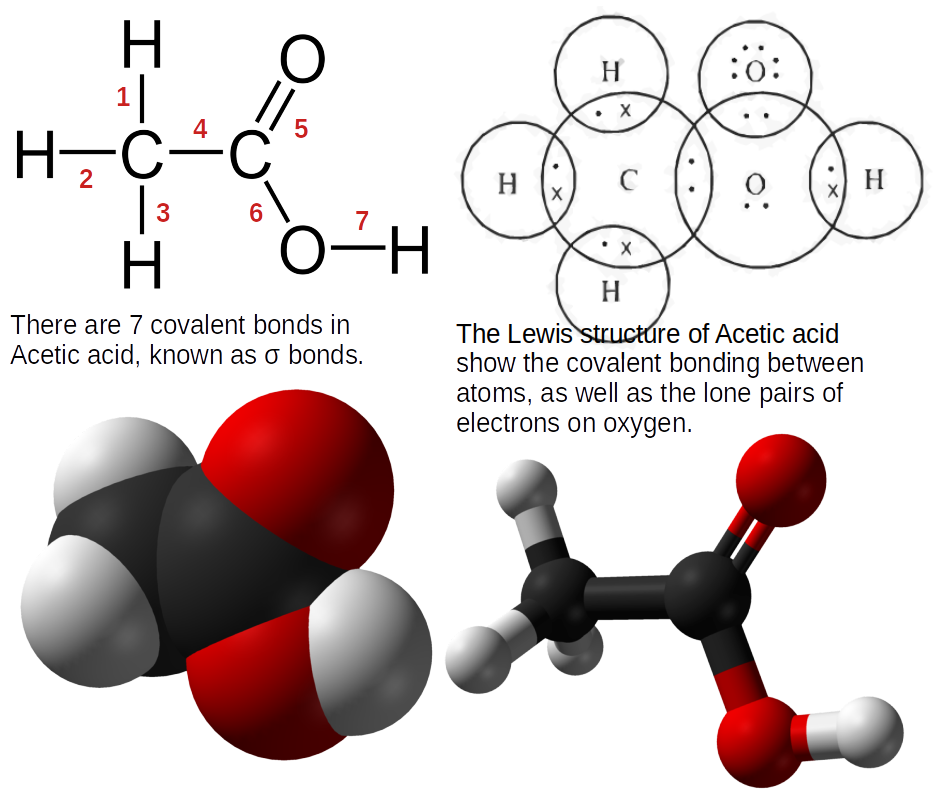 The Carbon–hydrogen bond and the Carbon–carbon bond are covalent bond as the carbon shares its outer valence electrons with up to four hydrogens/carbons, as shown in the Lewis structure. Infact, all the carboxylic acids having $\ce{R−COOH}$ are covalent.

In general, covalent compounds do not conduct electricity when dissolved in water. Though acetic acid is covalent it dissociates into acetate ions and hydrogen ions. Acetate ions are responsible for conducting electricity Thus, acetic acid is molecular (or covalent) as a pure liquid (and doesn't conduct) BUT, when it is dissolved in water, they become Ionic Solutions (some of the molecules break apart and form ions).

Please note that bonding is a scale, with ionic on one end and covalent on the other. Bonding has both ionic and covalent character. It really just depends where the bonding electrons are located - between the atoms (covalent), or on the negatively charged ion (ionic).

I also found these videos which may be helpful: Is CH3COOH (Acetic acid (Ethanoic acid)) Ionic or Covalent/Molecular? and CH3COOH Lewis Structure (Acetic acid) by Wayne Breslyn. Learn more about covalent bonds at Khan Academy and Wikipedia.

Not the answer you're looking for? Browse other questions tagged bond ionic-compounds or ask your own question.

10
Why do ionic compounds dissociate whereas coordinate complexes won't?
3
Is this the correct mechanism of the formation of the nitronium (NO2+) ion from sodium nitrate and sulfuric acid?
19
Why is an ionic bond a chemical and not a physical bond?
3
Why triiodide ion does not form ionic bond with cation having +2 charge?
2
Covalent and Ionic Bonds
0
Why do we use different arguments for determining the strength of hydracids and solubility of ionic compounds?