Can oxidizing agents be used to increase the combustion efficiency of waste oil?

Waste oil is atomized and combined with air to produce a very high temperature flame capable of melting iron. I was wondering if it's possible to further increase its combustion efficiency by mixing it with an oxidizing agent such as Sodium Perchlorate, Hydrogen Peroxide or some other oxidizer in mixable form.

It is safer to keep the process as simple as possible without the addition of perchlorates or peroxides to the oil. Perchlorates are salts with low solubility in oil; hydrogen peroxide equally is a polar compound with little affinity to form a solution with oil. Thus, the salts could clog the fuel delivery, or in case of $\ce{H2O2}$ simply yield a biphasic liquid mixture if stored in the same container as the fuel. It equally would increase the potential hazard to run such a combustion engine; perchlorates are heat sensitive and could explode when you don't want them to do so. In addition, over time residues of salts and salt residues facilitate corrosion (already a problem for the transportation of crude oil); here, the elevated temperatures could amplify the problem e.g., at the burner's nozzle, or as deposits in the fire box.

Thus, stay with the delivery of liquid oil and air. If your are lucky in terms of viscosity of the oil, you still may obtain an aerosol but not the fine mist of air and fuel as characteristic for Otto engines, slow motion at 2:56 min onward). More often, however, similar to oil driven heaters, you will rely on special burners running which bring pressurized air via fans into contact with a fine film of oil: 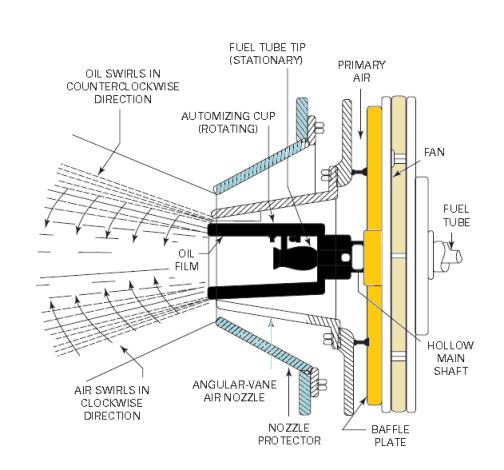 6
How can I reduce Crystallization temperature of seed oil to be used in winter as biodiesel?
1
Given a theoretical combustion engine, how can I calculate the output of this engine depending on the fuel it uses?
14
How can solids undergo combustion if it only occurs in the gas phase?
14
Can diamond undergo a self sustaining combustion reaction all the way to carbon dioxide?