Why does hydrogen burn with a pale blue flame while its emission spectral lines are red in colour?

I was studying oxidising flames and realized that sodium burns with a bright yellow flame the wavelength of which is around 588 nm. Then I searched for emission spectra of sodium and found that the lines around 588 nm are the most intense ones, so it appears yellow. The same happened with potassium.

But when I arrived at hydrogen, I knew it burned with a pale blue flame, but its emission spectral lines were most intense in the red region. So why does it still gives a blue flame?

As you see, it emits blue light too, but the red one is the most intense and so electrical discharge of hydrogen emits red light. But its oxidising flame is pale blue.

Would it burn with a red flame at higher temperature or something like that or are spectral lines not related to flame colours?

It is a very interesting question, but comparing a combustion spectrum with an atomic emission one is like comparing apples and oranges. A flame is a luminous gas phase chemical reaction where the hydrogen atoms are combining with oxygen atoms. It is a chemiluminescence phenomenon. A discharge tube emission is an atomic emission.

You posted a picture of a hydrogen spectrum from a discharge tube which consists of discrete lines in the UV, visible, and IR regions. In the same way, the hydrogen-air flame has an emission in the ultraviolet, visible and in the IR. The blue flame is not a line spectrum, as you might speculate. It is a continuum (broad band), which indicates that this is due to molecular emission in the flames, not from hydrogen atoms! This is in contrast with the alkali metals whose compounds easily atomize in the flame.

Also note that what may appear to us as a single color, like blue, is rarely a single wavelength.

There is a beautiful article by R.W. Schefer , W.D. Kulatilaka, B.D. Patterson, and T.B. Settersten on Visible emission of hydrogen flames, Combustion and Flame 156 (2009) 1234–1241. Go to Google Scholar and find it; it is open access on Google.

Look at their experiment: They view the "blue" hydrogen flames by various optical filters which block or pass certain wavelengths. See many colors are present in the "blue" flame of hydrogen. In fact most of the emission is in the ultraviolet region. 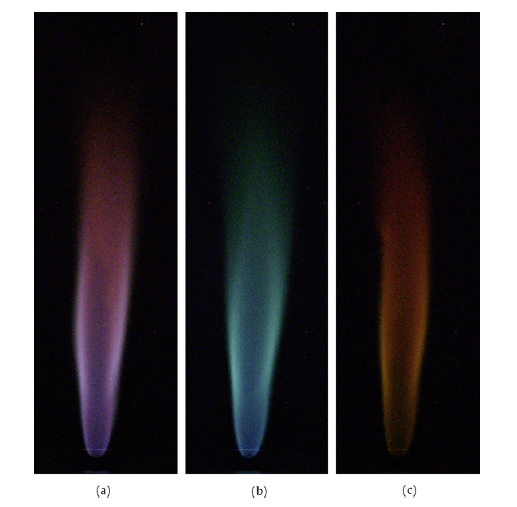 Most of the emission is in the UV and infrared as you can see from the spike near 300 nm and intense band after 700 nm. Most people cannot see beyond 700 nm. The infrared emission is due to excited water molecule or perhaps its fragments. 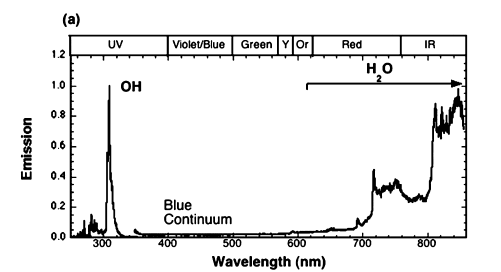 Note: The above spectrum consists of two parts, UV on the left, and visible extending from $\pu{350 nm}$ to $\pu{850 nm}$ on the right hand side, recorded separately. For this figure, the later was amplified by a factor of 6.5 with respect to the OH in the ultraviolet.

Not the answer you're looking for? Browse other questions tagged spectroscopy hydrogen atomic-structure or ask your own question.