We have seen that the silver electrodes on a piezo element are being seemingly dissolved by exposure to our mixture of $50\,\%$ hydrogen peroxide. I was wondering if we were to switch to gold electrodes instead of silver could this mitigate the issue. I have not found much if gold is resilient to $\ce{H2O2}$ and was looking here to see if anyone has some expertise.

I have no expertise, but Pourbaix does. Let's take a look at some of his diagrams which offer a hint to what is going on, with both silver and gold. Or more accurately, why gold is indeed less vulnerable to attack by hydrogen peroxide than silver.

Begin with just the diagram for hydrogen and oxygen in aqueous solution. Ross[1] gives a diagram that includes hydrogen peroxide as well as the stable species hydrogen, oxygen and water (figure from this reference): 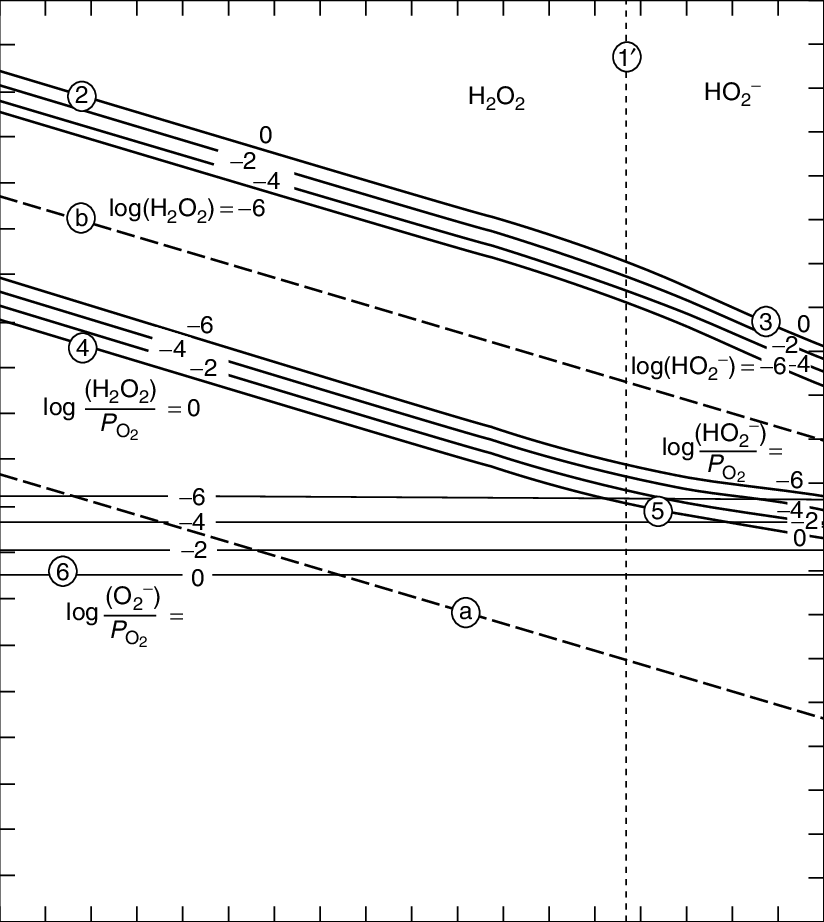 Now let's see the diagram for silver. There is some variation from different sources, but Wei et al. [2] show the following, which is typical. 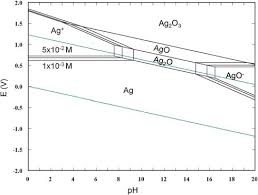 The boundary between elemental silver and various oxidized species (essentially, dissolved silver ions in acid and silver oxides in basic solution) actually lies below the line for water oxidation to oxygen, so in principle even dissolved air could attack silver given enough time, let alone the more powerful oxidant hydrogen peroxide. In fact, at the potentials where hydrogen peroxide appears in the diagram from Ref. 1, one may even see the oxide of silver(II)! We are lucky, actually, that the kinetics is slow enough so the silver electrodes have some lifetime.]

Now it is time to go for the gold. Huayhuas-Chipana et al. [3] adopted the diagram below from Ref. [4], showing that gold is not oxidized at all when water is oxidized to elemental oxygen (the higher of the two red lines) and that even hydrogen peroxide with its potential at half a volt higher is only on the borderline of beginning to oxidize gold. More over, the soluble cation $\ceAu^{3+}}$ appears only in fairly string acidic solution, further hindering any dissolution of gold. Thus gold would indeed be expected to hold up more strongly in your hydrogen peroxide solution. 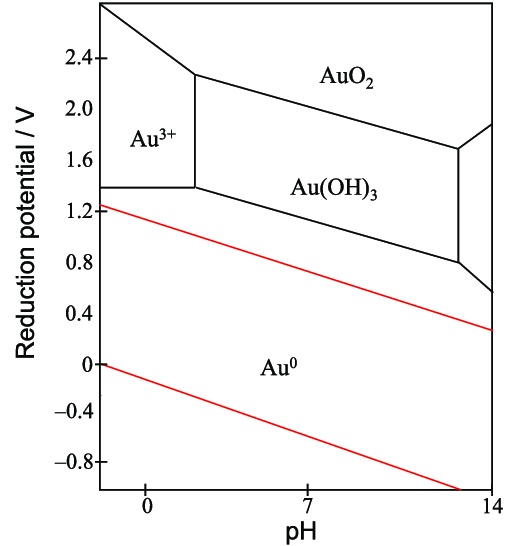 Not the answer you're looking for? Browse other questions tagged inorganic-chemistry redox or ask your own question.