What exactly does it mean for the reaction of superoxide with non-radicals to be spin-forbidden?

The reaction of superoxide with non-radicals is spin forbidden. In biological systems, this means its main reactions are with itself (dismutation) or with another biological radical such as nitric oxide (NO) or with a transition-series metal.

I know that one of the configuration bands is paired, and one is unpaired. Does the unpaired one have to bond with an unpaired one from another radical? What does this also say about reactions of the excited state of singlet oxygen (shown in the middle below) with non-radicals?

Also, is superoxide a doublet?

What exactly does it mean for the reaction of superoxide with non-radicals to be spin-forbidden?

For clarity, let's start with a simpler case. If we take a ground state singlet molecule (singlet means all electrons are paired) and we irradiate it with photons, photon absorption will excite an electron to an excited state. Will the excited state be a singlet or triplet immediately after it is produced? For the transition to the excited state to occur readily it must be spin-allowed. That means that spin must be conserved. If we started with a singlet, then our excited state must still be a singlet. In that excited state the excited electron will still have its spin paired with the electron that was its partner that remains in a lower energy orbital. Creation of a triplet state, where the excited electron and its ground state partner no longer have their spins paired is spin-forbidden and is therefor much less likely to occur. Spin must be conserved.

Well rules are made to be broken. What can we do to increase the probability of a singlet -> triplet conversion that is formally spin-forbidden. Spin-Orbit coupling (the coupling of the electron spin with the orbital angular momentum of non-circular orbits) is our way out. We need to find a spot where the Morse potential curves overlap for both the singlet and triplet. Then, if there is a large spin-orbit coupling interaction we can readily cross over from singlet to triplet, or back. 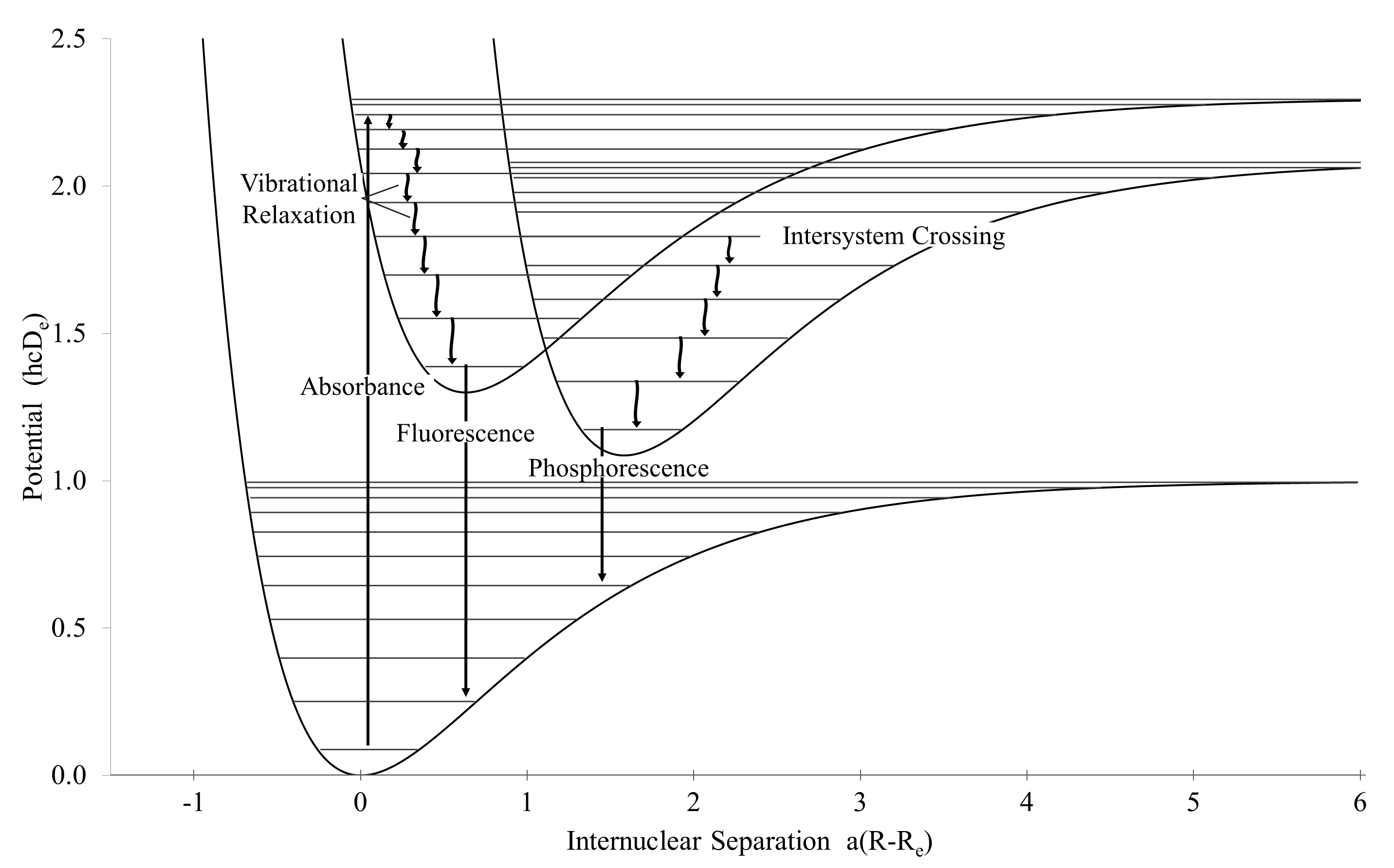 Large atoms such as bromine and iodine, as well as transition metals with unpaired electrons have large spin-orbit couplings. If such groups are attached to our molecule of interest, then spin need not be conserved and formally "spin-forbidden" reactions become more likely.

Yes, if spin is to be conserved.

What does this also say about reactions of the excited state of singlet oxygen (shown in the middle below) with non-radicals?

The singlet oxygen shown in the middle of your figure ia a singlet species and will react readily with other singlet (non-radical) molecules.

Not the answer you're looking for? Browse other questions tagged radicals or ask your own question.

2
What is the state of the oxygen free radical in the following reaction?
4
Can a free radical be created by chemical reaction of non-radical species?
7
Why does the light catalyzed radical addition of tetrachloromethane to an alkene produce only a single regioisomer?
11
Mechanism of radical cyclisation to form hydroazulene core
1
How does the human body deal with free radicals it creates itself?
2
How does conversion of a free radical to a carbonyl compound take place? Unsure about mechanism
1
Chemical reaction of radicals with different multiplicity