$\ce{FAD}$ can undergo single-electron reduction to form a stable radical, which can then be reduced again to $\ce{FADH2}$. This is supposedly possible due to resonance stability, where the unpaired electron is delocalised amongst the molecule. In $\ce{NAD+}$ however, the free radical formed is very unstable, so it can only undergo hydride-mediated (or two-electron) reduction.

This sounds simple by itself, but the diagram I found (shown below), in my opinion, contradicts this claim. 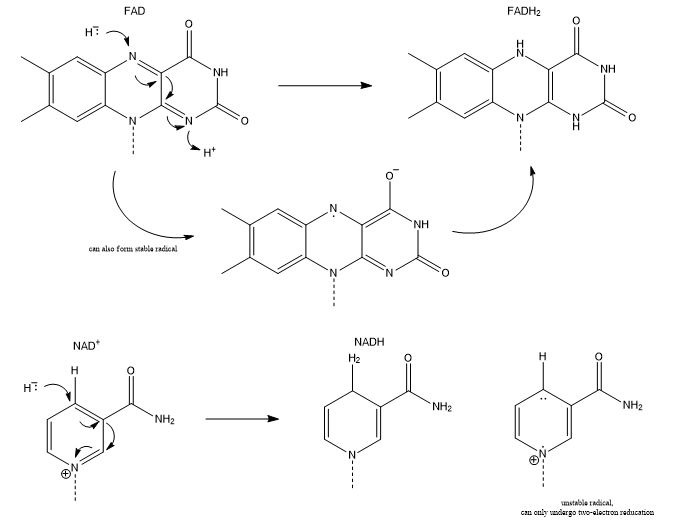 It seems to me that $\ce{NAD+}$ is just as capable in forming resonance structures as $\ce{FAD}$; the double bonds are adjacent to the unpaired electron and the lone pair on the carbon (in $\ce{NAD+}$) should be in a p-orbital, which also allows it to be delocalised. It is true that $\ce{FAD}$ is larger and has more aromatic rings, which makes it a better candidate to undergo single-electron reduction; however, $\ce{NAD+}$ should ALSO be able to form radicals, albeit not as often. Contrary to that, it is said that the $\ce{NAD}$ radical is very rare or even non-existent.

The source I mainly used (due to lack of others) is this Chemistry LibreTexts site. If anyone can point out the reasoning behind this oddity, I would appreciate it very much.

Browse other questions tagged biochemistry resonance organic-reduction or ask your own question.

36
Natural Bond Orbital analysis: Significance of stabilization energy determined by 2nd order perturbation
7
Why is there a need for resonance?
8
Trying to understand the statement: 'Resonance is not a flickering between the contributing states. '
6
Why is NAD+ regioselectively reduced at C-4 to form NADH?
3
Why does the reduction of NAD+ to NADH change the absorbance so much, and cause fluorescence?
3
Why can't terminal alkynes take part in Birch reduction?
1
Why hyperconjugation can't stabilize carbanion?