Is this the NMR spectrum of 3-methyl-1-butanol? 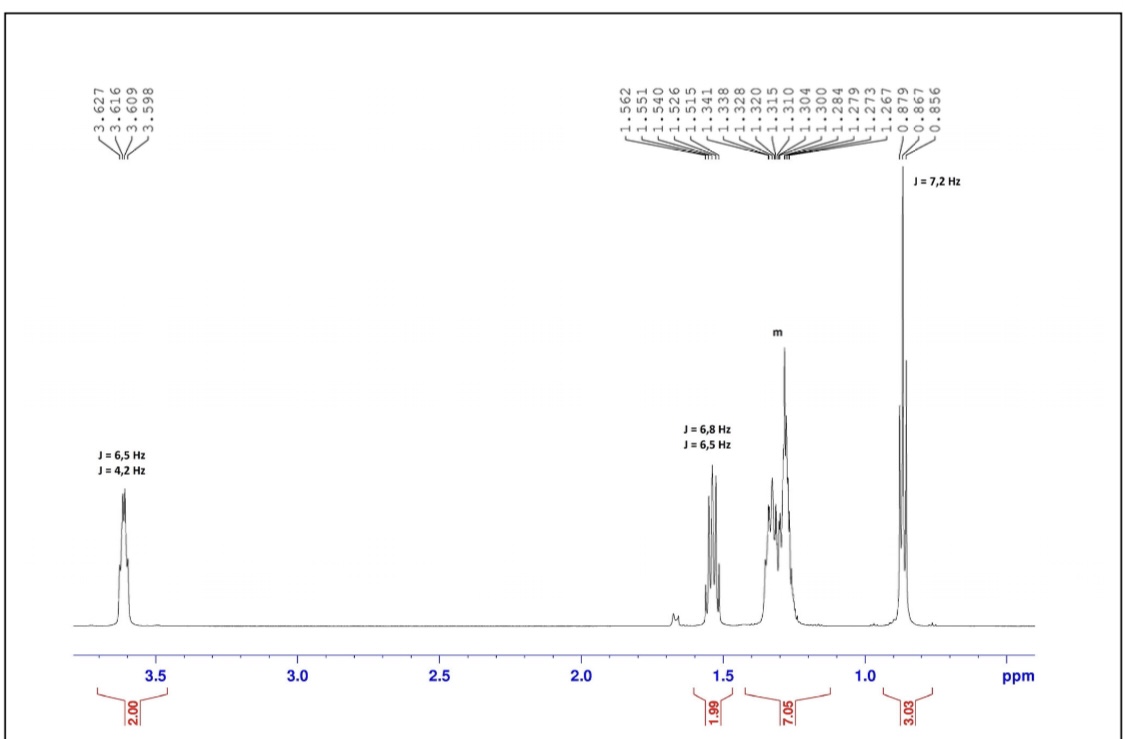 It is a $\ce{^1H}$-NMR spectrum and I think the signal near 3,61 ppm is the CH2 group next to the hydroxy group. But which signal is the hydroxy group and which protons are in the multiplet?

In short: is the spectrum consistent with 3-methyl-1-butanol? No. The triplet splitting and integral of the signal at 0.86ppm is inconsistent with an isopropyl sidechain. This suggests a methyl group attached to a methylene, $\ce{-CH2-CH3}$.

The signal at $\pu{3.6 ppm}$ has a chemical shift symptomatic of an alcohol, as you suggest. It has diagnostic splitting of $\pu{4.2 Hz}$, also consistent with coupling to the alcohol peak. So, this peak is a doublet of triplets..... which makes it look a bit like a quartet. To see this coupling, the sample needs to very dry to eliminate exchange decoupling. So where is the alcohol peak? In the absence of any exchange, and in chloroform (most likely solvent used given the spectrum shown), alcohol peaks usually come in the region of about $1.2$-$\pu{1.5 ppm}$. So possibly under the multiplet. Which would then leave you with 6 protons to account for......or $3 \times \ce{CH2}$ groups. The peak at $\pu{1.5 ppm}$ has coupling that suggests it is attached to the $\ce{-CH2OH}$, giving a $\ce{-CH2CH2OH}$ group. There are 14 protons in all. You've got a $\ce{-CH2-CH3}$, a $\ce{-CH2CH2OH}$ and the rest are probably $\ce{-CH2\!-}$. How might you put them together?

And to answer a follow-up question below, the splitting at 1.54 is from the protons on the beta carbon, and is a triplet of triplets. When coupling constants are close (6.5 and 6.8) this will appear as a pseudo-pentet, as shown below:

11
Why are all the phenyl protons in benzyl alcohol equivalent in the ¹H-NMR spectrum?
9
1H (proton) NMR spectra for alkanes
3
NMR spectrum of cyclohexanol - hints on integration
3
Does this NMR show the carboxy group?
0
Interpretation of an H NMR
19
Multiplet shape in proton NMR of morpholines
4
Proton NMR spectrum of aminocaproic acid
3
1H NMR splitting of 3-methyl-1-butanol