Uses of Fourier / Laplace transforms in chemistry (apart from spectroscopy)

I'm just now learning about the Fourier transform, which seems like a pretty useful tool, and I know it has uses in spectroscopy (e.g. FTIR) since that is what Google shows when searching for applications of the Fourier transform in chemistry. Interestingly, I found out that the Laplace transform can be used in chemical kinetics.

I was wondering if there were any other cool uses for the Fourier/Laplace transform in chemistry? And if so, any links to resources to learn more about that particular use would be appreciated.

For the principle «what is small, gets large; what is large, gets small» when applying Fourier transformation and inverse Fourier transformation, it is one important tool in crystallography to relate between the regular arrangement of molecules in crystals at Angstrom scale, and the intensity recordings on film (old school) and electronic detector (very often area CCD) where signals are much wider apart from each other. (This is often is referred to the relationship between direct and reciprocal space, too.) Thus, scrutinizing the diffraction pattern's symmetry from special directions (figure b) below) allows the trained eye to relate to possible symmetries of the crystalline sample (a) , and the ratio of vector lengths describing the smallest unit of a crystal structure, the unit cell. Today, assessing position and intensities of these data is typically assisted by a computer. 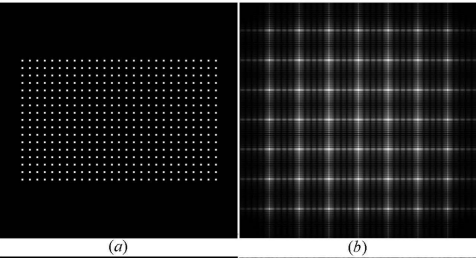 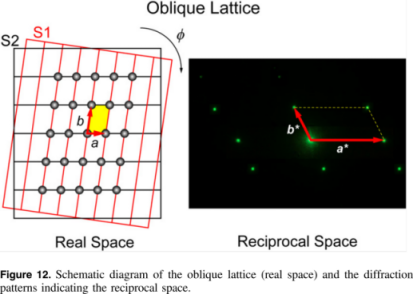 The Fourier Transform is important in many applications beyond spectroscopy, for instance in computational and theoretical chemistry. One example encountered in learning chemistry is in quantum theory. The FT is intimately related to the Heisenberg Uncertainty principle (for instance for position-momentum). You might want to look at a libretext on the subject.

As implied in other answers, a practical utility of the FT lies in revealing or exploiting regularity in data.

When evaluating integrals in some computational QM problems, application of the FT can provide a time-saving device. See for instance Ref 1, a thesis detailing this.

A very important example of its application in computational chemistry is in computing the Ewald summation:

If you want to evaluate a Madelung constant you might also employ the FT.

You should explore a little bit more about discrete Fourier transform (DFT). That is what is used in spectroscopy and analytical chemistry. FT is for continuous function, DFT is for sampled data. The most important thing to note is that there is no loss or gain of information before or after (D)FT of any data.

FT finds extensive use in denoising analytical chemistry data. All instrumental signals have noise to some extent. In most cases, the signal is present at low frequencies and noise has higher frequencies. You can cut-off high frequency noise and do an inverse transform to get a signal which has higher signal to noise ratio.

FT techniques can resolve overlapping peaks if you know what broadened the signal. Visit Prof. Tom O'Haver website or see his book (free pdf). Window 1 (top) is the broadened signal which could be a chromatogram or a spectrum, Window 2 is a function which caused broadening of the peaks. Window 1 (bottom) is "recovered" signal. 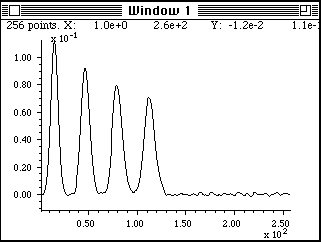 Laplace transforms are used all the time in Chemical Process Control (I'm a chemical engineer, not a chemist). Most (open-loop) chemical processes can modeled as a first order system, possibly with delay. A tank being heated using a heat-exchanger on its input will show the same dynamics as a you see in reaction kinetics.

There are various ways to measure the dynamics of a process. Once you do that, you can characterize them as first-order + delay and use that Laplace process description to get a dynamic model of the process.

Non open-loop processes (whether because they are under control or because they have a natural loop in the process) can also be modeled using Laplace equations.

Just to add some more information you may find useful.

I have found the use of Laplace transforms for the analytic solution of reaction mechanisms in Chemical Kinetics and in Dynamic Electrochemistry. Basically, the Laplace transforms are used as a method to simplify the solution of a set of coupled differential equations that in this case are assoacited with a reaction mechanism or the solution of the reaction-diffusion equations. In the case of Chemical Kinetics you can check the introductory article Andraos, J., Streamlined Approach to Solving Simple and Complex Kinetic Systems Analytically, J. Chem. Educ., 76, 1578 (1999) You can also find some information in advanced Chemical Kinetics textbooks as Jeffrey I. Steinfeld, Joseph S. Francisco, William L. Hase, Chemical Kinetics and Dynamics 2nd ed., Prentice Hall (1999) or Connors, Kenneth A. K. A. Connors, Chemical kinetics : the study of reaction rates in solution, Wiley-VCH (1990).

Fourier transforms are also used in Quantum Chemical Dynamics for the propagatiion of wave-packets to describe the molecular motion on one or more potential energy surfaces.