Given Fischer's projections of a few stereoisomers of some compound, how can we find out if they are enantiomers, diastereomers, etc.? From what I understand, we can rotate the projections to have the same groups on the top and bottom and then compare (non-superimposable mirror images --> enantiomers, non-mirror image --> diastereomers) and we can convert to eclipsed sawhorse projections and vice-versa, could anyone explain further?

EDIT: I have a doubt in the following MCQ question from VMC's JEE archive -->

Q. Which of the following forms a pair of enantiomers? 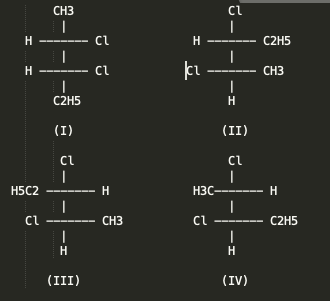 The answer is given as (D), that is, I and III. I also got this as an answer, but I also got III and IV, which is (B) as enantiomers, as I and IV were identical in my solution

Browse other questions tagged stereochemistry or ask your own question.