Why Does A Brønsted–Lowry Acid Accept Proton from Stronger Acid? 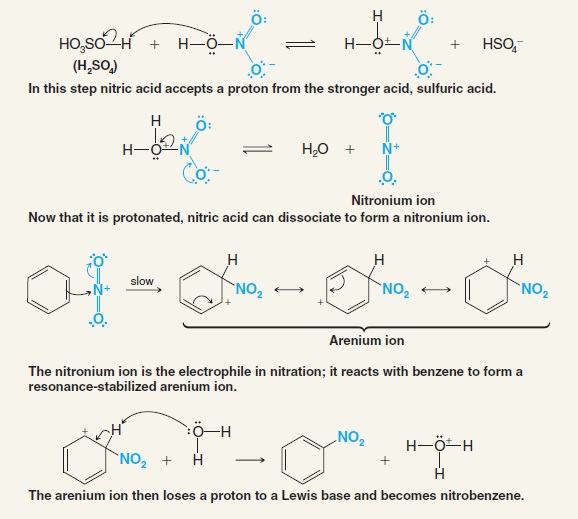 This is mechanism of Nitration of Benzene. In the first step, Nitric Acid (pKa = -1.4) accepts a proton from sulfuric acid which is stronger acid (pKa = -9). According to Brønsted-Lowry theory we consider acids dissociate increasing proton concentration and bases dissociate increasing hydroxy concentration. On the other hand bases also accept proton from acids. Therefore should we accept nitric acid as a base in this case ? If not, why does an acid accept a proton from another "stronger" acid ?

Nitric acid is definitely a strong acid, but that does not exclude the possibility of protonating it with a stronger acid. It can be effectively protonated by a stronger acid such as sulfuric acid. Simply because something has "acid" in its name does not mean it has to dissociate into protons and its conjugate base, or protonate something else.

Note also that even strong acids in their pure forms - i.e. liquid nitric acid or liquid sulfuric acid - can and do auto-ionize to a fair extent. So if nitric acid can react with itself, of course it can react with a stronger acid.

Echoing Dissenter's comment, don't be hung up on the name "nitric acid" to mean that it can only release a proton. It's typical reactivity is as an acid, which is why it gained that name. Most compounds will change their reactivity under different reaction conditions. Take water for example. Under acidic conditions, such as when reacted with HCl, it will act as a base, becoming protonated to form hydronium. Under basic conditions, such as when reacted with butyl lithium, water will serve as an acid, being deprotonated to form hydroxide.

There also seems to be some confusion about acid-base concepts. Arrhenius theory considers compounds that increase hydrogen ion concentration to be acids and compounds that increase hydroxide concentration to be bases. That is a very limited definition. In the reaction between nitric acid and sulfuric acid, the Brønsted-Lowry concept is more useful. Brønsted-Lowry considers any compound that donates a proton (hydrogen ion) to be an acid (sulfuric acid here) and any compound that accepts a proton (nitric acid here) to be a base.

The first step of the mechanism would not, on its own, happen to a large extent - protonating nitric acid is unfavorable, so the equilibrium would lie far to the left. However, the second step of the mechanism is highly favorable (entropically), so it quickly consumes what little H2NO3+ is produced by the first step. This drives the overall reaction forward by Le Chatelier's principle

14
How can aluminium oxide be called an acid?
1
Is ethanol an acid or a base or amphoteric?
17
Is the proton the strongest acid?
3
How can Arrhenius bases also be Brønsted-Lowry bases?
1
Conflicting definitions of Lewis acids
0
Is the conjugate base of every polyprotic acid amphoteric?
4
Why exactly is a fluoride anion a stronger base than iodine anion?
0
"HBr is donating a proton to LiOH": Why doesn't it produce LiOH2?