How to add two hydroxy groups to 1,5-diphenylpentan-3-ol with as high as possible yield? 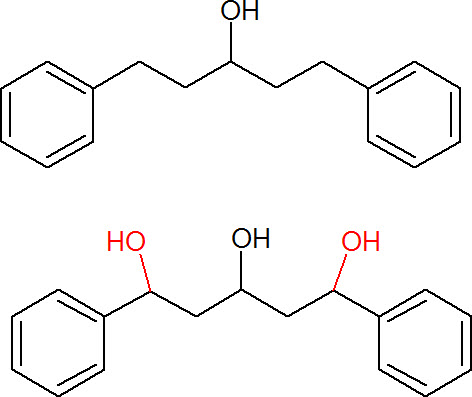 A few possibilities for direct hydroxylation:

If those approaches aren't appealing, there are various less direct routes. Radical bromination (with, e.g., NBS under photochemical conditions), followed either by direct substitution with hydroxide, or alternatively elimination followed by subsequent acid-catalyzed hydration, would likely work well. If you need stereoselectivity, there are are numerous epoxidation reactions (that is, after bromination and subsequent elimination) that would likely be appropriate (Sharpless, Jacobsen, Shi, and certainly numerous others). Conveniently, your molecule would already have the allylic alcohol necessary for Sharpless asymmetric epoxidation, should you want to go that route. In any case, it should be possible to open the epoxides at the less hindered carbon with a suitable hydride donor (e.g., LAH) to yield the alcohols after work-up.

Actually, hell with that. I recall that organolithium compounds may be carefully oxidated at very low temperatures by different things, namely halogens, sulfur and - tadam! - molecular oxygen.

$\ce{BuLi}$ should selectively deprotonate each benzyl position once, and then the lithium compound may be very carefully oxidized with molecular oxygen at very low temperature followed by water hydrolysis into peroxide. Reduction of the peroxide should give the target compound, but it highly preferable to do it in basic conditions and avoid contact of target compound with acids as it looks to be able to dehydrate in acidic conditions. Another possible direction is to transform organolithium compound into boric acid and then oxidate it with hydrogen peroxide in basic conditions.

It's worth trying Greg's suggestion to do benzylic oxidation or bromination/hydrolysis. If it works it's cool, but a lot of times trying to change 2 functionalities of a molecule in one go has poor results with poor yields and formation of mixtures of products. Additionally you might find that you will need to protect your alcohol first (that's more possible with permeakra's enolate oxidation approach).

Another approach could be to start from acetone or an acetone equivalent (like its silyl enol ether) and do a double condensation with benzaldehyde. I'm sure you can find similar reactions in the literature.

2
Tips for Improving Synthesis
1
Making 1,3,5-Tribromobenzene from Phenol
5
Farnesyl Diphosphate: Chemical commercial synthesis
7
Evaluation of a synthesis from aspirin to paracetamol from this Nile Red video
3
What results from the reaction of 5-bromopentan-1-ol and NaOH?
4
Synthesize coumarin from 4-allyl-2-methoxyphenol (eugenol)
5
Reduction of 1,4-benzoquinone in the synthesis of 1,5-diazocane
4
How do I prepare 2-(3-azido-3-oxopropoxy)ethyl methacrylate from methacrylic acid?