One of the sections about retrosynthesis in Warren's book addresses how to access $\gamma$-hydroxy carbonyl compounds like ZM181. This is again one of the examples to advice the reader to check the results for plausibility: while epoxides often may be a suitable building block, here, the intermediate would react further with the ester present to yield a lactone (second line) instead: 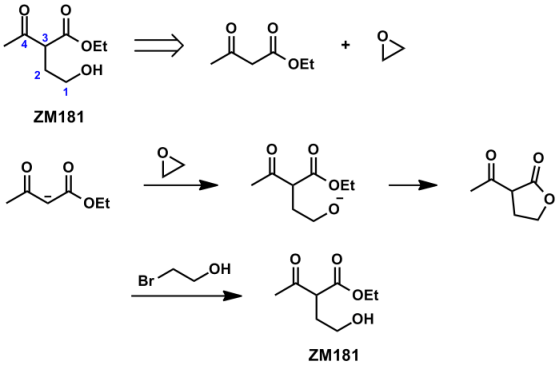 In the edition accessible to mine, Warren apparently does not detail out if an alternative approach with chloro- or bromoethanol (third line) to yield ZM181 were viable.

Question: Would be the approach of the third line, chloroethanol and ethyl acetoacetate to yield ZM181, still viable outside academia, too?

I'm aware the intramolecular transesterification to yield a five-membered cycle needs to be considered as a possible product for both approaches. On the other hand, I think either route could be favoured by choice of the reaction conditions, i.e.

Browse other questions tagged green-chemistry retrosynthesis or ask your own question.