I understand that basicity is a thermodynamic quality. Not a kinetic factor. So it doesn't matter if it takes a million years for the proton to reach the site of basicity; time is nothing in thermodynamics. We only care about the initial and final state. So this suggests to me that steric hindrance does NOT affect Brønsted basicity

In addition, the hydrogen proton is quite small. So I wouldn't expect it to be particularly sterically hindered by anything (unless we're in solution and the proton is heavily solvated). Still, once the proton reaches the site of basicity, it's reached it, and if I understand thermo correctly, thermo doesn't deal with anything in the middle of the energy graph. Only the points on the two ends.

Also it would be nice if one could comment on the difficulty of this problem in general. Just curious. Personally I think it's a fascinating problem. (On the other hand I'm not the one actually doing the problem).

Anything that stabilize one of the species in an acid-base equilibrium influences the free energy difference between the reactants and products, which alters the equilibrium constant:

You forget the solvent. Acidity and basicity depend on the interaction between the acid/base and the solvent. While steric hindrance will decrease the rate solvent access, it more importantly also decreases solvation of the acidic or basic site. More steric hindrance prevents additional solvent molecules from reaching the site to stabilize an ionic conjugate acid or base.

Consider the difference in $\mathrm{p}K_a$ between methanol, ethanol, 1-butanol, and tert-butanol. These are equilibrium constants, so they most certainly derived from thermodynamic phenomena!

The difference between methanol, ethanol, and 1-butanol (all primary alcohols) is small, while t-butanol has a larger pKa. If sterics had no effect, then both butanol isomers should have similar acidities since both isomers have similar inductive destabilization of the conjugate base by electron donating alkyl groups.

However in methanol, ethanol, and 1-butanol, more water molecules can solvate the alkoxide anion conjugate base, stabilizing that conjugate base more than the conjugate base of tert-butanol, which due to sterics cannot have as much solvation of the anion.

Now, gas phase acidities, in which there is no solvent, should have no solvent and solvation effects, and thus no (or at least reduced) steric effects.

Sterics can affect basicity not only through solvation but also through inhibition of resonance.

In the case of meta-xylene with an $\ce{-NH2}$ group between its methyl groups, 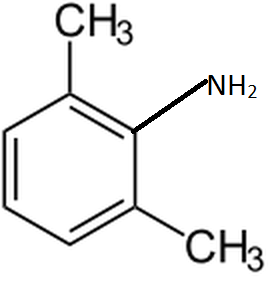 resonance is inhibited because the methyl groups prevent the amine group from adopting a perfectly planar conformation. This inhibition of resonance decreases the electron-withdrawing capabilities of the aromatic ring. As a result, electron density is concentrated on the amine group, and meta-xylene with such a configuration is unusually basic.

Not the answer you're looking for? Browse other questions tagged acid-base thermodynamics or ask your own question.

-2
How strong is 2,4,6-trinitrobenzenesulfonic acid?
1
Why does the ortho effect not work here?