I agree that the product is a product.

However, can't there be another product? Specifically, can't the methyl group by the bromine have an anti and beta hydrogen relative to the bromine?

So shouldn't there be two products? 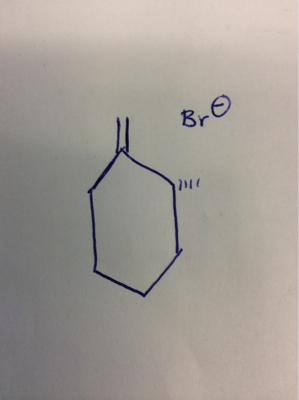 A reasonable chemist would be on the lookout for two products, especially given that E2 elimination from 1-bromo-1-methylcyclohexane produces some methylenecyclohexane

In the transition state for the E2 elimination the pi bond is already partially developed. This means that the relative thermodynamic stabilities of the products will play a role in determining the product distribution. Since more highly substituted olefins are thermodynamically more stable than less substituted olefins, one would predict that the product with the double bond internal to the ring would predominate over the analogue with the external double bond.

Reaction temperature, base size, steric constraints around the various hydrogens that might be involved and the numbers of the various hydrogens all factor into the final product ratio, but these effects are usually secondary unless you change circumstances so much that the reaction mechanism changes and shifts away from E2.

If the elimination occurs via an ${\mathrm{E_2}}$ mechanism, the other endocyclic double bond (i.e., the one between the two methyl bearing carbons) cannot be formed, as the $\ce{C_2}$ $\beta$-hydrogen will not be anti-periplanar to the $\ce{Br-}$ leaving group. That said, the other possible elimination product you've identified, with the exocyclic double bond, is entirely possible. However, this would be the Hofmann product, as it contains the less-substituted double bond. The major product of an elimination reaction is typically the Zaitsev product, which contains the most-substituted double bond. The Zaitsev product is the thermodynamic one (as the more-substituted alkene is typically more stable), while the Hofmann product is the kinetic one (as it results from a base abstracting a more sterically accessible or otherwise more acidic hydrogen). The Hofmann product can be obtained if a sterically bulky base is used, as this raises the energy of the transition state due to steric hindrance between the approaching base and the substrate molecule, and puts the reaction under kinetic control (assuming reaction temperature is controlled such that the $E_a$ for the thermodynamic pathway is prohibitively high). $\ce{NaOEt}$ is not bulky, so we expect the Zaitsev product (as given in the reaction scheme you cite).

If an $\mathrm{E_1}$ mechanism occurs, a tertiary carbocation intermediate is generated, and the double-bond is likely to form between the two methyl bearing carbons, as this would give the maximally stable tetrasubstituted alkene, and the requirement for anti-periplanarity is lifted. That said, $\mathrm{E_1}$ reactions are not favorable given a high concentration of strong base, so I would expect $\ce{E_2}$ to predominate, assuming at least a stoichiometric amount of $\ce{NaOEt}$ is present.

(Note that, with cyclohexanes, the issue is slightly more complex, as the anti-periplanarity requirement of the $\mathrm{E_2}$ mechanism requires the leaving group to be axial, which in turn necessitates a ring flip that has an associated energy barrier. Hence, in theory, the reaction with a cyclic molecule may be more likely to be kinetically controlled under a wider range of conditions.)

Yes that should be correct. Your product is less favoured but still likely. In fact I guess, ( I am not near a database to confirm that but you could try it) in reality you get the E1 product too. So a "nice" mixture of at least 3 products

Not the answer you're looking for? Browse other questions tagged organic-chemistry reaction-mechanism cyclohexane or ask your own question.

26
Hypothetical: What happens to water as pressure increases to infinity?
1
How to determine the stereochemistry after elimination of anti-1-bromo-2-methylcyclohexane?

4
Conformations of butane
51
Is carbon dioxide organic or inorganic?
5
Products of radical bromination and mechanism
1
Is this reaction of 4-chloro-1,1-dimethylcyclohexane SN1, SN2, E1, or E2?
1
How can you calculate ring strain in beta lactams for different penicillin drugs?