I heard on a lecture of an online site that, let us say, we have two orbitals (1 and 2). Now, it will be like a spherical cloud. Now, what they say is that 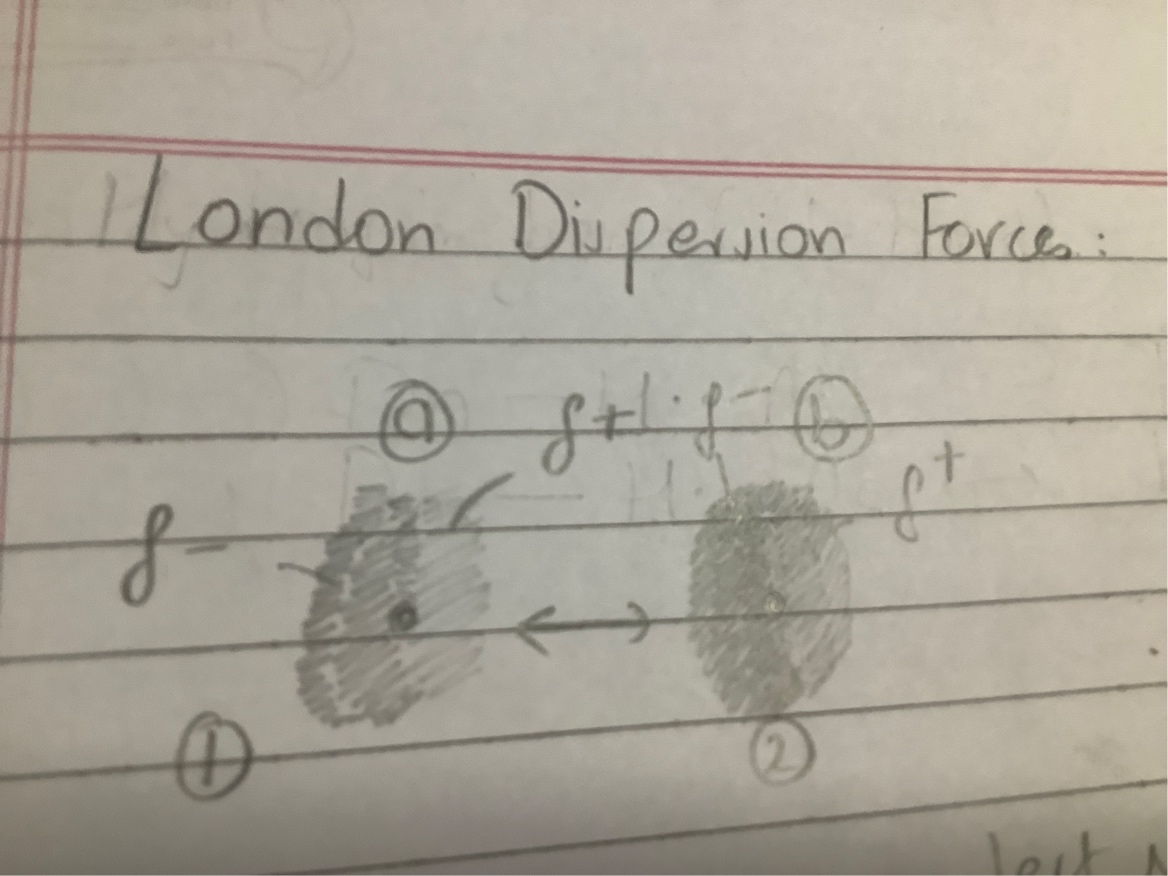 Now, my teacher on the other hand told it a bit differently: 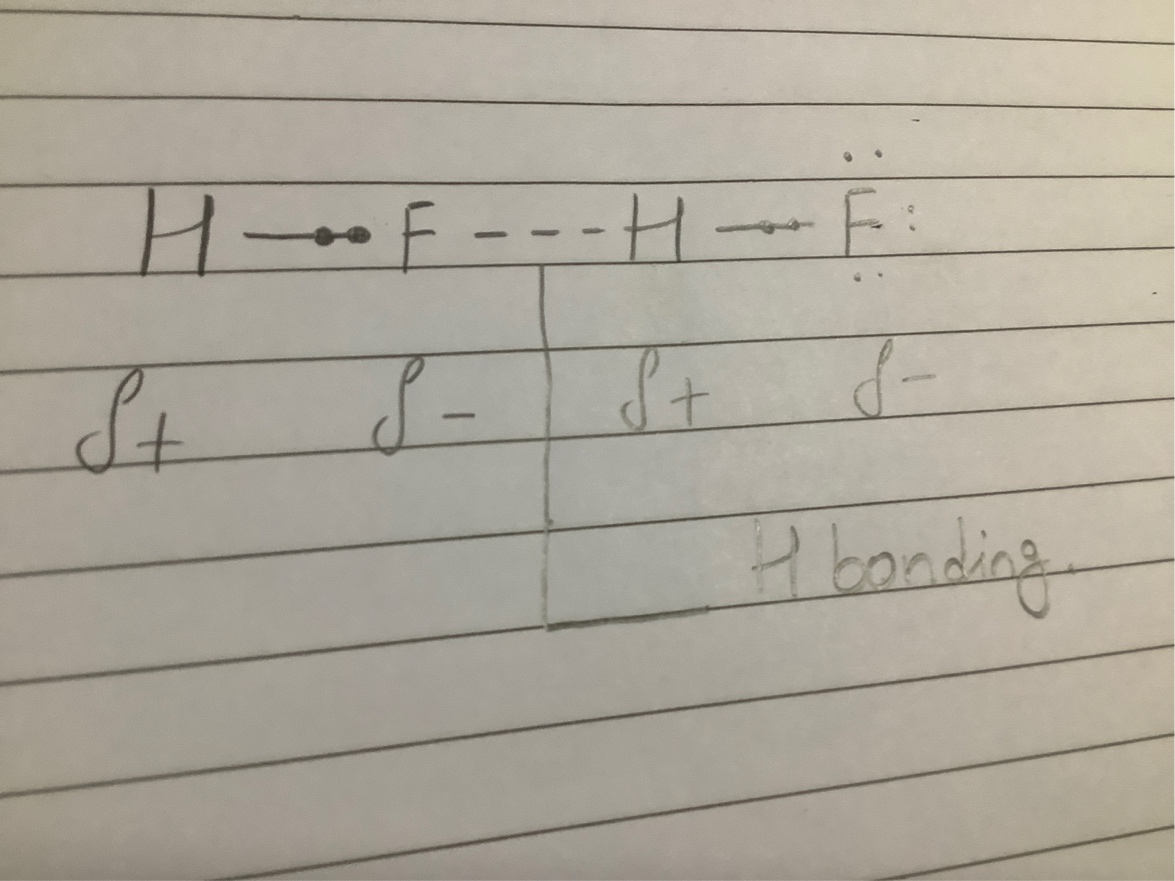 Although, OP indicated the confusion regarding $\delta^\pm $ charge compared with electronegativity, the text body indicated whole lot of confutations over interatomic/intermolecular forces. Thus, I start with the electronegativity.

According to IUPAC Gold Book, electronegativity is the concept introduced by Linus Pauling as the power of an atom to attract electrons to itself. There are several definitions of this quantity. However, Wikipedia gives a simple to understand version better suited for OP:

Electronegativity is the measurement of the tendency of an atom to attract a shared pair of electrons (or electron density).

Now, I think I have addressed the OP's main confusion:

My confusion is that if $\ce{F}$ is more electronegative than $\ce{H}$, then, the electron should be present more towards the $\ce{H}$ side.

On the other hand, the London dispersion force is also one of the intermolecular forces, but is the weakest among them and occurs between atoms as well. For example, why do you think gaseous $\ce{He}$ become a liquid when the temperature is lowered sufficiently? You can find the answer in chem.purdue.edu:

The London dispersion force is a temporary attractive force that results when the electrons in two adjacent atoms/molecules occupy positions that make the atoms/molecules form temporary dipoles. Thus, this force is sometimes called an induced dipole-induced dipole attraction. London forces are the attractive forces that cause nonpolar substances to condense to liquids and to freeze into solids when the temperature is lowered sufficiently.

An atom or a molecule can develop a temporary (instantaneous) dipole when its electrons are distributed unsymmetrically about the nucleus because of the constant motion of the electrons (e.g., the image 1 of OP's text). The explanation can be depicted in an image: 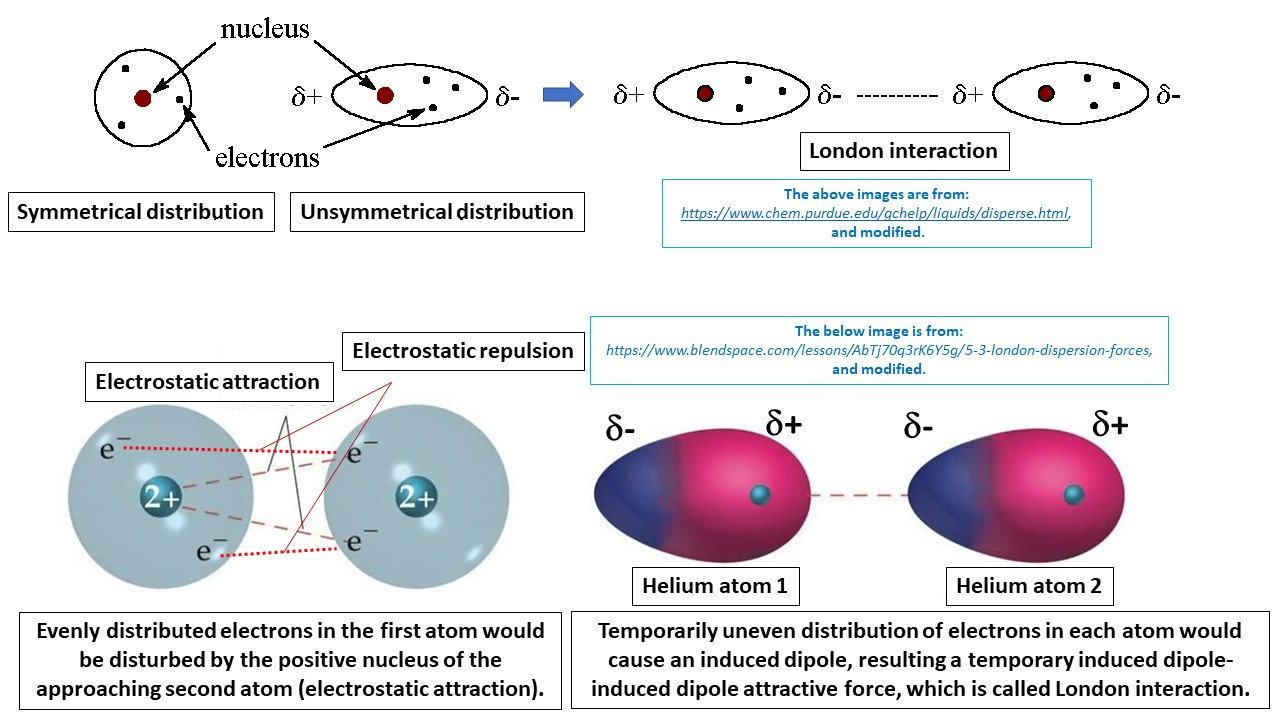 For instance, assume two helium atoms approaching each other. When they get closed to each other, the electrostatic attraction force between the nucleus of first $\ce{He}$ atom with two positive charges and the two electrons in the second atom causes each atom to polarize (creating an induced dipole in each atom). Note that at the same time, there is an electrostatic repulsion acing as well between electrons of each other as depicted in the image above.

Also, London dispersion forces are depend of the molecule's polarizability (The ease with which the electron distribution around an atom or molecule can be distorted is called the polarizability). London dispersion forces tend to be stronger between molecules that are easily polarized, but weaker between molecules that are not easily polarized.

Not the answer you're looking for? Browse other questions tagged physical-chemistry quantum-chemistry redox bond ions or ask your own question.