How to detect if a beverage has Sucralose or aspartame?

There is a drink that claims to be sweetened with stevia, but I think I taste Sucralose in there even though it is not listed on the ingredients.

Is there any easy way I could test for the presence of Sucralose to confirm my hunch?

Here's the structure of sucralose

and here is the structure of aspartame 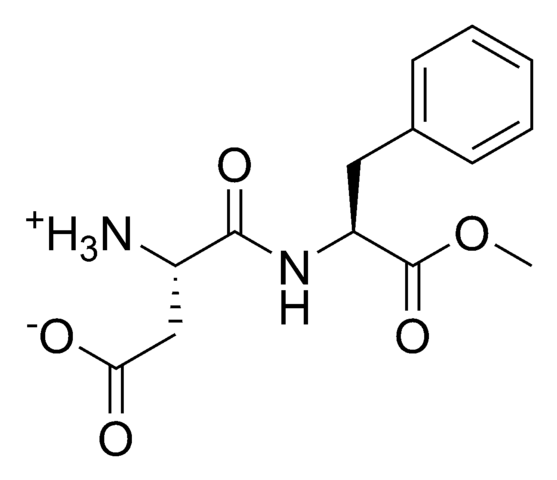 They are very different one from the other and should be easily separable. You can do a "poor man's" separation using paper chromatography. Aldrich sells both of these materials, but I'm sure you could find them much cheaper at a local Health or Health Food store. Get the samples and some filter paper. You'll need some solvents, a tank (preferably glass) with a lid, some filter paper coated with a fluorescent material (as an easier, but more expensive alternative, you could always buy some TLC plates from a chemical supply house) and a black light. Put one of the solvents in the tank so that it is 1/8 - 1/4" deep. Put the top on the tank and let it equilibrate. Make dilute solutions of your known samples using the same solvent that's in the tank. Using the tip of a needle or a toothpick place a small spot of each of the dissolved materials on the filter paper, put the spots about 1" apart and high enough above the bottom edge of the filter paper so that they will be above the solvent level when you place the filter paper in the tank. Give the spots a moment to dry and then put the spotted paper in the tank. Watch as the solvent level climbs up the filter paper (or tlc plate) and remove the filter paper when the solvent is about 3/4 of the way up the paper or plate. Let the paper or plate dry and then examine it with the black light. The paper should fluoresce under black light except where the two spots have migrated up to. The spots cover the fluorescent material and will appear as dark spots under the black light. If you got a good separation between the two spots stop here and repeat the experiment putting a spot of your diluted drink on a new piece of filter paper along with spots of the two known materials. Rerun it in the tank and see if there are any spots in your drink that match either of the spots from the two known compounds. If there is no match, then sucralose or aspartame are not in your drink. If there is a match, then whichever spots matched might be in your drink - more advance experiments will be needed to further analyze the situation. If you didn't get a good separation between the spots for the two known compounds to begin with, start over and repeat with different solvents until you do get a separation.

I think it would be not an easy task. Aspartam does not contain any special groups, just a carboxyl, amide, phenyl... Nothing that you would not find in the beverage ingredients. In case of sucralose maybe you can search for some tests for chloroalkanes.

"the reaction between silver nitrate and certain organic halides (those compounds containing chlorine, bromine, or iodine) results in the formation of a silver halide precipitate as a positive test for organic halides." (http://www.britannica.com/EBchecked/topic/108529/chemical-analysis/80788/Classical-qualitative-analysis)

But in your case I would expect the product to contain free chloride ions and therefore giving false positive result.

A trick my mother uses is to weigh it, but this only works in some very select cases and tends not to be conclusive in all but the most extreme cases.

Because some modern soft drinks are up to 1g sugar per 10mL volume, they tend to be a fair bit denser than water. Since aspartame is much, much sweeter than sugar, you usually only need a tiny bit (according to Wikipedia, only 180mg per 12 fl oz) and it doesn't increase the density as much.

Of course, this only has a hope of working if you're comparing very sweet beverages (e.g. Mountain Dew and its 0.13g/mL of sugar), and isn't terribly conclusive on iced teas or lightly sweetened beverages. Still, it's an interesting technique that doesn't rely on trying to chemically separate the two substances.

Note: If you actually do try this, make sure that both beverages are completely flat (decarbonated) and at the same temperature.

The artificial sweetener aspartame contains 2 amino acids, aspartic acid and phenylalanine. aspartame is hydrolyzed by heating it up in hydrochloric acid and the hydrolyzed product is then analyzed using paper chromatography and the standards of these specific amino acids to demonstrate their identity. A UV lamp or nynhydrin spray to locate.

first hydrolyze the aspartame by heating it in dilute hydrochloric acid until turns black... then mix it with charcoal and filter mixture in order to make a colorless solution. next ethanol:water:ammonia chromatography for 1 our under glass not touching the walls. Finally hang in a fume cupboard the paper sprayed with the locating agent nynhydrin and baked in an oven at 110 celcius for 5-10 minutes. finally the spots can be seen if the locating agent was used, if not they can be seen using a uv light.

Stevia is an extract from a plant and contains the sweeteners stevioside and rebaudioside. Both of these compounds are very sweet (about 300 times and 400 times sweeter than sucrose), but stevioside has a bitter after taste. It is very likely that what you think is sucralose is rabaudioside, since it leaves a very sweet after taste.

17
Are there notable organic compunds which look very similar but have very different properties?
2
How do i detect the compounds a plant is made of, automatically?
3
Storage of Urine
3
Detect Polyethylene
7
I (might) have accidentally combined these mold-killers at home: Any adverse reactions?
2
How to test for and remove lead(II) sulfate from a sample of 1 M sulfuric acid?